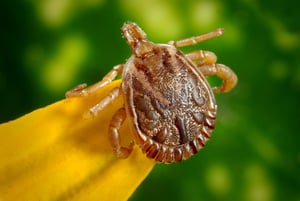 In the United States, the most common tickborne diseases are:

Within the UK, the most common tickborne disease is Lyme disease.

How do tickborne diseases occur in humans?

Ticks are great vectors for disease transmission and are the second most common vector after mosquitoes. There are more than 800 different species of ticks living in the world. They transmit disease by waiting in low vegetation, finding a suitable host in the form of a mammal, reptile or bird, then attaching themselves to the host to feed. They do this by inserting their hypostome (feeding tube) into the host’s skin and feeding off the host’s blood.  Some ticks also secrete anticoagulant, immunosuppressive and anti-inflammatory substances which prevents the host from noticing the tick has attached itself and is feeding from its blood. These substances also allow the pathogen on the tick’s hypostome to easily gain entry to the host’s body and for the body not to initiate a reaction to combat the pathogen at the time of the tick bite, so the pathogen can establish itself.  Pathogens which can be transmitted by ticks include bacteria, viruses, parasites, toxins, nematodes and spirochetes.

There are quite a few reasons why tickborne diseases are often misdiagnosed or diagnosed late. Here are some of the most common reasons to look out for when assessing a patient’s symptoms: 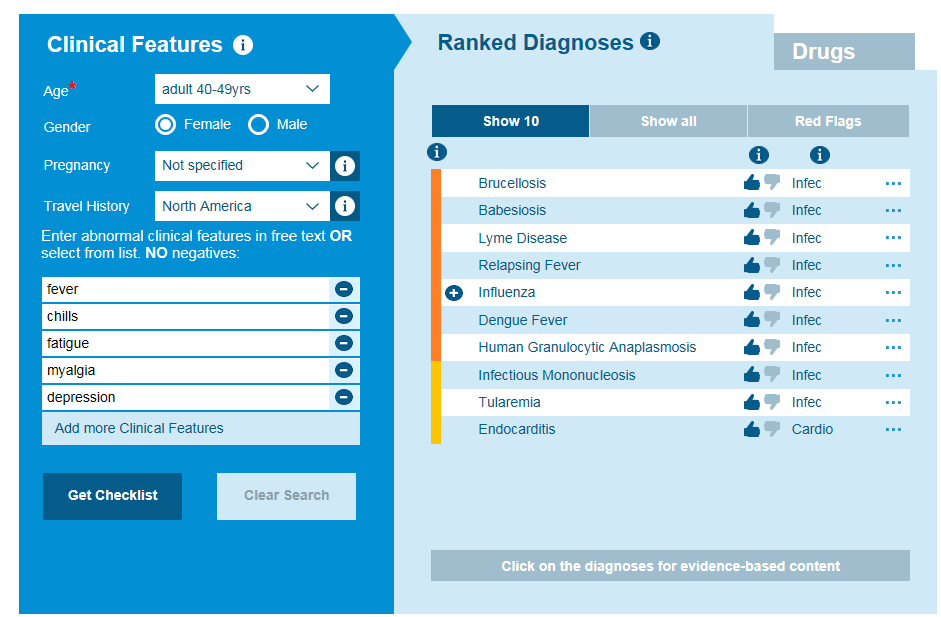 The symptoms of tickborne diseases are very easily mistaken for other, more common illnesses with similar presentations. Tickborne diseases should be considered with any of the following symptoms.

The most common symptoms of a tickborne disease are fever, chills, headache, fatigue and myalgia. These common symptoms can be representative of many other diseases including influenza. If a patient presents with these symptoms, then a travel history should always be obtained, and enquiries made as to whether the patient has had a tick bite. Enquire whether the patient has noticed a rash around the bite site or elsewhere on their body. Lyme disease, Rocky Mountain spotted fever, ehrlichiosis, bartonellosis and tularemia commonly have a rash associated with them.  In Lyme disease, a bull’s eye rash (erythema migrans) is characteristic of the condition.

Babesiosis is a parasitic infection and is the second most common tickborne disease in North America. The most common signs of babesiosis are like malaria and include a high fever, sweating, nausea, headaches and fatigue.

These symptoms can include confusion, disorientation, memory loss and depression. For example, Rocky Mountain spotted fever can present with confusion, and patients with undiagnosed chronic Lyme disease can experience depression.

Lyme disease has a wide range of symptoms, as it can affect many systems within the body, and so it mimics a wide range of other illnesses. These include amyotrophic lateral sclerosis, Alzheimer’s disease, chronic fatigue syndrome, fibromyalgia, and Multiple Sclerosis (MS). Patients presenting with arthritis symptoms including myalgia, chills, headache, lymphadenopathy, or joint pain should also ensure Lyme disease is considered before making a diagnosis of Rheumatoid arthritis. For a patient who has a chronic history and has symptoms of any of these diseases, Lyme disease should be on the differential list, and the patient should be asked whether they recall a tick bite, or if they have lived or travelled in a Lyme disease prevalent area within the last 10 years.

The number of Lyme disease cases in the UK, and of all tickborne diseases in the US, are on the rise. What’s more, these figures do not account for the misdiagnosed cases or the cases where the diagnosis hasn’t been confirmed. The geographic range of the tick vectors is also expanding as they are found in new areas. Tickborne diseases are challenging to accurately diagnose and present, as they have vague symptoms which mimic many other diseases. A high degree of clinical suspicion is needed to make the diagnosis, especially in the absence of a tick bite history. Raising awareness of tickborne diseases is needed, both among health professionals and also patients, to ensure an accurate and timely diagnosis is made.

Could I have Lyme Disease – Patient information – Isabel Healthcare Blog

Have you read our white paper on why and how to improve diagnosis? Select the button below to download the white paper now.