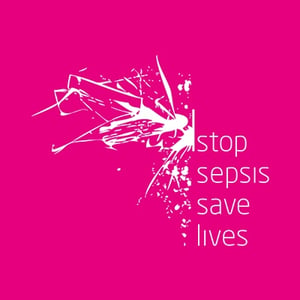 If you’ve been a long time subscriber to the Isabel blog, or followed our work from its beginnings in 1999, then you’ll know we’ve always had a strong connection to sepsis, particularly in pediatric care. Isabel Maude was nearly fatally misdiagnosed when she fell ill with necrotising fasciitis, a flesh-eating disease which when missed can very quickly become dangerously infected and cause sepsis. September 13th every year is World Sepsis Day (WSD), where we try to raise awareness globally of this life threatening emergency disease.

Sepsis occurs when the body attempts to fight off an infection but the immune system releases too many chemicals, causing inflammation of the blood vessels and tissues around the entire body. Most patients, if untreated, will then go into septic shock, where the blood pressure drops dramatically, and the tissues are irrevocably damaged, eventually leading to organ failure and death. It is sometimes referred to as septicemia or blood poisoning, but these are all the same condition, and it needs to be treated as early as possible to stand a chance of survival. Symptoms to look out for include:

1) Over 30 million people worldwide contract sepsis every year, and of those people up to 9 million die.

2) Those with a weakened immune system are at higher risk of getting sepsis.

This includes babies and children, those with other diseases such as cancer or diabetes, and the elderly. It even includes pregnant women, which was our focus last year for WSD.

3) Sepsis is the largest killer of children, often resulting as a secondary disease to a primary issue.

This is because children are still developing their immune system, and so the body tries too hard to fight off the initial infection. Sepsis kills just over 5 million children worldwide every year.

4) In some countries, only 7% of the population know what sepsis is.

Even in the US and UK, this only goes up to about 50%, so more work is needed to raise awareness of this disease.

5) Sepsis is an acute, emergency condition.

If you suspect sepsis in someone, it is paramount that you get them to a hospital as soon as possible. Sepsis can attack the body and kill it within hours, and the chances of survival are reduced by 8% with each hour it remains untreated.

6) Sepsis is the end for the majority of infectious diseases and conditions.

Not being able to control an infection very often ends up as sepsis, so many conditions from a wound on the skin, to pneumonia, to dengue fever, can all turn septic if left untreated.

7) Treating the primary infection is the best way to treat sepsis.

If caught early enough, antibiotics given intravenously through a drip are effective in treating the initial infection, after which the body’s immune system stops attacking. Once this is done the resulting damage can be assessed, such as tissue loss and organ function.

This is because sepsis only occurs as a result of reacting to an infection in the body, so without the initial infection, nothing can happen. Vaccinations for certain infectious diseases, and good, clean hygiene practices are the best ways to avoid that infection occurring in the first place. This includes measures to ensure countries have access to clean water, clean apparatus and encouraging good personal hygiene both in institutions and at home.

9) Sepsis has lasting impacts if you survive.

Of the people who survive sepsis, very few of them make a full recovery straight away. Many lose fingers or limbs, as these are the first areas of tissue to be attacked. Some have problems with individual organs that have been attacked, and around 60% of patients will be readmitted into hospital within a month following a sepsis admission.

10) Sepsis is not infectious itself.

A lot of the time, particularly in developing countries, many people in one community can get sepsis. This gives the misconception that sepsis is contagious or infectious. This is not the case, however. The initial infection that led to the sepsis is the most likely culprit, and once you have the infection and don’t treat it, the risk of sepsis rises dramatically, leading to many cases in one community.

You can read more about sepsis and World Sepsis Day (WSD) on the website, as well as finding out what you can do in your area. Institutions worldwide will be holding awareness days, and you can take part in sponsored sports events, picnics and more. The best way to prevent sepsis is to promote good hygiene and vaccinations, and educate people on the dangers and symptoms to look out for with sepsis, so get spreading awareness!

Like what you see? Why not subscribe to the Isabel blog? We upload weekly, talking about all healthcare subjects from awareness to symptoms, to healthcare news.