World IBD day - What are Crohn's disease and ulcerative colitis?

World IBD Day falls on May 19th each year, and is a time for countries around the world to get together and raise awareness for Inflammatory Bowel Disease (IBD). This year, Australia used the hashtag #FlushTheStigma to help encourage conversation about conditions that in the past have been, and a lot of the time still are, associated with embarrassment or shame. America aimed to break down borders and make #IBDvisible as well, and the UK had a clever campaign entitled “It Takes Guts,” again talking about ending the stigma and opening up dialogue on IBD. We’ve written briefly about IBD in our blogpost “IBD vs IBS - what’s the difference?” where we gave an overview of the 2 main types of IBD, Crohn’s disease and ulcerative colitis. This week, we want to go more in depth and talk about these diseases, hopefully helping to end the stigma and show that IBD is a part of life for some and is nothing to be ashamed of.

IBD stands for Inflammatory Bowel Disease and refers to 2 similar diseases which affect the way we digest food. The 2 diseases are Crohn’s disease and ulcerative colitis, and both involve inflammation of some part of the gut. IBD can occur to anyone at any age, but most often occurs in adolescence and early adulthood, usually before 30 years of age. Despite a lot of research into the subject, we still don’t really know what causes IBD, but the leading thoughts are that it is connected to genes, an immune system reaction to certain bacterias, and a set of triggers linked to lifestyle.

The gut, the digestive system and the bowel

Contrary to popular belief the gut, medically termed the gastrointestinal (GI) tract, is not just the sausage-like tubes in our tummy. Those tubes, the small and large intestine, are known as the bowel, but the GI tract actually starts with the mouth, includes the oesophagus, the stomach, the small and large intestines, and ends with the anus. The gut/GI tract is also not to be confused with the digestive system, which in fact includes the GI tract, but also includes the liver, gallbladder and pancreas. Having said that, having IBD can cause complications with these other organs, as they may struggle to function normally without a healthy GI tract.

We hear the term a lot, but what does inflammation actually mean within the context of IBD? Inflammation, characterized by swelling, redness and soreness, is the immune system responding to perceived damage of tissue, in order for the tissue to be repaired. This works well for acute inflammation, for example when you cut your finger. Chronic inflammation, such as that in IBD, however, occurs when the immune system is triggered unnecessarily, and it goes on for a longer period of time as the body still thinks the tissue has not healed.

It is thought that Crohn’s disease affects around 115,000 people in the UK and up to 780,000 in US, so it’s not all that rare. What’s more, there may be many more people undiagnosed, either because the disease is in remission, or because they are embarrassed to go to the doctor about it. Crohn’s disease is chronic inflammation of any part of the GI tract. It most commonly affects the end part of the small intestine, termed the ileum, or the large intestine, called the colon. The inflammation can often be described as patchy, meaning there are portions of the GI tract that are inflamed, which can be extremely small or more extensive, and then there are healthy sections of the GI tract as well. Crohn’s disease can inflame just the surface of the GI tract lining, or it can also go much deeper into the walls of the intestines, causing further damage such as fistulas (see the symptoms section below).

Recorded cases of ulcerative colitis (UC) are marginally higher than Crohn’s disease, although this doesn’t necessarily mean it is more prevalent in reality, as ulcerative colitis is slightly easier to diagnose and therefore better documented. Around 146,000 people are estimated to have UC in the UK, and 907,000 people in the US. UC still involves inflammation but it only occurs in the large intestine, or colon. It is also an inflammation that’s in one big section or the whole colon, rather than in patches. Unlike Crohn’s disease, UC only usually inflames the surface of the lining, not the deeper walls, of the colon.

The symptoms of both forms of IBD are very similar, which is one of the reasons they are grouped together. The common symptoms are:

In addition to these symptoms, those with Crohn’s disease may experience: 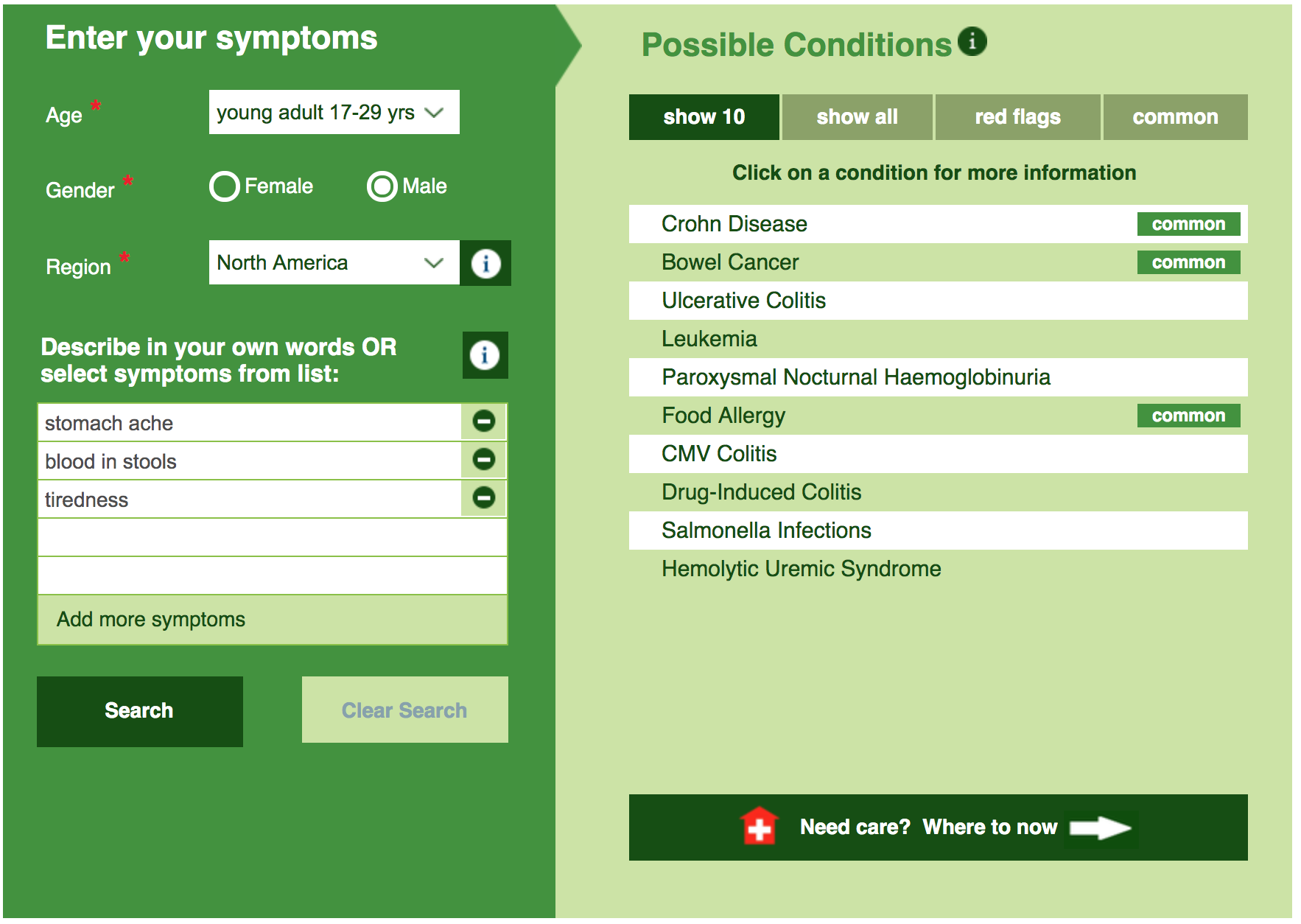 There aren’t really any medical cures for IBD. Sometimes surgery to remove affected parts of the GI tract can stop the disease. Treatments are mainly focused on helping ease symptoms and inflammation. These treatments include pain relief, anti-inflammatory drugs, diet changes and identifying triggers to avoid. People with IBD will most likely experience periods of remission where they have little to no symptoms, and flare-ups, where symptoms return and can make them very ill. If flare ups are common or last a long time, surgery can be performed, either to remove affected parts of the GI tract, or to widen areas or get rid of blockages. In periods of remission, however, life can continue mostly as normal for many people, with them taking special care to avoid known triggers and lead a healthy lifestyle. You can learn more about treatments, surgeries and living with IBD on the Crohn’s and Colitis UK website or the Crohn’s and Colitis Foundation website in the US.

If you're concerned about your symptoms, please don't keep them to yourself. Help end the stigma and visit your doctor. You can place your symptoms into the Isabel Symptom Checker to help you understand them, and discuss the results and options with your doctor.