The Relentless March of Computers - AlphaGo is World Champion 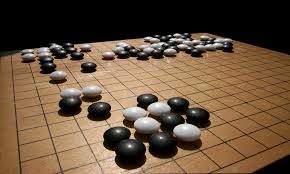 Today marks an historic moment in the development of artificial intelligence or AI; Google’s AIphago machine has beaten Lee Sedol, the World champion of Go.

Why, you may ask, is this relevant to differential diagnosis, symptom checkers or Isabel?

Well, one of reasons is that the ancient Chinese game of Go is way more complex than chess. For example, at the opening of chess there are just 20 possible moves whereas for Go there are 361.  But the key reason is that mastering the game means using intuition to react to the various twists or turns the game can take, which has many parallels in the healthcare world. Demis Hassabis of Google has called Go “the most profound game that mankind has ever devised,” describing it as “primarily about intuition and feel rather than brute calculation which is what makes it so hard for computers to play well.”

The Game of Go

At first glance, Go seems fairly simple. Every game features two players, one using black tiles and the other using white tiles. At the start of the game, the board is empty, and players take turns placing one stone at a time on the board, trying to gain territory by arranging stones in strategic shapes or patterns. Another key objective is getting control of their opponent’s stones by surrounding them on all sides.  Unlike chess, all the pieces are the same, and once played, cannot be moved around the board. This apparent simplicity is somewhat deceptive, as there are many ways players can deploy those pieces. Go has trillions of possible moves, and these almost endless possibilities make it difficult to craft in advance and follow a particular strategy. Mastering the game means using intuition to react to any number of possible twists or turns a game can take, depending on an opponent’s moves.

One of the criticisms of using computers in medicine is that medicine is often more art than science, and that people are all different and therefore computers cannot cope with the complexity of medicine. Isabel’s response to this that AI, especially with machines like AlphaGo, is taking huge leaps into the more complex world of intuition and adaptability, and that can only mean that at some point in the future, computer systems will be able to cope with the complexities of diagnosis and other medicine related issues. Back in the early days of Isabel we measured its accuracy by whether it got the final diagnosis in its list of 30 suggestions. Today our internal testing shows how far we’ve come. For example, with cases from Medscape, 80% of the time the final diagnosis is in the top 2 suggestions! That’s an awful lot more than 30 diagnoses.

Beating the world champion at Go today shows how computers will get better each day. Six months ago AlphaGo beat the European champion but Lee Sedol was still confident that he would win today, as apparently the computer then had made some mistakes that a stronger player like Lee Sedol would have exploited. He forgot that the computer can improve faster than a human! The computer has the ability to improve itself each day and learn, so, if it’s not quite there now, it probably soon will be. The second match between Alpha and Lee is on Thursday March 10, and you can watch a video commentary of the game of Go here.

Have you read our whitepaper on diagnosis decision making?