Brain fog, also known as mental fatigue, refers to transient periods of cognitive mental dysfunction that affects memory and concentration.  It can be a symptom of a medical condition and can also be related to lifestyle conditions including stress and diet.

Brain fog can make you feel as though your thought, understanding and memory processes are not functioning as they should and you may become forgetful or unable to store or recall information. Your ability to understand language, draw pictures or recognize shapes may deteriorate. Calculating sums, organizing and planning activities, and problem solving may all become more difficult when experiencing brain fog. Most people experiencing brain fog agree it makes them feel “heavy” and “disconnected,” and that there is a thought or action they must carry out but are not able to as they are confused or unable to concentrate. Brain fog encompasses a variety of components and you only need a few of these traits for brain fog to be present. Brain fog can come and go over a period of time and symptoms can last for weeks or months.

Stress has many negative effects on the human body including increasing blood pressure, causing immune dysfunction and causing mental fatigue by exhausting the brain. With mental fatigue it becomes harder to focus, reason and problem solve.  Try and reduce any stress you are experiencing. We’ve written about stress in more depth on another post.

Poor quality sleep will interfere with your ability to think and function leading to poor concentration and cloudy thoughts.  You should aim for eight hours of refreshing sleep per night.

Food allergies can enhance brain fog so if you have certain sensitivities then examine your diet. Food intolerances causing brain fog have been attributed to aspartame, dairy, peanuts and MSG. Try eliminating these foods if experiencing brain fog to see if it makes a difference. If you believe diet may be the cause of your brain fog, try keeping a food diary which documents what you are eating and what symptoms you experience and when, so you can see if there is a relationship with food as the cause.

If the symptom persists despite making some lifestyle changes then the cause may be due to a medical condition.  The Isabel Symptom Checker can help you research the symptom and discuss further with your Doctor. 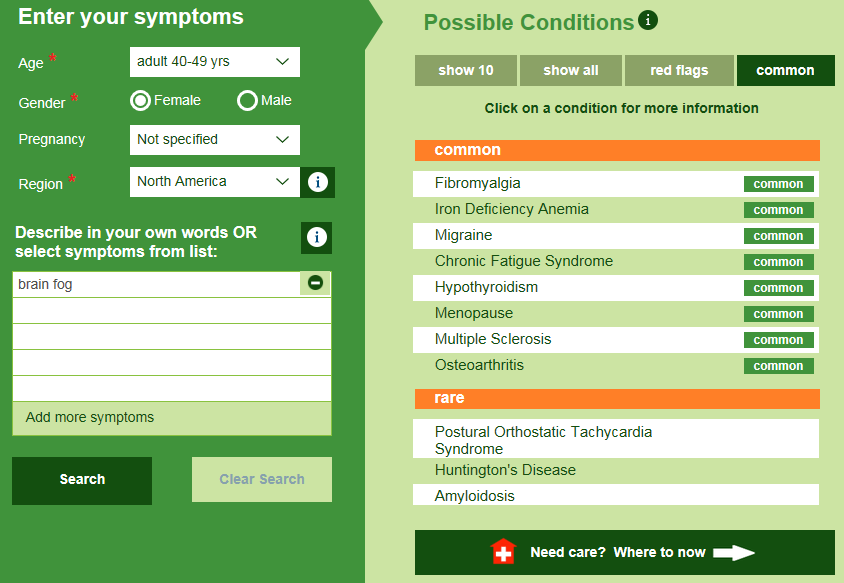 Common medical conditions with brain fog as a symptom include:

Brain fog, or ‘fibro fog’ when coupled with fibromyalgia, occurs in this disorder along with other symptoms including morning stiffness, tender points, fatigue and sleep problems.

This is the most common nutritional deficiency worldwide.  Low iron intake resulting from diet and accelerated iron loss, which occurs through bleeding or breastfeeding, are the main causes of iron deficiency.  The first symptoms of iron deficiency anemia tend to be neurological resulting in brain fog and fatigue.

People who suffer from migraines often develop brain fog before a migraine develops and this can be a warning sign. This can be a good indicator as they may take migraine pain relievers to prevent the migraine becoming as severe.

Chronic fatigue and brain fog are both prominent symptoms in CFS.  Both have a big impact on people’s quality of lives and brain fog has been stated by some who have CFS as the most disabling of their symptoms. We've written in more detail about CFS on a different blogpost.

There are many other medical disorders which could be a cause of brain fog including multiple sclerosis, hypothyroidism and depression.  Recognizing brain fog as a symptom yourself and seeking help from your doctor will allow you both to make informed decisions with any treatment, which is needed after identifying your diagnosis. Your Doctor will conduct a thorough physical examination and look at your medications, diet and mental health. Blood tests may also be conducted to check for any abnormal results which could help narrow down your diagnosis.

Brain fog and dementia – how to tell the difference

We recently blogged about types of dementia and a big concern in people who have brain fog is that they may be developing dementia, as both stem from cognitive dysfunction.  Brain fog tends to last a few weeks or months whereas dementia has a progressive cognitive decline that doesn’t get better.  The cognitive dysfunction in dementia is chronic and persistent, whereas with brain fog it is transient and once a cause has been identified then brain fog is curable. Recent research conducted looked for a link between people who have brain fog and fibromyalgia, assessing whether they are more likely to develop dementia in the form of Alzheimer’s disease later in life, but they found no evidence to support this.

If you are concerned about brain fog, or any symptoms you are experiencing, place them into the Isabel Symptom Checker and discuss the results with your doctor.