Could I have chronic fatigue syndrome (CFS) - or is it just Christmas?

It’s no secret that the holidays can often be associated more with exhaustion than enjoyment. Presents to buy and wrap, relatives to visit, food to cook….the list is never-ending, so no wonder many of us feel overly tired and lethargic well before the first present has been opened. We can easily blame flu-like symptoms, sore throats or even memory problems on the pre-Christmas build-up. But sometimes these symptoms have another more serious cause and are still lingering long after the decorations have been stored away.

Chronic Fatigue Syndrome (CFS), also known as Myalgic Encephalomyelitis (ME) is a long-term illness with a wide range of vague, non-specific symptoms, the most common being extreme tiredness. Though it tends to affect women between the ages of 25-45 most, it can affect anyone, children included. Over 1 million people have the condition in the US and around 20,000 in the UK. As fatigue is one of the most commonly reported complaints to doctors and can be a feature of so many different conditions, CFS often takes a long time to diagnose. Currently there are no specific diagnostic tests and for a doctor to even consider a diagnosis, most patients need to have experienced fatigue for at least 6 months. Sadly, many sufferers are diagnosed very late, or worse have to face accusations of laziness in the workplace. Usually, doctors can only diagnose CFS having excluded all other possible culprits.

Symptoms and diagnosis of CFS

Given the difficulties associated with diagnosing this complex illness, guidelines have been established by medical organizations to help rule out other conditions and hopefully arrive at a useful conclusion. The official guidelines from the UK National Institute of Clinical Excellence (NICE) say: “A diagnosis should be made after other possible diagnoses have been excluded and the symptoms have persisted for 4 months in an adult and 3 months in a child”. These symptoms are varied, but the most prominent one is the tiredness itself. This has to be defined as extreme, unexplained and persistent mental and physical tiredness that does not improve after rest or sleep and which has led to a significant reduction in your normal levels of activity. Sufferers often describe their fatigue as utterly overwhelming and not like a normal type of everyday tiredness. The symptoms often become worse after exercise though this effect is sometimes delayed by a few hours.

Usually at least one of the following symptoms would need to also be present for a diagnosis of CFS to be considered:

These symptoms can vary in severity from one patient to the next. While one sufferer can just about carry out everyday activities, albeit perhaps having to give up certain hobbies in order to rest, others may be housebound or possibly even bedbound and struggling even to do the most basic tasks such as brushing their teeth. 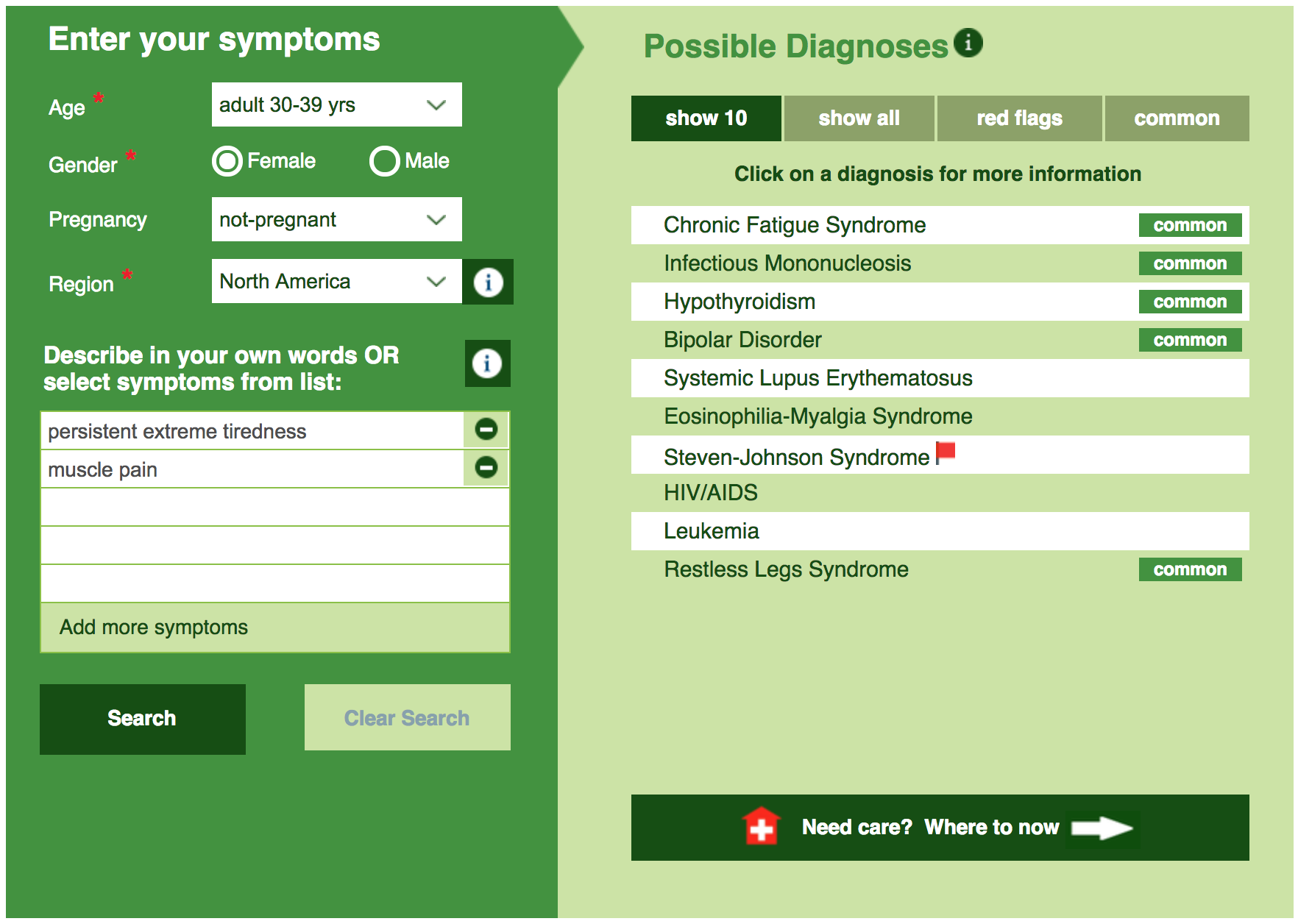 Having taken your medical history and assessed symptoms, you could be offered blood or urine tests to rule out other possible culprits such as anaemia, liver and kidney problems or an under-active thyroid. Other conditions to be considered, depending on your combination of symptoms, could include:

The cause is as yet unknown but studies have shown that CFS could be triggered by some of the following:

Sadly there is no known cure for CFS, though certain medications can be offered to help ease symptoms. These can include anti-depressants and painkillers. Your consultant should come up with a tailor-made treatment plan for you based on the severity of your symptoms. You may have to make a few lifestyle changes to manage your symptoms, such as building rest periods into your day, or cutting your studies or work down to a part-time basis. Some patients respond well to CBT (Cognitive Behavioural Therapy) which has been reported to help patients feel better about their diagnosis and feel more in control of their symptoms. You may also be offered advice on how to improve your diet or to avoid certain foods which bring on nausea. The good news is that most people’s symptoms improve with time. For some, the condition can disappear completely; others will find they might experience a relapse when their symptoms deteriorate for a period of time before improving again.

What is clear is that the earlier you can reach a diagnosis the better, as the lifestyle changes mentioned above should all contribute towards improving the symptoms you’re experiencing. Many sufferers spend years before they are given a correct diagnosis which can explain their frequently debilitating symptoms. This in itself can lead to problems with relationships or in the workplace – some sufferers describe how a lack of diagnosis can lead to a breakdown in self confidence, even questioning if they are imagining their symptoms.

By using the Isabel Symptom Checker, you can show the list of diagnoses to your doctor to help him/her concentrate on the most likely cause of your symptoms. And remember, if they’ve all disappeared by January, then perhaps it was just a case of Christmasitis after all!