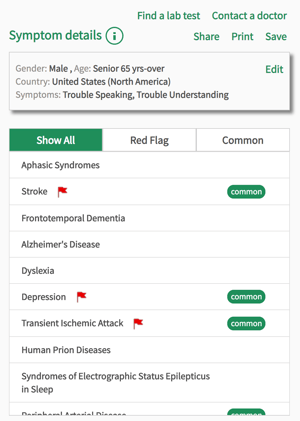 June is “Speak about Aphasia Month” in the UK. Aphasia is defined as a longterm communication disability, most often associated with other primary diseases such as strokes, and this year’s theme for aphasia month is the hashtag #recogniseaphasia. Organizations around the UK are raising awareness of the causes, symptoms and effects of aphasia on those who have this condition. Aphasia affects 350,000 people in the UK and 2 million in the US, so it’s certainly not rare. In this post we’ll go over the symptoms of aphasia, some of the treatments and therapies that are available, and the main causes as well.

Aphasia is considered a disability, involving someone who has difficulty with language and speech. This can include understanding language, speaking, reading and writing, and even problems understanding numbers. It is most commonly associated with stroke survivors, as damage to certain areas of the brain directly affect our language and speech skills. Aphasia is not to be confused with physical difficulties in speech and language, such as loss of muscle control, as aphasia refers to the cognitive functions only.

Aphasia is actually split into 2 main categories: expressive aphasia and receptive aphasia. As the names suggest, the former occurs when people have difficulty expressing themselves with language through speech and writing, whereas those with the latter may have difficulty understanding what they are hearing or reading. Many people have a combination of both types of aphasia, to different degrees. The symptoms for both types are:

As previously mentioned, aphasia is usually a secondary condition associated with a primary cause, and they are all associated with trauma or damage to the brain. Below are some common causes of aphasia.

Stroke is the main cause of aphasia, and around 1/3 of people who suffer a stroke will experience problems with their language and speech skills. A stroke occurs when blood is unable to reach a certain area of the brain, usually because of a blood clot stopping natural flow. There are quite a few areas of the brain that deal with processing, producing and understanding language, so the possibility for language to be affected is quite high compared with other areas of the brain. For more information on strokes, we’ve written a blogpost on how to spot them and what to do in this emergency situation.

Trauma in the medical world refers to sudden onset damage from an outside blunt object or severe impact, and is considered a medical emergency. Once initial life-threatening issues have been assessed and sorted where possible, longer term effects then start to be understood over the ensuing weeks and months. If there was any damage to the areas of the brain that deal with language and speech, then patients of TBI may experience aphasia. We’ve written about TBIs on this blog before as well.

Tumors in the brain, whether cancerous or not, can cause many issues to someone’s cognitive capacity as they impede on the space in the skull. These issues can include language if those areas of the brain are affected. In fact, aphasia can sometimes be an early symptom of brain tumors and is often the sign that leads to a diagnosis. If tumors are removed, aphasia may become apparent or continue to be apparent, and it may change slightly in its presentation. A lot of post-operative therapy from brain tumors is aimed at trying to regain speech and language skills. You can read more about brain tumors on our blog.

One of the most common signs and symptoms of dementia, particularly that of Alzheimer’s disease or vascular dementia, is difficulties with communicating words or phrases. Dementia is a progressive, neurological condition common in old age, during which the cells in the brain progressively decline and cognitive functions become harder. We have written about the two most common types of dementia before. There is also a rare type of dementia known as Primary Progressive Aphasia (PPA), and this condition is a primary condition where language is heavily affected, as speech and language skills progressively deteriorate.

Aphasia is a longterm condition and disability, but that doesn’t mean therapies and treatments can’t help improve language and speech skills. Speech and language therapy in this context is aimed at trying to not only improve skills as much as possible, but also help develop coping strategies and find alternative ways to communicate, such as large grids containing words and pictures. Aside from therapy, research is always being undertaken to explore new techniques to help with aphasia, as well as some medications that are thought to help the brain repair damaged neurotransmitters.