Medical Screening - No Substitute for an Informed Patient 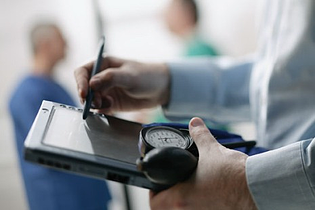 Two interesting stories appeared in the press recently covering very different approaches to medical diagnosis. The first is a targeted approach and relies on an informed patient while the second is very blunt and relies on medical screening.

The New York Times reported how an intelligent and motivated young patient in the US had correctly diagnosed himself with a brain tumour after getting access to his medical records.

After reading his records and research around the slight abnormality revealed in a brain scan several years earlier he was ready, when his sense of smell changed, to push his doctors into doing a MRI which revealed a tumour the size of a tennis ball.

However, he had to push and prod hard to get full access to his data and said he encountered a medical culture resistant to sharing data owing to tradition, business practices and legal concerns.

This is a great example of the targeted approach. Here we have an educated and, more importantly, motivated patient who had been sensitive to the development of an important symptom because he studied his medical record and acted on that knowledge in a timely way. This was the right thing for the patient and was also the right thing for the medical system as he was treated early rather than having to engage in a costly battle if the diagnosis had been later.

In contrast Pulse revealed that the NHS was going to widen the dementia medical screening programme and that GPs would be tasked with offering millions of patients over the age of 60 memory assessment tests.

At best, screening for almost anything is a scatter gun approach. It basically means that you subject otherwise healthy people with no symptoms to tests to see if they have the disease you are looking for. According to the OECD in 2010 6% of the EU population over 60 were suffering from dementia. However, the prevalence increases markedly with age so in the over 90’s it’s 31% of men and 47% of women but under the age of 65 those with dementia comprise less than 2% of the population and obviously even less than that at 60.

This means that you would have to screen, a hundred 60 year olds to a worrying test just to find one with dementia. Even with this one person there would be a good chance that the test was wrong (known as a false positive) or he/she would have been diagnosed anyway by an alert GP with good clinical skills.

Why the informed patient is more effective than medical screening

In my view this medical screening programme would be, at best, a waste of money and would not lead to any real improvement in the diagnosis and treatment of dementia. The New York Times story shows that an informed patient who is, by definition, an expert on their symptoms and provided with the appropriate tools such as their own medical record and a symptom checker, would be far more effective.

Rather than relying on often politically motivated medical screening programmes, Health Authorities could be focusing on making sure than one; their clinicians have good diagnosis decision making skills and use diagnosis decision support tools and two; patients are encouraged to become better informed and use tools like symptom checkers.

Watch Bob Smithing NP, FAANP talk about the benefits of the Isabel tool with his patients:

Download our whitepaper - Why and How to Improve Diagnosis Decision Making: