Iron deficiency anemia in infants and children - Signs and symptoms

Iron and its importance in children

Iron is an essential nutrient in a child’s diet, allowing for adequate growth and development.  Iron is essential to allow movement of oxygen from the lungs around the rest of body and helps muscles store and use oxygen.  There are many stages of iron deficiency  and symptoms can appear early on before the chronic stage of iron deficiency anemia is reached.  It is possible, if you recognize the symptoms, to treat iron deficiency before it reaches the anemic stage, where iron stores have been depleted.

Infants who are born prematurely (more than three weeks early) or have a low birth weight, are at risk of iron deficiency and a doctor may recommend iron supplements if this applies to your infant.  If your infant is breastfed they should have an adequate supply of iron from breastfeeding until they are at least 4 months of age. After this time, an iron supplement may be needed if the infant  is exclusively breastfed, until they start to take other foods in their diet. The American Academy of Pediatrics recommends infants are exclusively breastfed for the first six months.  It is not recommended that infants are given cow’s milk if they are under 1 year of age, as cow’s milk at an early age can decrease the amount of iron absorbed by the gut. If a baby is formula fed, choose a formula which is fortified with iron to prevent iron deficiency anemia.

Cow’s milk is low in iron and after 1 year of age you should ensure a child doesn’t drink more than two cups of cow’s milk a day.  If a child drinks too much cow’s milk then they can become full easily and not eat other foods to complement their diet, resulting in iron deficiency.  If a child has a balanced diet of other foods as well as fluids then they should receive enough iron from their diet.

A child with a diagnosed health condition which causes their diet to be restricted may become iron deficient. This can be due to the health condition itself or repeated infections, and so an iron supplement may be prescribed by their health provider.

If children are picky eaters or they are on a vegetarian diet then they may not obtain enough iron from their diet and become iron deficient. In the case of vegetarians, iron rich vegetables such as spinach can be a solution, as well as supplements.

Iron deficiency is noticeably seen in adolescents due to the periods of rapid growth that they undergo, and iron stores can become easily depleted. Girls are particularly affected during adolescence as their bodies are not able to store as much iron and they lose iron during menstruation. Adolescent boys can also be affected if their diet is poor and due to the rapid growth they undergo at puberty.

Symptoms of iron deficiency in children

A child who is not receiving enough iron from their diet or who has other complications from their health will become anemic if the iron deficiency is not recognized and corrected. When there isn’t enough iron in the body then fewer red blood cells are made and anemia results. What’s more, when iron stores are depleted, the body uses up the limited iron it has available to try and maintain the red blood cell count that keeps vital systems functioning in the body, but as a consequence other muscle and brain functions can be affected.

Look for these signs of iron deficiency symptoms in your child and use the Isabel Symptom Checker if you need to make sense of these symptoms: 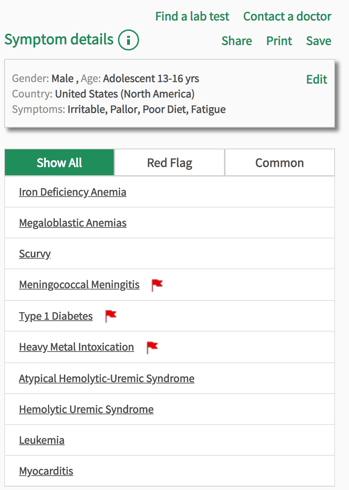 Symptoms of Iron Deficiency in Adolescents

It should also be noted that mild cases of iron deficiency may be asymptomatic, with no signs or symptoms present.  If you are concerned about iron deficiency then look for subtle signs and examine your child’s diet and intake.  Keeping a food diary may help you assess their diet.

Pica is an interesting symptom which may show in iron deficient children.  Children with low levels of iron may develop cravings for non-food items including ice, dirt, clay, paper, cardboard and cornstarch.  Pica can cause constipation and if your child develops a craving for these types of items then they should be reviewed for iron deficiency.

If you are concerned about your child's symptoms or suspect iron deficiency, place all the symptoms into the Isabel Symptom Checker and discuss the results, and possible treatments, with your doctor.