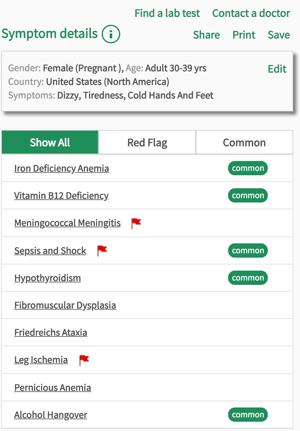 Answering yes to this question is much more likely than you’d think. The World Health Organisation estimates that more than 25% of the world’s population is affected by anemia, with half of these cases being due to low iron levels – that’s a staggering 2 billion people. If this is the case, why don’t we know more about the condition and why aren’t more people being treated for it? Part of the explanation lies in the fact the symptoms can be non-specific, they can easily be confused with other illnesses, and can come on very gradually. They can also disappear temporarily before returning, perhaps under a slightly different guise. Other sufferers may have visited their doctor complaining they just feel constantly under the weather, as tiredness and lethargy are the most common symptoms, and been told they just have a virus. Pregnant women and those who have recently given birth are most likely to be iron deficient, as are those who have heavy periods. But unfortunately it’s not always just a simple case of getting a blood test as, depending on the type of deficiency you have, your results could be misinterpreted leaving the patient once again with no explanation for their symptoms and putting them down to just ‘life’.

With millions of people worldwide struggling with often debilitating symptoms and no answers, we hope this blog will go some way to explaining the symptoms of iron deficiency anemia, in the hopes that more sufferers can research their symptoms and ask for the very simple cure; iron supplements. We will also be explaining how a patient can be iron deficient, but not necessarily have anemia.

What is iron deficiency anemia (IDA)?

The term anemia derives from the greek for ‘without blood’ and actually refers to several types of anemia, from aplastic anemia, which we wrote about a few weeks ago, to the more rare hemolytic anemia. However, it is iron-deficiency anemia that most people are referring to when they talk about anemia, as this is the most common form of the condition.

To properly understand IDA, we need to understand the functions of our blood. In our blood, we have 3 types of blood cells: white blood cells, red blood cells, and platelets. White blood cells play a large role in our immune system and keeping our bodies healthy, while platelets are responsible for clotting the blood and ensuring it is at the right consistency to travel efficiently around the body. Red blood cells account for around 40-50% of our blood, and they carry oxygen and carbon dioxide to and from the heart, which is arguably one of the most important functions of the human body.

It is possible to be iron deficient, but not be anemic. This happens when your haemoglobin levels are satisfactory but other markers such as your transferrin saturation, a protein that regulates the absorption of iron into the blood, are low. Unfortunately, many standard blood tests won’t test for additional markers such as transferrin so a patient with satisfactory haemoglobin levels could mistakenly be told they are not iron deficient when in fact they are. If you’ve been told you’re not anemic, it may be worthwhile asking for a more comprehensive blood test which includes ‘iron studies’ ie an examination of all aspects of your iron levels.

Causes of iron-deficiency anemia - who is at risk?

Pregnancy is the most common cause of iron-deficiency anemia, due to the body needing a lot more oxygen to be carried around the body during this time. This intensifies as the pregnancy progresses, and expectant mothers are carefully monitored to ensure their iron levels are healthy. Consuming iron-rich foods is important all the time, but even more so when pregnant.

Any significant loss of blood can result in anemia, and this can be caused by anything from heavy periods to internal bleeding, or excessive bleeding following a medical procedure. For this reason it’s important you visit a doctor when experiencing any of the symptoms outlined below, as there could be an underlying cause such as intestinal disorders or endometriosis, or it could just be that your body is struggling to recover from recent blood loss and needs a bit of a boost. 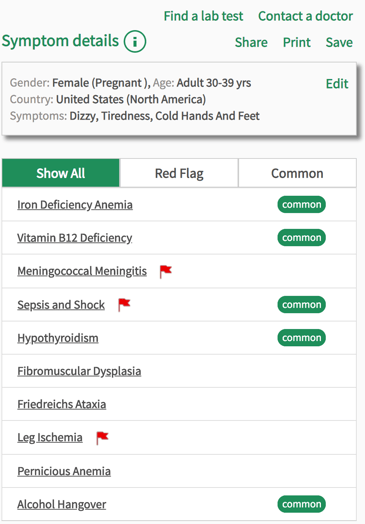 Because anemia affects the blood cells' abilities to carry oxygen to the heart, the body is lacking enough oxygen to function properly, which can cause a wide and quite diverse range of symptoms. The most common symptoms are:

However there are also other symptoms that can be caused by low iron levels:

Getting enough iron in your body is the only way to treat iron-deficiency anemia and iron deficiency, and this can be done in a few ways, depending on the severity of the condition. Blood tests are taken to determine the iron levels in the blood and overall blood count. You would also be tested at this point for other types of anemia. If the iron levels are not very far below average, you may be able to simply improve the iron levels in your diet, consuming iron-rich foods such as red meat or green vegetables. In some cases, iron supplements that are available over-the-counter are recommended and will be sufficient but make sure you take these with some vitamin C (such as a glass of orange juice) and at least 1 hour before taking tea or coffee as this inhibits absorption. If your blood tests reveal that the iron levels are considerably low, doctors can prescribe stronger iron supplements in varying doses. These can be taken for up to 6 months and do sometimes come with some unpleasant side effects such as stomach aches and other digestion issues. It’s important you keep taking the medication, however, as they will help the body to carry oxygen around the body, which is a much more important function. Iron infusions will sometimes be offered and these should provide a much more immediate improvement in symptoms.

If you are experiencing any of the symptoms outlined above and you’re concerned about them, place them into the Isabel Symptom Checker and discuss the results with your doctor. The symptoms in this blogpost are extremely common for many conditions, and so ruling out the options one by one is the most efficient way to arrive at the correct diagnosis.