What vaccines does my baby need? National Immunization Awareness Month 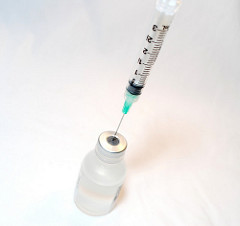 August is National Immunization Awareness Month in the USA, meaning healthcare organizations come together to both promote the use of immunizations, and make sure that everyone is aware of the vaccinations they need at the different points in their life.

Babies need a lot of vaccines, often having the same vaccine multiple times over the first months of their life. It can be confusing and overwhelming when researching which immunizations your child will be receiving at their appointments. We have put together all the recommended vaccinations for babies and children in the US, with brief descriptions, so you can rest assured that your child has had all the immunizations needed and that you understand their purpose.

This is the first immunization your baby will receive, at birth, and it is to protect against hepatitis B, a viral infection of the liver passed on through the blood. It is the first installment of a three part vaccination, which will be completed by the time your baby is 18 months. The second one is given at 1-2 months, and the third at any point after 6 months, through to 18 months. If you are in the UK, the HepB vaccination is currently only given once at birth.

This immunization protects against rotavirus, which is a virus causing issues with the bowel. It is the leading cause of diarrhea in infants, and in underdeveloped countries can cause death from dehydration. A baby will receive three RV vaccinations, given orally, at 2,4 and 6 months.

DTaP is a four part immunization given at 2,4 and 6 months, with a further shot at 15-18 months, and it protects against diphtheria, tetanus, and pertussis. All are life-threatening diseases which often affect babies and young children if not vaccinated against. Diphtheria is a bacterial infection of the nose and throat that can cause breathing problems, swollen glands and even death if the heart experiences abnormal rhythms. Tetanus affects the muscles and nerves causing muscle spasms and difficulty moving the jaw or breathing. Pertussis is better known as whooping cough and if not treated can cause complications such as pneumonia and other life threatening infections.

This vaccination protects against Haemophilus influenzae type b, a complex strand of bacteria that can cause many different infections in infants and children. They range from a simple ear infection to the more serious blood infections which can then further develop into meningitis. A baby will receive four Hib shots at 2,4 and 6 months, then finally between 12-15 months.

PCV stands for Pneumococcal Conjugate Vaccine, and it covers a baby from a range of diseases, all caused by the bacteria streptococcus pneumoniae. These include diseases such as pneumonia, meningitis and septicemia. You will receive the PCV vaccine at the same times as the Hib vaccine, so at 2,4 and 6 months, then one last shot between 12-15 months.

The IPV vaccine protects against polio, a life threatening viral infection of the nervous system causing paralysis and sometimes death. Only 70 years ago when the vaccine was first introduced, Polio was an extremely common disease worldwide, and today it is nearly entirely wiped out. Babies and children receive the IPV vaccination in four parts, once at 2 and 4 months, another between 6 and 18 months, and a final booster shot at 4-6 years.

The MMR vaccination is for Measles, Mumps and Rubella. Measles is a viral repiratory infection causing flu-like symptoms, Mumps is a highly contagious virus that affects the salivary glands and causes them to swell, and Rubella, also known as German Measles, has similar but less severe symptoms of Measles, but can be very dangerous for unborn babies if mothers contract the disease whilst pregnant. The MMR vaccination has to be given in two instalments, and if one is missed you are not fully protected. The first is given at 1 year old, and the second at 4-6 years. However, if you have missed one or both of these jabs, they can be given at any time in your life, in order to protect you. There has recently been an outbreak of Measles across America, so it is important that everyone is up to date with their MMR vaccinations.

The Varicella-Zoster-Virus is the virus commonly known as chicken-pox, and this vaccination is used to prevent this. In the US, vaccinations for chickenpox are commonplace, but it is not so common in the UK, where it is not offered on the NHS. This is because in children the condition is mild, and also helps protect adults from more severe cases of chickenpox, and shingles. However, in the US children will receive the varicella vaccination twice, once at 12-15 months, and again at 4-6 years.

Protecting against hepatitis A, this is a similar viral infection of the liver to hepatitis B, but is passed on through the feces instead of the blood. It has similar symptoms such as jaundice, fever and fatigue, and it is important that children and adults have received both installments of this vaccination. The first is given at 12-23 months, and the second should be given 18 months after the first. In the UK this vaccine is currently not given as the risk of infection is considerably low.

These are the main vaccines that all babies and children are recommended to have in the US, and if you are still confused about the timings of these immunizations, the Center for Disease Control (CDC) have put together a handy immunization chart for when each of these are recommended to be given. Additionally, if you are concerned about any symptoms your child is experiencing, and about the vaccinations you may not have had yet, you can place the symptoms into the Isabel Symptom Checker and discuss the findings with your doctor.