What is Sarcoma? | Sarcoma Awareness Month 2017 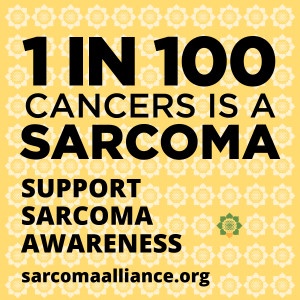 July is Sarcoma Awareness Month globally, and this week the UK are celebrating National Sarcoma Awareness Week as well. We’ve written blogposts on many different cancers over the years, including an overview of the types of cancer, but we have never gone in depth on this rare form of the disease. Sarcomas are often coined the “forgotten cancer” because they are both rare and under-diagnosed. Sarcoma awareness month is all about educating doctors and patients alike on the symptoms and diagnosis of sarcoma, in the hope that more cases will get spotted sooner, because, as is the case with most cancers, treatment is vastly more successful the earlier it is diagnosed.

When a malignant tumour grows in the connective tissues of the body, it is called a sarcoma. Sarcomas are further split into two main groups, bone sarcomas and soft tissue sarcomas.

Soft tissue sarcomas affect just over 11,000 people in the US per year, which is very rare. Soft tissue includes tendons, cartilage, tissue, muscles, fat and even blood vessels, and a sarcoma occurs when the cells in these tissues mutate and become tumours. 40% of soft tissue sarcomas occur in the legs, and 30% in the chest or abdomen. However, they can happen anywhere on the body as soft tissue is the connective element to our entire body.

Any cancer in the bone or bone marrow falls under the bone sarcoma category. This is one of the most rare forms of cancer, with under 3000 people in the US being diagnosed each year. Bone cancers are more common, although still extremely rare, in children, as their bones are still growing and more vulnerable to cell mutations.

The symptoms of sarcoma are very hard to spot, especially early on, and by the time symptoms do start to emerge, sometimes the cancer can be quite progressed. However, there are some symptoms to look out for. In soft tissue sarcomas, a painless lump is usually the first symptom to present, and as this progresses and starts to press on the ligaments, muscles and nerves in the surrounding area, there can be pain. However, because soft tissue is so malleable, often a lump can get quite large before it is noticed by anyone. Bone cancers tend to be painful much earlier on, because our bones are extremely sensitive. As bone cancer is most common in children, take note if a child is complaining of pain in their joints or aching bones. A bone sarcoma in children can often be mistook for growing pains, meaning when finally spotted it is already progressed and treatment odds are worse.

These symptoms are hard to spot, if visible at all, and this can be disheartening. The message that Sarcoma Awareness Month is trying to get across is that a general awareness of your whole body can help in diagnosing not only sarcoma, but all cancers and indeed many other illnesses. If you are checking your breasts and skin as we have been told to do by various cancer campaigns, then that is great, but a whole body awareness and examination is the best way to spot things as early as possible. If we know what normal is, we can know what abnormal is, and checking your body for anything out of the ordinary, be that a new mole or a lump in your leg, could save time and help make treatment more successful.

The best way to diagnose any cancer is through a biopsy of the tumour, to discover if it is malignant or benign. For soft tissue cancers that present somewhere visible, this can be quite simple, but soft tissue runs throughout our body, meaning often the tumour is not within easy reach. Bone sarcomas are the hardest to diagnose, as a long needle into the bone, or even an incision, is often needed to get a biopsy. X-rays and scans can show sarcomas, particularly in the bone, and this can help with location of the tumours. However, in some cases the process of determining whether a sarcoma is malignant or not can be just as invasive as removing it altogether, and in this instance the tumour is simply removed and tested afterwards to see if further treatment such as chemotherapy will be needed. We are all too familiar with the treatment of cancer, and sarcomas are not that different. One of, or a combination of, surgery to remove the tumour, and radiation or chemotherapy to help stop the spread and kill off the cancer, are the usual path for sarcomas. If diagnosed early, removing the tumour is often successful and the cancer is gone. However, a lot of sarcomas are diagnosed quite late when the cancer is already at stage III or IV, meaning treatment can be less effective.

What can I do this Sarcoma Awareness Week? 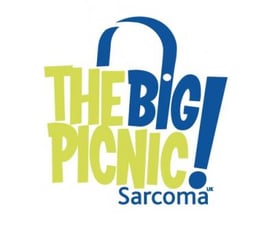 First of all, telling everyone about the “forgotten cancer” will help spread awareness of this rare disease, and this can help with both diagnosing sarcomas early, and also encouraging new research and treatment options. In the UK, for Sarcoma Awareness Week, you can take part in the Big Picnic nationwide, where local communities are holding fundraising picnics. You can even get a Big Picnic Pack with balloons, banners and a picnic blanket. If you can’t hold a picnic or there isn’t one happening near you, you can still get involved with Sarcoma Awareness Week by ordering an On the Ball Pack. This pack, which you are supposed to share with your doctor, contains a key ring with the words “is it sarcoma?” written on a golf ball as a visual reminder to consider the rare disease. It also comes with an information pack on the red flag symptoms and options for referral and treatment. At Isabel we are all about not missing rare diseases and spotting symptoms that could be missed, so this is a great idea to take your health both into your own hands, and also to encourage your local doctor’s surgery to spot the unexpected.