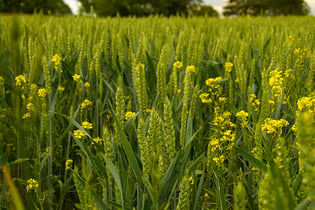 Hay fever season is upon us, and if you suffer from this seasonal allergy, soon, if you’re not already, you’ll be sneezing every minute and wanting to itch your eyes every second. Sales of antihistamine and nasal spray will soar and we’ll all be annoyed at ourselves for wanting spring to arrive. Think you know everything there is to know about hay fever? We’ve put together 10 facts about hay fever, some of which might surprise you.

1. There are different types of hay fever

We use the term hay fever to refer to any allergy towards pollen. However, different types of pollen affect different people, and at different times of the year. The three main types are:

Tree pollen tends to kick off the season in early to late spring, with grass pollen affecting those who suffer in the height of summer, and weed pollen carrying on into early autumn in some areas.

That’s 60 million people in the US, and about 16 million in the UK. That’s a lot of sneezing.

3. Symptoms can start at any time

Symptoms of hay fever are most commonly developed in childhood and adolescence, and they tend to lessen in severity with age. However, contrary to popular belief, hay fever can strike at any age, in anyone. There is a lot of conflicting research and theories on the reasons for adults developing hay fever. The most common of these theories is that the allergy is always apparent in the sufferer throughout childhood, but something sets it off in later life.

4. It runs in the family

If parents suffer from allergies in general, their children are more likely to suffer from hay fever and other allergies.

5. It depends what country you’re in

In the UK, grass pollen is the hardest hitting type, with 95% of hay fever sufferers having allergic reactions to grass pollen. However, climates in most of the United States mean grass pollen is considerably lower, and it is the tree pollen, particularly ash, cedar and oak trees, that affect people the most.

6. You can start your hay fever medication early

Research has shown that starting your antihistamine medication early can actually lessen the symptoms of hay fever when they eventually hit. This pre-emptive method of fighting off the allergies can help you feel better, and even come off the medication sooner, than if you start when symptoms begin to show.

7. There are pollen forecasts

Weather forecasts often include a pollen count in their morning broadcast during peak season, and it is always available somewhere online. If you live in the UK, the MET office release a pollen count daily and in the US there is a handy map based tool for finding your local area’s pollen count.

Get in the habit of checking it daily so you can start your day armed with all the nasal spray you might need.

Atopy is a term to describe the genetic tendency to develop allergies. These three allergies are all under the umbrella of atopy, so if you have hay fever, you’re more likely to get eczema or asthma and vice versa.

9. It’s probably not the flowers

Pollen allergies are from airborne pollen particles, which have already blown away from the plant responsible. However, the pollen in a lot of flowers is coated and sticky, so the likelihood of it becoming airborne is a lot less. That’s why grass and trees are the more likely culprits.

The symptoms themselves do not come from the pollen, they come from you. Histamine is a chemical reaction produced by the body when it mistakenly thinks the immune system is under threat. When pollen enters the body of an allergy sufferer, it triggers the production of histamine, which then creates an inflammation of the nose and throat, along with all other symptoms.

So stock up on the antihistamine medication now and get to grips with the type of pollen you’re allergic to, check the pollen count every morning, and you might stand a chance this hay fever season.

Unsure about your hay fever symptoms? Run them through the Isabel Symptom Checker: