In the space of just two weeks, a paper has appeared and a new UK government task force has been launched which both point to the important role that will be played by the symptom checker in the brave new healthcare world where the patient starts to take greater control.

The paper was of an interesting study which showed that GPs' diagnostic accuracy improved when they were shown a differential diagnosis based on the patient's problem and before they had done any of their own thinking. This made them think more openly and be receptive to a wider range of diagnostic ideas than if they were shown the same list after they had done their own thinking.

This is not surprising and backs up the idea of Daniel Boorstein, Librarian for the US Congress from 1975 to 1987 that “The greatest obstacle to knowledge is not ignorance, it is the illusion of knowledge.” In other words, once the GPs had done their thinking and decided what they thought the diagnosis was then they were less receptive to new knowledge as they already thought they were right.

On Sunday, NHS England announced “a new independent taskforce to develop a five-year action plan for cancer services that will improve survival rates and save thousands of lives.”

“The launch of a major early-diagnosis programme, working jointly with Cancer Research UK and Macmillan Cancer Support, testing seven new approaches to identifying cancer more quickly. The aim is to evaluate a number of initiatives across more than 60 sites around the country to collect evidence on approaches that could be implemented from 2016/17.Initiatives will include: offering patients the option to self-refer for diagnostic tests; lowering referral thresholds for GPs; and multi-disciplinary diagnostic centres where patients can have several tests in the same place on the same day.”

The most interesting aspect of this will be giving patients the opportunity to self refer.

Readers should now see that these two events both mean that patients will need to be better informed and start to take charge of their own health. If GPs’ diagnostic skills are better when given a differential diagnosis before they start their own thinking then who better to provide this than the patient?

How will patients do this? By using the Isabel symptom checker which will enable them to think carefully about which symptoms are most important and how they have developed and then reading up on possible diagnoses. The new 'where now' function will even help them decide where to seek medical care.

Doing this work will also help the patient decide whether they need to refer themselves and to whom or whether to monitor themselves carefully. 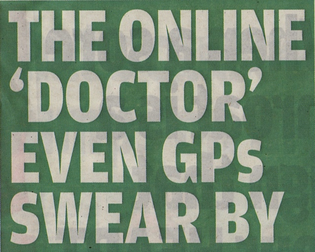