Tomorrow marks the end of 2015, and as everyone around the world reflects on the triumphs of the year, the times shared with family and friends, and some of the things we’ve learnt from in the past 12 months, we thought we would take a look back at some of the amazing medical occurrences of 2015. It’s been a great year for medicine in many ways, with a lot of small breakthroughs in beating the disease giants like Ebola and Cancer, and we’ve also witnessed many pioneering procedures to save those who in previous years may not have made a full or partial recovery. As Isabel was inspired by Isabel Maude at age 3, and began as a pediatric tool, we’ve decided to focus on three amazing stories of the pediatric work of surgeons, doctors and scientists in the last year. 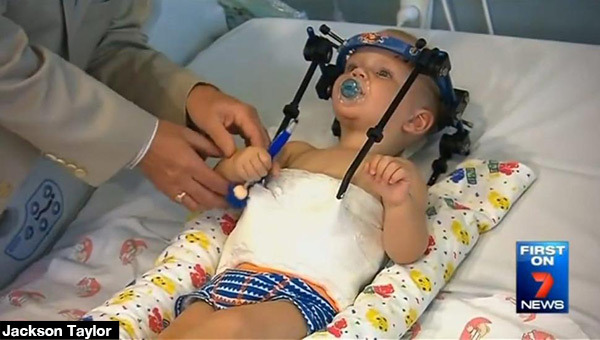 Jackson Tyler was the 16 month old son of Rylea Taylor. On September 15th of this year their car, travelling at approx. 110kmph/68mph was involved in a head on collision with a car full of teenagers. Jackson’s sister suffered serious injuries but was not critical, whilst Jackson himself was clearly in a worse state. He had broken his neck, in what is known as an internal decapitation - where the skull becomes completely detached from the spine inside the body. It is rare for anyone to fully recover from an injury like this, and the chances of survival for someone Jackson’s age are extremely slim. However, Dr Geoff Askin in Melbourne lead a 6 hour operation to reattach and pin in place Jackson’s skull and spine, and it was a great success.

His story was a heartwarming one, but also prompted discussions on car safety, especially children in cars, highlighting an argument for keeping children in rear-facing car-seats for as long as possible. Jackson was most likely in a forward facing car seat at 16 months, and the stress of a child’s head, which is 25% of their body weight, compared to 6% in an adult, during a collision, pulls the skull away from the spine. Babies’ and children's’ spines are underdeveloped and actually split into 3 separate parts for the first year or so, and these elements will have had a huge impact on little Jackson in the crash. The irony of it is that Jackson’s age could have been the very reason this operation was so successful, as his young and developing body reacted brilliantly to the surgery and he is now on the mend.

Zion Harvey lost his hands and feet at a young age, following a life-threatening sepsis infection. Following this, at 4 he needed a kidney transplant, which was donated by his mother, Pattie Ray. If all this wasn’t enough for one small and endearing boy, he then prepared himself for an operation never done on a child before; Zion Harvey became the first child to have a bilateral hand transplant. This means he had both hands from a donor attached to his body, in a 40 person strong 11 hour operation. It was the previous kidney transplant that made Zion a good candidate to pioneer this surgery, as he was already on anti-rejection drugs and his body was likely to accept the new hands. As you can watch in the video above, Zion’s optimistic take on the world captured the hearts of everyone and the operation was a brilliant success. He will now go through months of hand therapy, as well as having continue the anti-rejection medication he was already taking for his kidney transplant. He maybe even get the puppy he was hoping for!

Layla Richards was just 14 weeks old when her parents were told she had an aggressive form of Leukemia. She was put on chemotherapy and received a bone marrow transplant, but unfortunately did not respond well to either. The doctors at Great Ormond Street Hospital (GOSH) took the step to offer palliative care, but Lisa and Ashleigh Richards wanted to try something else. They told the doctors to try anything on her, “even if it hadn’t been tried before.” Professor Waseem Qasim is a Professor of cell and Gene Therapy at the UCL Institute of Child’s Health (ICH) and Consultant Immunologist at GOSH, and had been developing a new treatment involving targeting cells immune to the disease to kill cancerous cells. With a healthy stock of what they call the UCART19 cells, Layla Richards seemed like the perfect candidate to trial the new treatment. She received just 1ml of the UCART19 cells, and following a few weeks in isolation while her immunity recovered, and a further bone marrow transplant, Layla was able to return home. It’s amazing that a cancer so aggresive as Layla’s was responded to this new treatment, and it’s thought that after more testing and research, this could be a step in the right direction for the treatment of cancers like Leukemia.

This is just a small sample of the amazing medical work of 2015, even just in the pediatric sector. Here’s to hoping that 2016 holds many more medical breakthroughs for people of all ages across the world.