One of the most tragic cases of diagnosis I have ever seen was widely reported in the UK last week. This article in the Daily Mail is the most detailed as the reporter had clearly read the judgement that was also published. In brief, the case deals with a young couple whose child died after presenting with seizures due to a fractured skull. The clinicians presumed the fractured skull to be as a result of child abuse and the parents were charged with murder. Both parents were wrongly imprisoned for some months but were finally cleared of murder after it was revealed that the child had rickets due to vitamin D deficiency and that the fracture was most likely due to the child banging its head while in its cot. The couple also had a second child that was born before they were cleared at trial, and she was immediately removed from them. Although acquitted of murder at the trial, the parents had to go through another court case to regain custody of their daughter. They finally won this case last week and are now back at home with their daughter! 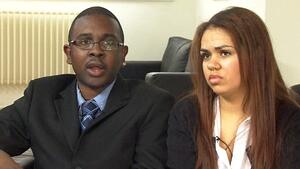 The case is particularly tragic because the missed diagnosis of rickets may have been prevented, and it shows that this wrong initial step can lead to a cascade of awful events. The case is also a classic one of "premature closure" as the clinicians jumped to the conclusion of child abuse and then failed to consider any other reasonable possibilities. The judgement is extremely detailed and includes statements from several expert witnesses so enables us to see that there was virtually no discussion or consideration of any other possible diagnoses. The judgement also shows that the young couple appeared to be perfect parents with Jayden not showing any signs whatsoever of abuse.

Just by entering any one or a combination of Jayden’s symptoms: “seizures”,  “fractured skull” or “low calcium” into Isabel (or the new iPhone app) may have reminded doctors to consider rickets as another important possible diagnosis. Instead, the diagnosis of “child abuse” was made to the exclusion of other likely and important diagnoses, triggering the cascade of horrific events to hit the family over the last three years. This case illustrates graphically why the use of tools like Isabel should become standard practice.

In the 21st century, when virtually every other industry is heavily reliant on information technology, our health should not be so dependent on a doctor’s memory and subjective views. In my view, hospitals and practices should be required to provide diagnosis checklist tools to support their clinicians in the same way that other tools are provided.