The Rory Staunton case highlighted in the news has shown how important it is to promptly evaluate and work up a patient for insidious symptoms which commonly occur across conditions -- and keep an open mind during diagnosis, avoiding premature closure.  The 12 year old suffered a minor cut to his arm while playing basketball. Within 24 hours, he was developing symptoms of vomiting, fever and leg pain, was seen by various medical professionals from his pediatrician to the hospital’s ER department over the next 48 hours, and then was treated for viral gastroenteritis and dehydration, and sent home when his vitals returned to normal.  The symptoms were broad and quite common in a variety of medical conditions, but a broad differential should have been worked through by the medical staff treating Rory until they had ruled out conditions and arrived at a correct final diagnosis.

Timely blood test results are critical: On his visit to the ER, blood tests were conducted and the results were available within 3 hours of the blood being taken, but they weren’t relayed within the hospital or more importantly to the patient and his family who were now at home after being discharged from the ER.  Rory’s blood work showed that he had high levels of neutrophils and bands associated with serious bacterial infection which were five times higher than would normally be expected and should have been commenced on IV antibiotics.  The hospital has now changed its policy to ensure that all patients are reviewed with their vital signs and any blood work ordered before they are discharged from hospital and if a patient is discharged then they will ensure the information is shared with the referring physician and also the family.  Rory died three days after he cut his arm from Streptococcal toxic shock syndrome after he gradually developed overwhelming sepsis and went into multi-organ failure.

Toxic shock syndrome (TSS) is a bacterial infection caused by Streptococcus pyogenes or Staphylococcus aureus.  The presenting signs and symptoms can be very nonspecific, but toxicity develops early resulting in a serious life-threatening disease caused my multiorgan failure.  Therefore early diagnosis and treatment is paramount to a good outcome.  Streptococcal toxic shock syndrome tends to develop from an infected cutaneous site and surgical debridement may be needed for deep infections.  Staphylococcal TSS is better known as being associated with extended tampon use or due to postpartum infections although other sites of infection with the staphylococcus organism can occur. Other symptoms which can occur include:

Blood tests should be taken and results may indicate:

Treatment of TSS involves fluid resuscitation and antibiotic therapy tailored according to what type of organism is found.   Surgical debridement may be necessary for deep tissue infections.

Early Diagnosis is Essential: As can be seen in Rory’s case, early diagnosis of TSS is essential, as serious life-threatening infections can develop within 24 to 72 hours. Initial signs and symptoms are usually nonspecific: for example, pain, fever, malaise, and muscle aches. The clinical course of TSS is often insidious, and requires a high index of suspicion, prompt diagnosis, and early treatment in an ICU.  Rory’s doctors should have kept an open mind in regards to his presenting complaints and worked up a strong differential of possible causes behind his presentation which could have been narrowed down until the causative diagnosis was discovered.  Using a clinical decision support tool like Isabel may have enabled them to generate this differential list quickly and remind them of the possibility that Toxic shock syndrome could have been the cause.  As it’s a rapidly developing illness, we will never know if Rory may have been saved had he been commenced on antibiotics on his initial presentation but at least all would have been done that was possible. 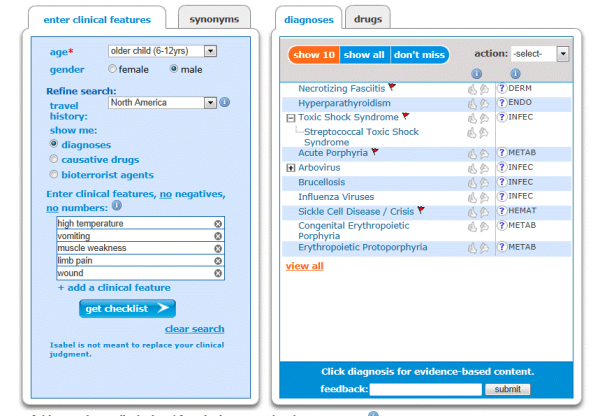 Isabel Healthcare staff and the Maude family express our deep sympathy for the Staunton family.