Isabel Could Have Improved the Differential Diagnosis in These Cases

“Old GP” is an actual GP based in North America who is close to retirement. He has a keen interest in strange presentations of diagnoses and a wealth of experience. He has been using Isabel over the last few months and has gone back over some memorable old cases to see whether and how Isabel could have helped. We thought that his experiences would be of great use and interest to other clinicians, not only to hear about these cases but also how Isabel could have helped in building the differential diagnosis. “Old GP” wishes to remain anonymous out of respect for the privacy of patients and colleagues.

Some pre-Isabel diagnostic failures of the past . . .We missed them – Isabel would have got them first time. It may be tedious and unproductive to put every case through a computer program, but at the end of a busy day there are always a couple of uncertain cases worth computing.

A 3-year old boy, presented increasingly weak and listless over the past two days, has  rapid pulse and breathing, and warm dry skin. He had no neck stiffness,rash, his chest was clear, belly soft and a dry diaper.

Our immediate thoughts was a viral infection and obviously in need of hospital support. The Pediatrician did a spinal tap in the emergency department. The laboratory technician had the thoughtfulness to check the spinal fluid for glucose as well as everything else. Strongly positive! The child had Type 1 Diabetes Mellitus, was given Insulin and all was fine.

The parents thanked us from the bottom of their hearts for our speed of action and investigative thoroughness. We didn't feel so clever ourselves. What a complicated way to reach a simple diagnosis. Turned out the mother had put on a new diaper just before coming to our clinic – she hadn't wanted to offend us with a wet one. (Since then we've always asked parents to bring in a used diaper. Even then it's not always easy to squeeze a few drops from the new super-absorbent brands. And then we had to fire a college-trained secretary who said that dipping urine wasn't in her job description. After that we hired pizza-waitresses – they're perfect for medical clinics, good memories, don't mind dirty work, good at handling drunks and delighted to get clinic rates of pay.)

How did Isabel do in the retrospective trial?  A checklist of tachypnea, tachycardia, dry skin and lassitude put Diabetic Ketoacidosis top of the search list.

An Irishwoman in her 30s staggered into an emergency department, confused, irritable and smelling strongly of beer. The Emergency Medical Officer (not me, I'm glad to say), took offence at a visit by an apparent drunk, and ordered her to leave. In the small hours of the next day she had a seizure and her friends took her to a different hospital. Again, a diagnosis by spinal tap – Meningeal Tuberculosis.

Could Isabel have expedited matters? Yes. A checklist of two features only, confusion and irritable, gave a search-list of possibilities including Meningeal Tuberculosis .

The key word here is possibilities to help build a good differential diagnosis. Medical and Nursing training give us a good sense of the probabilities, but we humans are not so good with the possibilities, and that's where a computer search can help so well.

An 80-year old man, a widower, living alone, was on our regular visiting-list. (My father used to say that he'd rather see ten old people in the daytime – even if only one of them showed any hint of decompensation – than be called out at 3 a.m. to deal with a single paroxysmal nocturnal dyspnea.)

This old gentleman, though never acutely ill, did seem to be going gradually downhill. His house became messier, he complained that his dentures hurt, and we saw petechiae on his forearms.  His diet appeared good – there was always a bowl of fresh fruit on his living-room table. It took referral to an internist to reveal that he had scurvy.

How would Isabel have done, if we'd had her back then? A checklist of lassitude, gingivitis and petechiae gives Vitamin C Deficiency top of the list. But what about the fruit bowl? “Well, doctor, I never liked fruits. I just keep them as treats for my grandchildren when they visit.” 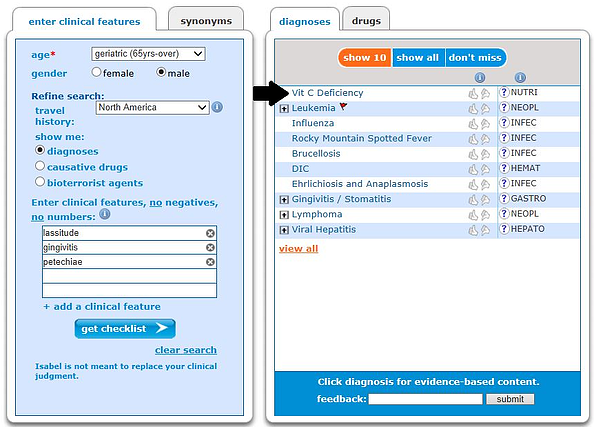 A LOL in NAD (Little Old Lady in No Apparent Distress) came to our general practice office on a rather busy day with the complaint of frequent falls. She needed a complete examination, but I was daunted by her many layers of clothing (it was winter-time). Undressing and dressing again, even with the help of our excellent assistant, would have delayed the day's appointment sequence to a crawl.

“I notice, Ma'am, that your house is on the road between my home and our clinic. Would it be possible for me to drop by tomorrow morning, say half-past-seven? Perhaps you could stay in your nightgown, so I could check out your heart more easily?”

She agreed, said she'd leave the door unlocked. Next day I entered the house and called her name.

She called back “I'm still in my bedroom, doctor , come right on up.”

So up I went, and damn near broke my neck.

Though Isabel has a checklist for falls frequently, her list of diagnostic possibilities does not, as yet, include Loose Stair Carpet!