Differential Diagnosis - Who uses Isabel and When? Ambulatory setting

As Isabel is sometimes regarded as ‘disruptive’, we thought that an overview of “who” uses Isabel and “when” would be helpful to both current  and future Isabel users to understand how it can often make a major significant impact in patient outcomes with no negative impact on workflows.  This is the first in a series of three blog posts.  Below is a synopsis of “who” uses Isabel followed by instances of “when” they use it. We thought the best way to illustrate this would be to provide some actual cases.  The series will look at the ambulatory, emergency and inpatient settings.  Today’s blog post will cover some cases that came from the ambulatory setting and how diagnostic decision support (DDS) helped them.

Isabel is currently mainly used by:

When do clinicians use Isabel?

Presentation: 18 year old male from Michigan with a 4 year history of:

Story : The symptoms began when the patient was 14 years old.  At that time, a diagnosis of Ankylosing Spondylitis was made with a referral to a Rheumatologist.  The patient was treated for four years with minimal response.  Treatment included expensive drugs, (Humera) and physical therapy costing over $25,000/year.  The patient returned to his primary care provider who at this point had begun using Isabel and decided to run the case through the diagnostic decision support tool.

How Isabel helped: They entered this case into Isabel and saw that Ankylosing Spondylitis presented, but a long way down the list.  In fact, it presented at #18.  See figure 1.  As they reviewed the checklist of diagnoses they saw a diagnosis they had not previously considered - Lyme Disease.  It was close to the top and they decided to work the patient up for this.  See figure 2.  Lyme’s is a disease they had not previously been considered as this patient did not live in an area where Lyme’s is prevalent.  However, after asking a few more pointed questions the patient recalled a school hiking trip years ago where he could have been exposed to ticks.

Outcome:  The patient was diagnosed with Lyme’s disease and responded well to a 4 week treatment plan.  The patient called the family practitioner after the appropriate 4 week treatment reporting that he was now able to ride his bike for 6 miles and spend an hour batting balls – activities he hadn’t been able to do for the last 4 years.

Conclusion: In this case Isabel helped the primary care physician broaden their differential diagnosis by providing alternatives and prompted him to ask different questions.

You can watch the physician talking about this case from this link http://www.isabelhealthcare.com/home/lakewood_video.

Presentation: A 28 years old female presents with a long history of:

Story: The patient had seen multiple practitioners without resolution.  During a visit with her OBGYN she explained the long standing problem. This clinician decided to use Isabel in order to see if any “not already considered” diagnoses came up.  With the clinical features entered, a rare parasitic diagnosis came up that tweaked the attention of the provider.

How Isabel helped: Based on the Isabel checklist, the clinician asked more questions and was able to determine that his patient had travelled to a region of the United States 10 years earlier where she was most likely exposed to the parasite responsible for this rare disease which often lies dormant in the liver for 10 years.

Outcome:  Tests were done and the diagnosis of Strongyloidiasis was made. With the proper treatment the patient felt much better after years of suffering with the symptoms described.

Conclusion:  Isabel broadened the differential diagnosis and alerted the provider to a rare diagnosis again providing a direction for more pointed questions in order to determine the correct diagnosis. 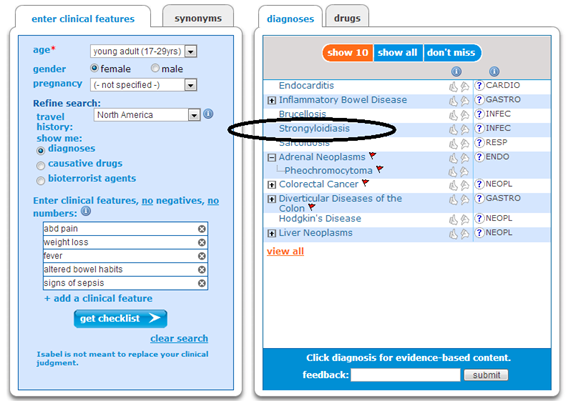 In both of these cases we see how the physicians were faced with patients that had been complaining for years of their symptoms and had not responded to treatment. At a stage when many would give up on these patients, Isabel enabled these non-specialized physicians to broaden their differential diagnosis and consider, what may initially have appeared as real ‘zebra’ diagnoses, appropriately. 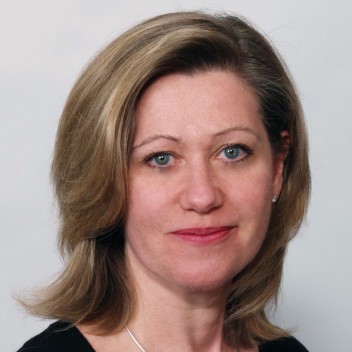 Dawn had over 25 years of clinical practice and healthcare informatics experience and two degrees (nursing and computer engineering) when she joined Isabel in 2010. An essential part of our team, Dawn is our Vice President of Client Services.