The Case Record  12 (2012) of the Massachusetts General Hospital in the New England Journal of Medicine details a 10 month old girl presenting to the emergency department due to vomiting and unresponsiveness which had begun 7 hours earlier.  The baby became more somnolent, and after further work up and tests, she was diagnosed with Ileocolonic intussusception associated with syncope (neurologic intussusception).

Intussusception is a major cause of intestinal obstruction in young children, and it occurs when a portion of bowel slides into the next part of the bowel (like a telescope) which creates a bowel blockage which leads to swelling, inflammation and decreased blood flow to the intestinal parts involved.  It is a medical emergency which should be treated quickly, and it is therefore important to ensure that Intussusception is appropriately considered when constructing a differential for a baby presenting between age 3 months to 3 years with any of the key symptoms such as abdominal pain, vomiting, lethargy, irritability, blood per rectum, pallor or palpable abdominal mass and tests should be performed to rule in or rule out this diagnosis.

The peak age of incidence is 7 months, and 75% of cases are diagnosed in children under a year.  Boys are more commonly affected than girls at a ratio of 3:2.   The baby tends to have colicky abdominal pain lasting for 1 to 3 minutes and in between these episodes the baby behaves normally.

Vomiting can be nonbilious or bilious, lethargy or irritability can sometimes be the only presenting complaint.  Other late symptoms or indicators of severe disease which take longer than 24 hours to develop are occult blood per rectum or frank blood and mucus resembling currant jelly, intractable vomiting, abdominal distention or hypovolemic shock.  Therefore identifying Intussusception early is the key to a good prognosis.

It may be possible to feel a palpable abdominal mass (sausage shaped mass) in the right upper quadrant or epigastrium.  Guaiac-positive stools may be found and occasionally a rectal mass may be palpable or a prolapse through the anus may be seen.  Other less common symptoms which the baby may present with include diarrhea or poor feeding.

Other conditions to rule out are appendicitis (rectal bleeding is not present, intussusception is more colicky abdominal pain than the abdominal pain seen in appendicitis), gastroenteritis, UTI (this can be easily confused with Intussusception) and pyloric stenosis (typically appears between 2 and 12 weeks and presents with projectile nonbilious vomiting after feeding).

To confirm Intussusception in a baby with any of the symptoms mentioned, an abdominal plain x-ray should be carried out which may appear normal but could show an abdominal mass, abnormal gas pattern, air-fluid levels, dilated bowel loops, empty right lower quadrant, “Target sign”, free intra-abdominal air.  Other tests to consider are ultrasound and diagnostic enema.

Once diagnosed then treatment should begin immediately to prevent the condition worsening with appropriate fluid resuscitation. Depending on how clinically stable the baby is, then contrast enema reduction or immediate surgical reduction should be carried out.

A key way to support the early diagnosis of Intussusception is to use a diagnosis checklist tool for the symptoms the child presents with to remind medical practitioners that these are key symptoms that occur in this condition and any young child meeting the criteria for age (under 3 years) and symptom(s) mentioned earlier should be acted upon quickly.  The condition ruled out as early diagnosis is the key to improved outcome. See the diagnosis tool applied to this condition below in the graphic: 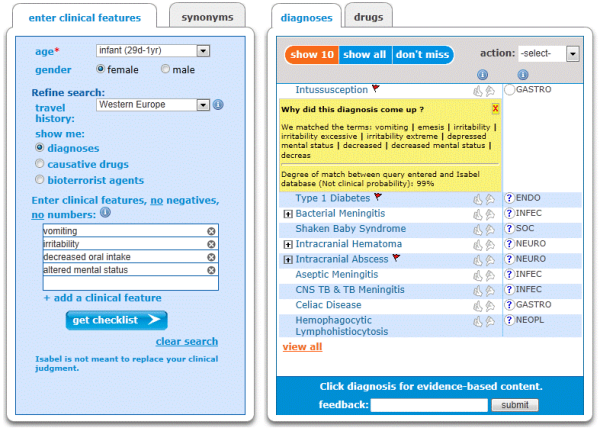 In the Case Record  12 (2012) of the Massachusetts General Hospital, using the Isabel diagnosis system (graphic above) with the symptoms the baby presented with, Intussusception is on the list of likely diagnoses and is red flagged indicating the seriousness of the condition and that further appropriate tests carried out to rule it in or out immediately.

The typical appearance of an intussusception in a patient with Peutz-Jeghers-Syndrome (intestinal polyposis) after contrast enema: the so-called coil-spring appearance and cupping in the head of barium.

Fluoroscopy image during air enema demonstrating a large soft tissue mass in the region of the caecum representing the intussusception (the patient is lying prone hence the caecum lies on the right side of the image).

Request a demo of Isabel or click below to try it free for 10 days.