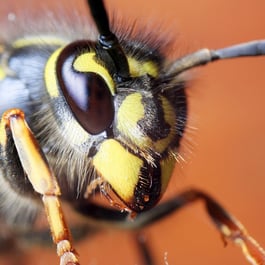 With the weather warming up and summer on our doorsteps human encounters with insects are more likely as they love the summer as much as we do.  Bites from fire ants, stings from bees, wasps and hornets are usually painful.  Bites caused by mosquitoes, fleas and mites are more likely to cause itching than pain. Did you know that reactions to the venom in insect and spider bites cause more deaths than bites from poisonous snakes?

Insect bites and stings can cause a variety of health problems ranging from local skin reactions and mild swelling to gross oral swelling and difficulty swallowing.  If you get stung or bitten, you could be injected with various substances (irritants, venoms, poisons, toxins, anesthetics, enzymes, and anticoagulants), transmit diseases, get a secondary infection or even have a rare systemic allergic reaction (anaphylaxis).

Stinging insects are more likely to produce severe anaphylactic responses than those from bites.  Venom from hornets, wasps and yellow jackets are very similar and so if a patient has a reaction to one of these stings they will more than likely react to the other types as well.  Disease transmission from stings is unlikely.

Anaphylaxis is an IgE-mediated hypersensitivity response to the exposure of an antigen in a presensitized individual.  Exposure to the antigen leads to rapid mast cell degranulation and release of histamine.  This causes capillary leak and edema.  Anaphylactic reactions are non-IgE mediated reactions to certain exposures and do not require presensitization.

How often do they occur?

There is no routine reporting of bites and stings therefore it is difficult to estimate how many people suffer reactions.  In the US, serious anaphylactic reactions account for 40 deaths a year.  It is estimated that about 0.4% to 0.8% of children and 3% of adults who are stung experience life-threatening systemic reactions.  About half of the fatal reactions have occurred in people without previous reaction to stings.

The different kinds of reaction

The most likely, local reaction symptoms

If these symptoms are mild then normally supportive measures can be implemented by using a cloth wrapped ice pack at the site of the bite, local bite ointments applied to the skin and cleaning the wound with water.  If the symptoms worsen then seek medical advice.

These can range from mild to life-threatening.  If a person is exhibiting any of the following then it could indicate an anaphylactic response and the patient must be seen immediately in the Emergency Room without delay as they may need airway protection and the administration of epinephrine.  People who have had a previous anaphylaxis attack will normally carry an EpiPen with them so they can administer their own epinephrine if they have a subsequent attack.

Avoidance of contact with insects is the prime factor for prevention.

If you're unsure about any of the symptoms listed here, or you think you may have had a reaction to a bite or sting, run it through the Isabel Symptom Checker: