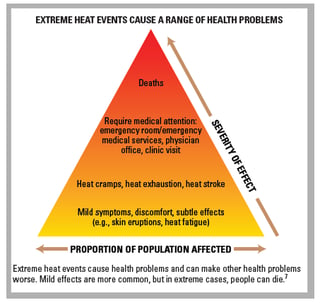 Changes in the climate worldwide have already started to show signs of longer, hotter summers to many of the countries on the Earth, and this will continue to happen in the future. It is thought that by the end of this century, extremely high temperatures that currently occur once every twenty years today, could occur as often as every two to four years. With heat waves currently being experienced in many parts of the world, there will be more contact from patient’s experiencing symptoms related to heat extreme illnesses. An extreme heat event is defined as several days of unusually hot weather conditions that potentially can harm human health, so reading up on heat-related illnesses, and the ways to prevent them, is crucial over the next few days and weeks.

Heat-related illnesses occur when high ambient temperatures overcome the body’s natural ability to dissipate heat.  Those who are particularly susceptible include those over 65 years, young children, people with chronic medical conditions and those living in poverty, the latter being at a higher risk of heat-related mortality.  The various disorders within this group include heat rash, heat cramps, heat exhaustion, heatstroke, heat syncope and the effects of hyperthermia.

How do humans cope with heat?

Humans lose excessive heat by breathing more deeply to increase oxygen levels and exhale heat energy, and, most importantly, by perspiring.  As the body perspires then heat is removed by the evaporation of sweat which carries the heat energy away.  Humidity therefore plays a huge role in how people endure the effects of heat.  High humidity reduces the evaporation rate of the sweat, which leads to a lower rate of heat removal from the body making people feel overheated. Low humidity rates allow for much easier evaporation of sweat, and therefore are generally easier environments in which to cope with excessive heat. It should be noted that the effect of humidity and how people cope with the heat does vary by individual as factors such as obesity, metabolic differences, pregnancy, menopause, drugs and drug withdrawal.

Weather forecasts often quote the ‘Heat Index (HI)’ which gives the ‘feels like temperature’ calculating the temperature and its relativity to humidity.  For example, a temperature could be 32°C with 70% relative humidity, which gives an HI figure of 41%.  A high temperature in Florida with high humidity will have a high HI index value, compared to Arizona where there may be a high temperature but low humidity, and therefore the effects of heat in these two states will vary.  The HI does have its own limitations, as values are calculated based on measurements in the shade, so caution should be used when using the HI as a measure of performing physical activities in direct sun and heat, where the body will have less tolerance.

There are various warning signs and symptoms of a person who is suffering the effects of excessive heat.  They will develop minor symptoms and disorders but if they are not recognized and treated quickly, and if exposure to the heat source continues, the person will continue to overheat, symptoms will progress and the severity of the disorders will increase. Detailed below are some of the disorders which can result from excessive heat and they are ranked in order of increasing disorder severity.  It should be noted some people may not display features of all the disorders and its possible, for example, to develop heat exhaustion without first suffering from heat rash.

Symptoms - Also known as ‘prickly heat’ or ‘miliaria rubra’ is an itchy rash of small, raised red spots that cause a stinging or prickly sensation. They can appear anywhere on the body but are particularly common on the back and stomach. The rash can look like tiny blisters which have mild swelling and itching.

Cause - Heat rash develops when a person sweats more than normal during hot or humid weather, resulting in the body’s sweat glands becoming blocked. This causes the skin irritation which then develops into what we know as a heat rash.

Treatment -  Cool showers or baths can help soothe the rash and also prevent further sweating and blockage of the sweat glands. Drinking plenty of water and wearing loose clothing can also help to treat heat rash.

Symptoms -  Painful, brief muscle cramps where muscles spasm or jerk involuntarily. The cramps usually occur during exercise or work in a hot environment. The muscles involved are usually those fatigued by heavy work such as calves, thighs and shoulders.

Cause -  Heat cramps are caused when the body is put under physical strain with the added struggle of maintaining body temperature. Excessive sweating and not replacing sweat with enough fluids and salt can cause muscles to contract and spasm.

Treatment -  Increasing fluid intake, and particularly focussing on fluids with electrolytes such as coconut water or specialized sports drinks, will help prevent muscles from spasming. If possible, avoiding hot environments and excessive physical activities during heatwaves will also help.

Cause - It occurs when the body in an effort to cool itself causes the blood vessels to dilate to such an extent that the blood flow to the brain is reduced. This causes the patient to faint.

Treatment - As with all fainting, resting, lying down and even elevating legs will all promote blood flow to the brain and stop the patient feeling faint. Moving to a cool place, replacing lost fluids and not doing anything physical until the dizziness has subsided are also recommended.

Symptoms -  Patient will experience fatigue, confusion, irritability, nausea and a high core temperature.  Core temperature in heat exhaustion is elevated between 98.6°F to 104°F [37°C to 40°C] which is lower than that seen in heat stroke, but still cause for concern.

Cause - Heat exhaustion is due to prolonged exposure to direct sun or heat, and is exacerbated when other cooling measures are not taken, such as loose clothing, finding shade and drinking more fluids.

Treatment - Resting in a cool place with exposure of skin will help cool the patient down, as well as fanning, cool towels and drinking lots of fluids.

Symptoms - Heat stroke is defined as hyperthermia with central nervous system dysfunction and can include confusion, agitation, irritability, ataxia and coma. The core temperature in heat stroke is above >104°F (>40°C) but symptoms can also be apparent in those with a lower core temperature.

Cause - Heat stroke should be suspected in the setting of heat exposure through exertion or environmental factors, and occurs when heat exhaustion was not treated and exposure to heat continued.

Treatment - Immersing or misting the patient with water will start to cool core body temperature, and a muscle relaxant may be needed to stop shivering and aid cooling down. 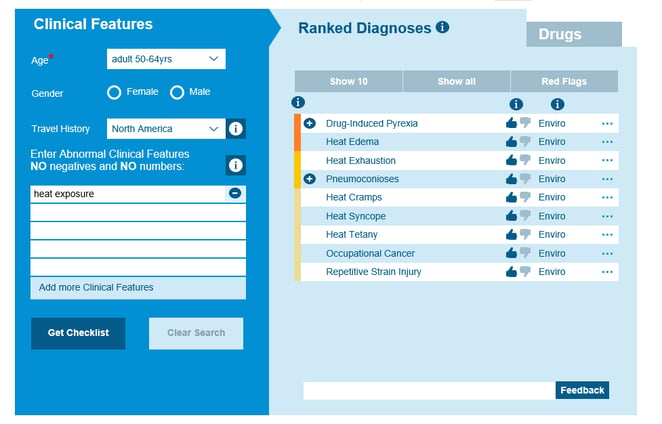 These disorders are entirely preventable if proper information is given on how to avoid heat stress.  General prevention strategies include:

Have you tried the Isabel Ddx Generator yet? Sign up for a free trial and see how you can broaden your differential diagnosis when a patient presents with symptoms of heat-related illnesses: