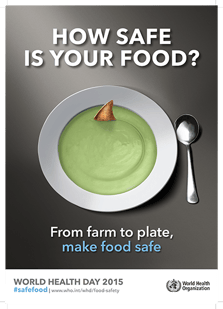 Yesterday marked this year’s World Health Day, meaning the World Health Organization (WHO) select a subject of growing concern surrounding global health to focus on and highlight to the world. This year’s chosen topic is food safety. The emphasis is on the entire food safety journey around the world, “from farm to plate,” which means there’s an awful lot of things we could talk about surrounding food safety and health.

Have you ever had food poisoning? It’s an illness that shouldn’t be wished on anyone, made all the more bitter because it can, in a lot of cases, be easily avoided. We decided to focus on the end of the food safety chain: “how can I make sure the food I buy and cook is the safest it can be?” We’ve got a few pieces of useful information to help you gain the knowledge needed to avoid the horror that is foodborne illness.

What exactly is food poisoning?

Food poisoning, or foodborne illness, occurs when our food becomes contaminated by microbes or toxins. This can happen in a variety of different ways, such as bacteria in dirty water used to wash food, microbes in our preparation environments like kitchen surfaces, or even in the food itself from the beginning, as happens with enterotoxins, which target the intestines in healthy live animals but can cause harm if consumed after slaughter. However, a lot of the bacteria found in food needs to multiply to quite a number before it will have any effect on us. Microbes love the warm and the damp, so leaving your chicken on a table during a humid summer’s day is a party for bacteria. Refrigerating or freezing stops a lot of microbes from multiplying, but unfortunately not all.

What are the different kinds of food poisoning?

Food poisoning can happen in all types of different foods, some of which may surprise you. Reheating rice poses large dangers of the Bacillus cereus http://www.foodsafety.gov/poisoning/causes/bacteriaviruses/bcereus/ bacterium developing, for example. Here are some of the most common causes of food poisoning:

What are the symptoms of food poisoning?

Of course, it varies from one type to another and person to person, but the most obvious and consistent symptoms are:

Incuabation periods vary greatly, anything from 1 hour, for staphylococcal poisoning, to up to 10 days for something like Campylobacter.

What should I do if I have food poisoning?

With vomiting and diarrhea comes a big risk of dehydration, so the most important thing is to keep up your fluids. Most symptoms only last 48-72 hours, so if you are still suffering symptoms after 4 days, see your doctor. If you are not sure whether your symptoms are food poisoning or could be something else, you could run them through a symptom checker such as Isabel, as well trying to think of the food you have eaten over the last week. If you have a high fever, experience bloody stools or signs of dehydration http://www.mayoclinic.org/diseases-conditions/dehydration/basics/symptoms/con-20030056, then you should seek medical attention.