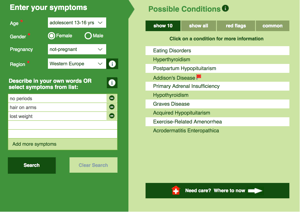 On the Isabel healthcare blog, one of our main aims is to educate, inform and raise awareness about personal health, enabling people to understand their own symptoms or recognize them in loved ones, and open up fruitful discussions with their medical providers. This can include symptoms, causes and diagnosis information on a huge variety of conditions and diseases. These discussions can be on common afflictions such as fevers, or intimidating cancers, rare diseases such as kawasaki disease, and mental health. Mental health particularly has become much more at the forefront of all medicine, as we deal with the ever-growing pressures of modern life and the stresses on our mind that this can take.

This week, we’re focusing on a particular range of illnesses, which affect both the mind and the body and as such can be severely dangerous and potent. NEDA stands for National Eating Disorder Association, and as the name suggests, is a charity focusing on combatting and raising awareness for eating disorders. There are many misconceptions and fears surrounding eating disorders, probably due to the two factors that they often affect teenagers and young adults, an age group that we generally see as quite vulnerable, and because it has an element of mental illness, for which we know there are many stigmas that are slowly being broken down. This week we want to give an introduction to eating disorders, going over the main types and the symptoms to look out for, in the hope that we can start to break down the barrier of discussion around eating disorders and in doing so help lower the prevalence of these devastating diseases.

What is an eating disorder?

Simply put, an eating disorder is an unhealthy relationship with our bodies and the way we consume or expend energy. This often involves food and eating, but can also be to do with exercise and ‘spending’ the energy we get from food. The word disorder is defined as a disturbance to the regular and normal functions of something, and when we disturb normal eating or exercise patterns and our relationship with our bodies, it can multiply into a medical disorder, which means either mentally or physically, or both in this case, our normal functions are compromised. Eating disorders are extremely complex conditions as they affect our ability to think about our bodies in a normal and healthy way, which in turn causes detrimental changes to our bodies.

The different types of eating disorders

There are over 10 types of classified eating disorder diagnoses, with some much more common than others, but they all share the same idea that the patient has developed an unhealthy relationship with the way they get and spend their energy, usually in the form of food. They are not exclusive so you can have more than one of the diagnoses and often people have several. The main types are:

Often just called anorexia and the most well known eating disorder, this condition is characterized by someone who wants to lose weight to an obsessive level, and can often feel an intense fear of gaining or maintaining weight. This is commonly intertwined with a negative view of their own body, or the idea that their own self-worth is determined by how they view their body. The condition generally, but not always, manifests itself as self-inflicted strict calorie controlled diets and restrictions on types or groups of foods. People with anorexia nervosa can also develop obsessive relationships with exercising in an effort to reduce the amount of calories the body is consuming.

Again a commonly known term, and often referred to without the added ‘nervosa.’ This condition is to do with the cycle of bingeing on food and then purging or trying to counteract that bingeing to reverse the effects. Bingeing in this context means eating a larger amount of food than you would expect someone to in a short period of time. This is often hard to define, and does not simply mean eating too many cookies from a bag. The key is that the relationship with the food has become unhealthy, and the person often feels unable to stop themselves, and that they must eat as much as possible in a short space of time in order to feel better. Bingeing on its own is an unhealthy relationship with food and body and is categorized as an eating disorder in its own right, but this is not bulimia nervosa. With bulimia, the crucial difference is that sufferers will then attempt to counteract the negative effects of bingeing, usually by purging through vomiting, laxatives or diuretics, or sometimes through excessive exercise or fasting before or after bingeing.

Although we cover the definition of bingeing in the paragraph above, we thought it important to list this eating disorder, as it is the most common type in the US. Those with this condition will regularly eat too much for their own bodies to maintain a healthy weight, and then experience emotional feelings of guilt or shame upon stopping. Occasionally someone with this disease will purge (see above) but not regularly enough for it to be categorized as bulimia nervosa.

Signs and symptoms of an eating disorder

There are of course different signs and symptoms for the different types of eating disorder, for example someone will bulimia nervosa may regularly excuse themselves to the bathroom straight after a meal in order to purge, or someone with anorexia nervosa may show dramatic weight loss. However, there are some common signs to look for, many of which are emotional or psychological signs rather than physical ones. These are harder to spot and define, but are just as, if not more in the case of eating disorders, important as they directly affect the physical effects.

There are many more symptoms and signs as eating disorders are such complex conditions. We have put some websites at the bottom of this blogpost to help you find out more if you would like to. Recovery is possible, and treatment includes physical measures to regain a healthy weight and fix complications of which there are many. Emotional treatment such as talking therapies are also used to help alter dangerous and unhealthy thought patterns around food and body image, among any other problems that are revealed. Eating disorders are often a result of other mental health issues such as trauma or depression, and as such treating the root cause can help a great deal in recovery. The sooner you or a loved one can recognize an eating disorder and get diagnosed, the easier the journey back to health is, and you never have to suffer in silence. There are many charities and helplines to help with the journey, and we have listed some of them below.

You can also place all your symptoms into the Isabel Symptom Checker, or those a loved one, and discuss the results with your doctor. Particularly with sensitive conditions such as eating disorders, this can be a good way to broach the subject with a loved one and the doctor.