Do I have the flu? Flu vs Cold, and how to tell the difference 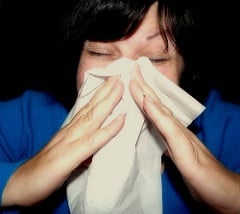 Thanksgiving dinner is over and everywhere, Christmas shopping has begun. It’s the season for giving thanks, giving presents, and for those of you in a colder climate over December, for sniffing. That’s right, as the colder weather and earlier nights settle in you might find a cold striking. But is this a simple bout of the common cold, or are you in for a week in bed while you try to get over the flu and plan holiday get-togethers at the same time? We’ve put together a helpful checklist to determine whether you need to rest in bed, or just grab a kleenex.

What is the difference between the flu and a cold?

The flu and the cold are two different viruses, so despite most people thinking the flu is just a cold gone really bad, they are actually different illnesses. However, the symptoms are extremely similar, and it can be hard, or sometimes impossible, to tell which is which. But there are some tell tale signs that could help your decision on flu vs cold lean to one side.

A cold only lasts a few days

No, this doesn’t mean waiting until you’re better to know which you had. Cold symptoms tend to start with a sore throat, then progress to a runny nose and a finally a cough on the fourth or fifth days. The sore throat will most likely go away within the first few days, so if this is the sort of timeline you’re experiencing, chances are it’s a cold and will be gone within a week. With the flu, on the other hand, symptoms tend to all happen much quicker and at the same time. What’s more, they won’t start to improve for a few days - chances are they’ll get worse before they get better.

Your nose will run with a cold

Flu symptoms tend to include complete congestion, so rather than a runny nose, you’ll experience blocked sinuses. In a common cold, the nose will run with a watery like substance for the first few days, and this will become thicker as your body begins to fight off the infection.

You probably won’t get a fever

Although not impossible, and more common in children, you generally won’t get a fever if it’s just a cold. Mild fevers can still point to a cold, but most say anything above 100F is pointing towards the flu. We wrote a blogpost on drinking enough water, especially when you have a fever, so make sure you take in enough fluids.

Although you may feel slightly achey and run down as your body fights off a common cold, one of the most obvious distinctions of the flu is severe muscle aches. Often it will hurt to even lift your head off the pillow. If it hurts to walk, speak, or think, you probably have the flu.

How can I treat a cold?

Colds will pretty much sort themselves out, and because both flu and colds are viral infections, you can’t take antibiotics to treat them. You can however, relieve the symptoms and help clear your sinuses with decongestants, and painkillers will help get rid of any slight aches or slight fevers.

How can I treat the flu?

The flu, unfortunately, has to be left to run it’s course somewhat, but again, you can relieve the symptoms with decongestants, and help bring down temperatures with over-the-counter medication. The most important thing with the flu is to rest. The more you can take it easy, the quicker your body can get on top of the virus and get you back on your feet. For severe cases of flu, or for those who are more vulnerable such as children and the elderly, some anti-viral drugs can be prescribed by a doctor.

When should I call a doctor?

For the most part, colds and flu can be self-medicated with success, and you’ll be back to your christmas shopping with a few weeks. However, there are sometimes complications, and should this happen, we recommend you put your symptoms into the Isabel Symptom Checker and visit your doctor. If you have any of the following symptoms, it could be a sign of a secondary infection such as sinusitis, or another complication:

If you experience any symptoms that concern you, put them into the Isabel Symptom Checker and discuss the findings with your doctor: