The current population growth seen in those age 65 years and older is driven by the baby boom generation.  Its noticeable that many babies were born in the post war era and by 1950 infant mortality had declined rapidly so more babies born were surviving and now those babies are in the over 65 years of age category and are living longer.  With increasing numbers of older age patients presenting for care one of the greatest challenges is forming an accurate and appropriate differential diagnosis in this population.

Some key points to consider with regards to how symptoms present in this population:

History and examination in older people

Patient histories in the older patient can vary as much as the patient themselves but when taking a history you should consider these factors:

You must obtain an accurate and comprehensive history, which will be time consuming due to the length of these histories in older adults, but without this information you may be at risk of making a misdiagnosis or mismanagement of their illness.

If taking a history from the patient is difficult due to their symptoms, then consider other options of people who may be able to help and who know the patient, for example family, care-givers or the ambulance crew if the patient arrived by transport.

Physical exams are more difficult to do in older adults due to time needed for dressing, and a full exam takes longer due to more systems which need examining with identified symptoms. The physical examination of the older patient is an essential part in making an informed and correct diagnosis.   There is a much higher prevalence of physical signs and the cause of nonspecific signs or symptoms being found on the physical exam.

Polypharmacy, the simultaneous use of multiple drugs, is a principle drug safety issue in older adults.  The older adult can be on too many medications, inappropriate medication, incorrect medication combinations, or medications being used to treat side effects of other medications.  In the US, the average patient over age 65 is taking 6-8 regular medications at a time.  Twice as many patients over 65 years of age are hospitalized because of adverse drug reactions than the younger age groups.  Adverse drug reactions in older patients are difficult to recognize as they present with nonspecific symptoms which are common in other diseases, for example falls due to orthostatic hypotension, fatigue, cognitive decline, or constipation.  Therefore it is important to obtain an accurate medication history from the patient and consider if these medications are causing their symptoms.

The Isabel DDx Generator can help you work up the differential for the presenting symptoms in your older adult patient. The system composes your differential shortlist of diseases, based on clinical features, test results, age and travel history, that you can then rule in or out.  The causative drugs search can also help you check if your patient’s medications may be contributing to their symptoms. 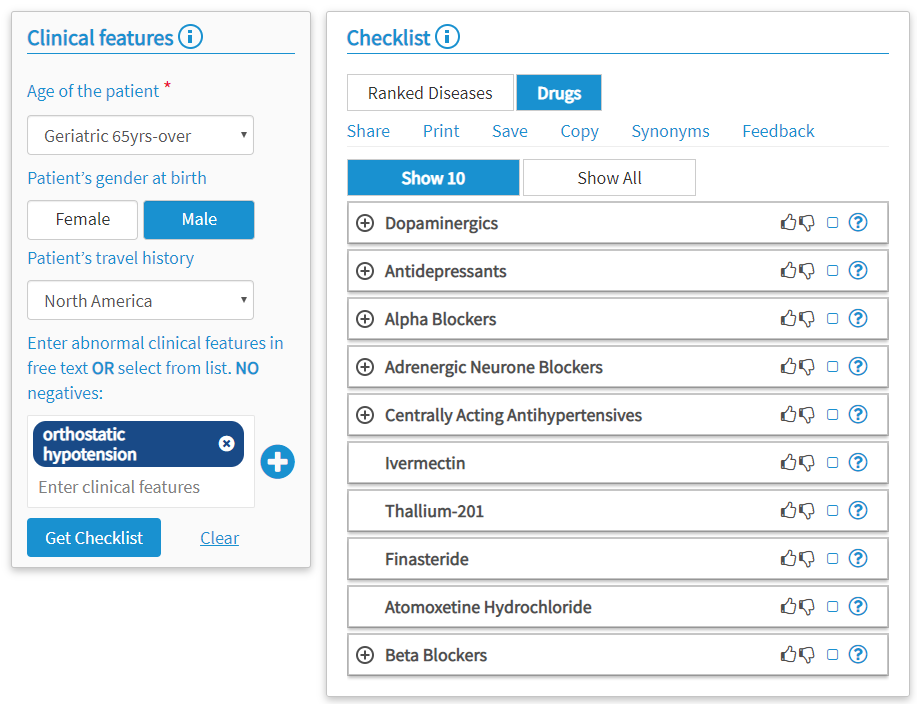 The Isabel DDx Generator will also sort through what possible co-morbidities your older adult may be experiencing as the symptoms could be caused by multiple disease manifestations.

Accurate diagnosis is critical in older adults to avoid unnecessary investigations and treatments, as well as their associated costs and harm. The history taking and physical exam of the older adult must be systematic and vigilant in recording past diagnoses or making a new diagnosis.  The presence of physical co-morbidities has been associated with lower diagnosis accuracy when diagnosing COPD, dementia, Parkinson’s, stroke, acute myocardial infarction, and heart failure. This is thought to be due to concurrent diseases occurring at the same time.  Diagnostic errors are common and have been found to result from overdiagnosis and underdiagnosis.  Using clinical decision support tools can help you sort through your clinical reasoning and ensure your older adult patient receives a timely and accurate diagnoses with correct treatment to resolve their symptoms.

Have you read our white paper on clinical reasoning and why we think using clinical decision support tools is so important? Download it below!