Could I have skin cancer? Melanoma symptoms and causes 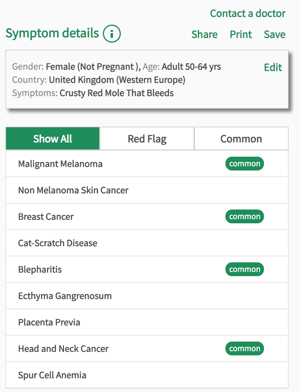 With daily reports of rising temperatures due to climate change, it’s no surprise that skin cancers are also on the rise. We wrote only a month ago about how to protect ourselves against the hot summer sun and the potential dangers to look out for, which you can read here. This month, we are looking in more detail at the potential dangers caused by exposure to the sun – or more specifically, skin cancer. As there are two different categories of skin cancer, each with their own characteristics , there is a lot of confusion about just how dangerous skin cancer can be with many thinking a suspicious-looking mole can be easily removed with no further complications. Luckily this is the most common scenario, but as we will see, some skin cancers can have much more serious implications.

What is skin cancer?

Skin cancer is one of the most common forms of cancer and occurs when skin cells start to develop abnormally. Skin cancers can be divided into non-melanomas and melanomas, otherwise called malignant melanomas. Of the two, melanomas are more serious, but are also thankfully much less common. Both cancers are on the increase according to the World Health Organisation. Worldwide there were around 300,000 new diagnoses of malignant melanoma in 2018. The figures for non-melanomas are more unclear as many aren’t reported, but the World Cancer Research Fund estimates a minimum of a million new cases annually. The highest incidence of both cancers is in Australia and New Zealand due to the depletion in the ozone layer there.

The main culprit is over-exposure to ultraviolet light, i.e. sunlight and light from sunbeds and sunlamps. You might have heard about the different types of ultraviolet light and how they can damage our skin. If not, read our blog about protecting our skin from ageing and cancer. Over-exposure to UVB is thought to be the main cause of melanoma, although the jury’s out as to whether UVA might also play a role. Other risk factors which can increase your chance of developing any form of skin cancer include:

As with most illnesses, prevention is better than cure and while neither melanoma is fully preventable, you can massively reduce your chances by avoiding over-exposure to UV rays by using high-factor sunscreen, covering yourself up as much as possible and not exposing yourself to the sun at the hottest time of day.

Also known as a rodent ulcer, this is a cancer of the basal cells that are found right at the bottom of the epidermis. Around 75% of skin cancers are BCCs, which tend to be very slow-growing and hardly ever spread to other parts of the body. BCCs can appear anywhere on your body but are most likely to be found on exposed skin, and most commonly on your face or neck. They could have any of the following features:

When BCCs are treated in their early stages they are nearly always completely cured. In rare cases, if left to develop, they can spread deeper into the skin and occasionally into the bones which makes treatment more complicated.

This is a cancer of the keratinocyte cells and it is found in the skin’s outer layers. It’s the second most common type of skin cancer and most patients will be completely cured after simple treatment unless left untreated when it can spread to other parts of the body.  Like BCCs they usually develop in sun-damaged areas. The key features of SCCs are:

As the name implies, Malignant Melanomas (MMs) are more sinister. Developing in the pigment-containing melanocyte cells of the skin, they behave differently from basal cell and squamous cell cancers, in particular concerning the speed with which they can develop, and the fact they have a significant capacity to spread to other organs, bones or the bloodstream. They usually either start off in a pre-existing mole or freckle, or in previously normal-looking skin. They are slightly more common in women, where they tend to appear most commonly on the leg, whereas with men they’re more likely to appear on the chest and back. Sometimes it’s hard to tell the difference between a melanoma and a normal mole, but the following checklist, known as the ABCDE list should help:

Other symptoms to look out for include:

If you notice any of the above signs, in particular those relating to melanomas, see your doctor straight away. This doesn’t necessarily mean you have skin cancer. Other sun-related skin conditions, such as seborrheic warts, which are common in people over 40, have a similar appearance to skin cancers but without the dangers. However, a doctor will be able to tell you if any of your skin markings are suspicious. You can also enter a description of your skin marking into the Isabel Symptom Checker and discuss the results with your doctor. It might also help to take a photograph of the mole in question so you can check to see how much it changes.

If your doctor is not entirely sure if you are showing the signs of skin cancer, they will refer you to a dermatologist or plastic surgeon who might carry out a biopsy, where a small sample of skin tissue is taken for analysis. If there’s concern your melanoma might have spread, you’ll have further tests to check if the cancer has spread to the lymph nodes and, at worst, to other areas such as the brain and lungs.

Whichever type of cancer you have, surgery is usually the main treatment option. This involves removing the cancerous tumour and some of the surrounding skin. Usually the surgery is carried out under a local anaesthetic and the area around the skin damage is numbed so you don’t feel anything. Some non-melanomas can be treated with freezing called cryotherapy, or by radiotherapy and forms of light treatment called photodynamic therapy, but this will all depend on the size, type and location of your cancer. In over 90% of cases of BCCs and SCCs the patient will be cured if the cancer is discovered relatively early. If you have advanced melanoma your treatment will depend on just how far the cancer has spread. You might be offered radiotherapy to kill off cancerous cells or medication designed to slow down the spread of the cancer and reduce its symptoms and extend life expectancy. Chemotherapy is rarely used to treat melanoma. Check-ups are always offered as once you’ve had any type of melanoma , there’s an increased risk of it returning, so it’s important to be extra vigilant in checking any changes to your skin.

If you are concerned about any of the symptoms mentioned in this blogpost, put them into our Isabel Symptom Checker and discuss the results with your doctor.