Could I have ovarian cancer? Symptoms, diagnosis and treatment 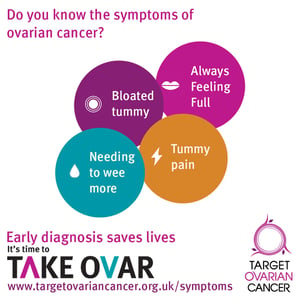 March is Ovarian Cancer Awareness Month in the UK, so we wanted to help charities raise awareness of this often frequently misdiagnosed condition. Ovarian cancer is the 4th most common cause of cancer death amongst women in the UK, and 5th in the US. It’s reputation as ‘the silent killer’ is somewhat accurate, as the majority of women don’t notice symptoms or aren’t diagnosed until the cancer has already spread, making treatment much more challenging. If diagnosed at its earliest stage, up to 90% of women survive 5 years or more but sadly this is just not happening. Figures currently reveal that of the 7,300 cases of the disease in the UK, 4,100 women will die. The UK currently has one of the worst survival rates in Europe. In the US, the figures are hardly any more positive, with nearly 14,000 deaths out of over 22,500 diagnoses each year.

What is ovarian cancer?

Cancer of the ovaries mainly affects women of menopausal age and beyond, though can affect younger women as well. It occurs when abnormal cells in the ovary gland start to multiply, creating a tumor. If malignant, meaning cancerous, and left unchecked, it may grow and spread to other parts of the body. There are 3 main types of ovarian tumor:

There are also four stages to all cancers, so when diagnosed you will be given a stage. Stage 1 means it is contained with the ovary, reasonably small, and should be treatable, stage 2 refers to a larger tumors, stage 3 suggests it may have spread to surrounding tissues, whilst by stage 4 it may have spread to entirely different parts of the body.

Ovarian cancer is often missed in its early stages because its symptoms can be mild or vague, or could be associated with other conditions such as IBS or ovarian cysts. If you delay reporting your symptoms, or perhaps you’ve been misdiagnosed with something else, the disease can start to spread outside the ovaries and fallopian tubes, making it harder to treat. The other cause of later diagnosis is that there is currently no reliable screening method, unlike cervical, breast and bowel cancers. Early diagnosis is therefore dependent on awareness of the key symptoms which are:

Other symptoms which are more rare but can indicate ovarian cancer can include:

If you notice any of these on a regular basis, see your doctor as soon as possible. It’s also useful to keep a record of your symptoms to help speed up the diagnosis. It’s likely that the symptoms will relate to something less sinister, but if you’re worried, try entering your symptoms into the Isabel Symptom Checker and discussing all the possibilities listed with your doctor. 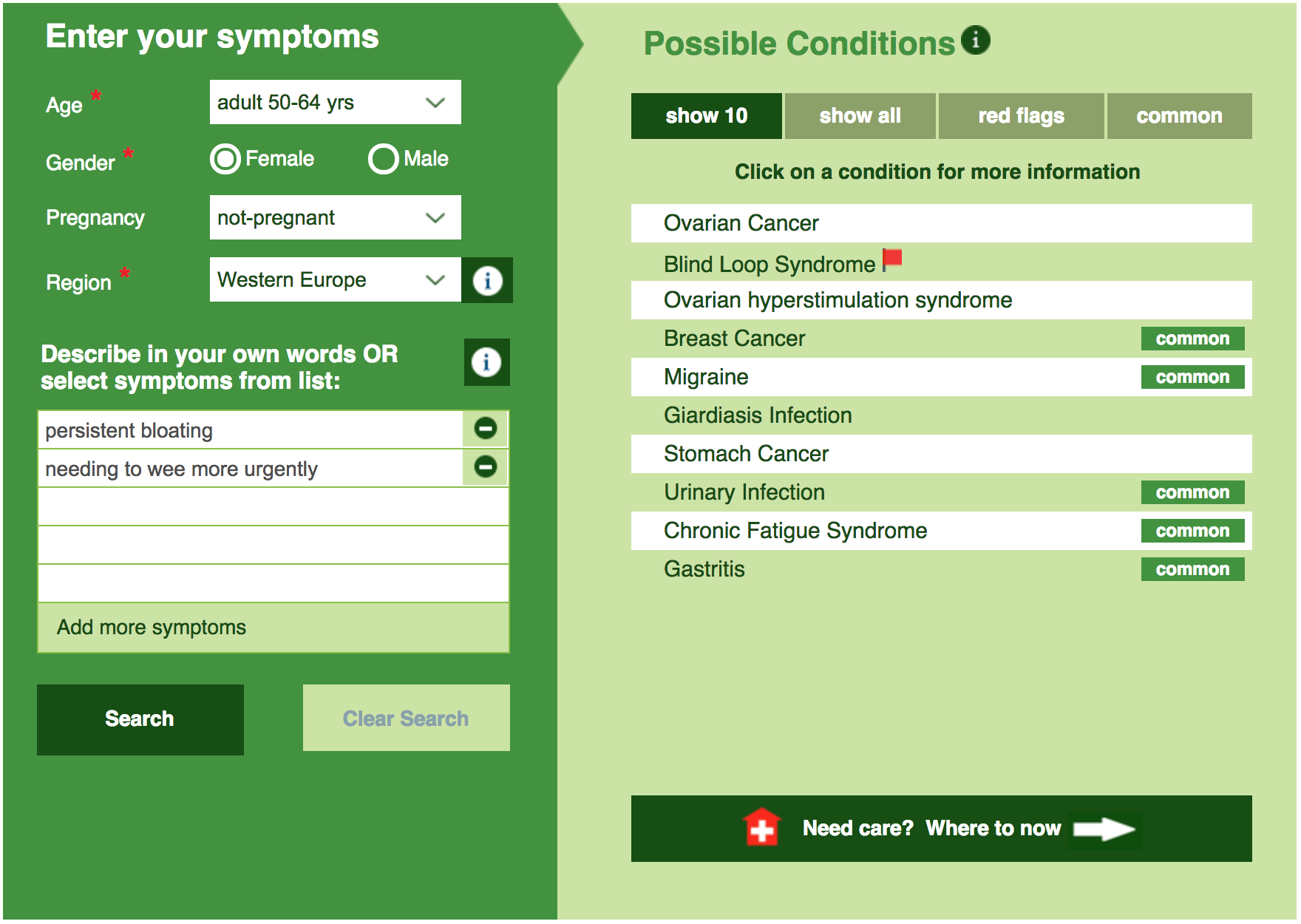 Who is at risk of ovarian cancer?

If two or more relatives from the same side of your family have had ovarian cancer under the age of 50, you may be at a higher risk of developing the disease. You should discuss your family history with your doctor to see if you can be tested for particular genetic mutations. Age also plays a strong part; currently over 84% of cases are in women over 50, with more than 50% of those cases occurring in women over 65. However, all women should be aware of any changes in their body as the disease can affect younger women too. Those who’ve had a long menstrual history, meaning you started your periods early and reached the menopause later than normal, as well as people who have never given birth, are also at an increased risk. Certain medical conditions such as endometriosis create an increased risk as does Hormone Replacement Therapy (HRT).

Diagnosis and treatment of ovarian cancer

If your doctor suspects ovarian cancer, they will test your blood for a certain protein indicating the disease. If this is positive you will be referred for an ultrasound scan which may in turn indicate further tests carried out by a gynaecologist. These may include: a CT or MRI scan; a biopsy, during which a needle is passed through your tummy to remove a sample of ovary cells; or a laparoscopy, when a small tube with a camera is inserted through your tummy to examine your ovaries. If cancer is diagnosed, these tests will also help to understand the type of tumor and the extent to which it has spread.

Treatment then entirely depends on the extent to which the cancer has spread as well as your general health and whether you are still of child-bearing age. Surgery is the main treatment, usually involving the removal of one or both ovaries and sometimes the womb. Most women will also have chemotherapy and occasionally radiotherapy.

Challenge your doctor if you are unsure

As we mentioned earlier, the ‘Silent Cancer’ is not an easy one to diagnose. Doctors will see the symptoms mentioned above in women every day and the vast majority of the time, it won’t be ovarian cancer. If, however, you feel your diagnosis isn’t right and your symptoms aren’t responding to any treatment you’ve been offered, it’s vital that you persist. Take a diary of your symptoms and seek a second opinion, using the Isabel Symptom Checker to help you do further research.