Could I Have Lung Cancer? | Symptom Checker 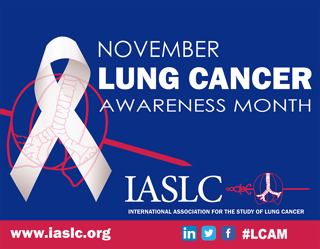 Recently, we blogged about Stoptober, a British initiative to encourage people to quit smoking. Now we’re into November, it’s the awareness month for one of the illnesses most commonly associated with smoking: lung cancer. If the Stoptober campaign is working for you and you’ve managed to kick the habit, then rest assured that your risks of contracting lung cancer will already be going down. In this blogpost, we explains the symptoms, causes, diagnosis and treatments for lung cancer, so you can be prepared and understand your symptoms.

What is Lung Cancer?

With over 44,000 cases being diagnosed each year in the UK and just over 224,000 in the US, lung cancer is one of the most common of the cancers. Sadly, due to the fact it is usually diagnosed late, it is also one of most dangerous, with extremely low survival rates once the cancer has spread to other organs. Cancer develops when certain cells stop developing normally and get out of control, gradually mutating to form a tumour. If this tumour starts in your lung, it’s known as a primary lung cancer. If it starts elsewhere and spreads to your lungs, its called a secondary lung cancer. There are two different types of primary lung cancer: non-small-cell lung cancer which accounts for 80% of cases, and small-cell lung cancer which is the faster-spreading of the two. The type you have will determine your treatment. There are also, like all cancers, different stages of lung cancer, with 1, or I, being the earliest stage, and 4, or IV, being the latest. The earlier you can notice symptoms and catch lung cancer, the higher your survival rate, by a long way. Stage I lung cancer has a five-year survival rate of about 60%, whilst Stage IV is less than 10%.

Unfortunately, lung tumours can grow quite large before any symptoms are noticed. Early symptoms often mimic a common cold which is why sufferers don’t seek treatment straight away. This in turn explains why survival rates for lung cancer are considerably lower than other cancers. The main symptoms to look out for are:

Less common symptoms of the disease can include:

If you have any of the above, visit your family doctor as soon as possible. It may seem like a lingering cold, but you never know for sure until you have things like cancer ruled out by a doctor. You can also enter your symptoms into the Isabel Symptom Checker and discuss the results with your doctor. 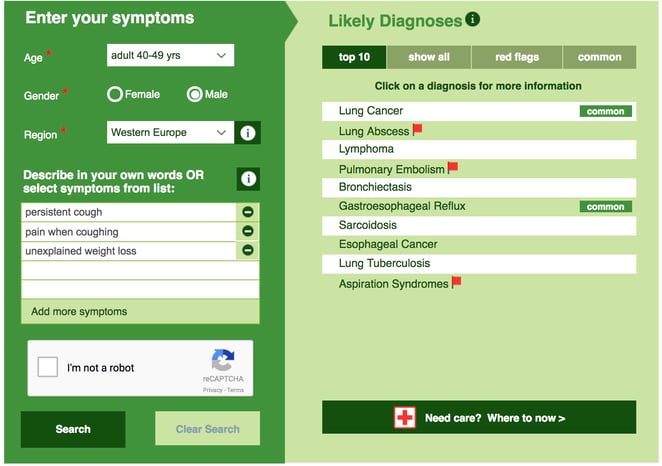 Smoking, as mentioned above, is undoubtedly the single biggest cause of lung cancer, accounting for over 85% of cases. From the moment you inhale smoke into your lungs it starts damaging your lung tissue. If the exposure is short term, the lungs can repair themselves, but repeated exposure means the damaged cells can mutate and, ultimately develop into tumours. A simple rule of thumb to bear in mind is if you smoke more than 25 cigarettes a day you are 25 times more likely to get lung cancer. And it’s not just cigarettes that are to blame; cigars, pipe tobacco and even chewing tobacco are all risk factors, as is smoking cannabis. It’s been estimated that smoking four joints (made up of tobacco mixed with cannabis) can cause the equivalent damage of smoking 20 cigarettes. What is most important, whether you are thinking of quitting smoking or not, is to tell your doctor honestly if you smoke and how much. This information could help get a quicker diagnosis of lung cancer, or even help rule it out sooner so that you can reach a correct diagnosis together.

Sadly, those who are exposed to other people’s smoke also increase their risks of developing lung cancer; sharing a house with a smoker can increase your risks by as much as 25%. Every year in the US, around 7,300 non-smokers die from the disease, and many of these are around second-hand smoke.

Other potential causes include exposure to radon, a naturally occurring radioactive gas that can be found in some poorly-maintained buildings, certain types of asbestos, coal and coke fumes. City living isn’t good for the lungs either: being exposed to large amounts of diesel fumes over a long period of time increases your propensity to developing lung disease.

Inherited genetic mutations can make you more susceptible to lung cancer and in rare cases, people who have never smoked, can also develop the disease.

If you’re suffering from any of the above symptoms, visit your family doctor as soon as possible with your Isabel Symptom Checker results. Depending on your symptoms, you might have a blood test to rule out other possible causes such as a chest infection. If lung cancer is suspected, you will most likely be referred for a chest X-ray, although an X-ray won’t give a definitive answer as it can’t distinguish between cancer and other possible causes such as a lung abscess. The next examination is most likely to be a CT Scan while a biopsy, a procedure that removes a small sample of lung cells for analysis, should give a definitive answer as to whether or not you have cancer. This will also indicate the stage your cancer has reached and whether or not it has spread. This will help your doctor determine what sort of treatment to give you and the likely outcome. Your outlook doesn’t just depend on how much your cancer has spread. Other factors such as overall health, strength and other health conditions as well as your overall response to treatment all play a role in determining your long-term prognosis, and it is only an estimate of your future.

Your oncologist and cancer team will come up with a treatment plan to suit your needs once you have been given an official diagnosis. This will depend on many factors such as:

The most likely treatment options will include one of or a combination of:

Lung Cancer shares November as its awareness month with another big killer, Pancreatic Cancer, which we have blogged about before. Sadly survival rates for neither illness have improved much since the 1970’s, and this is in part due to the lack of understanding surrounding symptoms and causes. While the causes of Pancreatic Cancer are not clear, smoking is considered to play a big role. Campaigns such as Stoptober are vital if we are to help improve the prognosis of these two very dangerous, often fatal, cancers.

Try out our Symptom Checker by putting in your symptoms and researching the results, then you can discuss them with your doctor to reach a correct diagnosis: