Could I have Hodgkin's Disease (HD)? | Nick Clegg and Claire Chambers 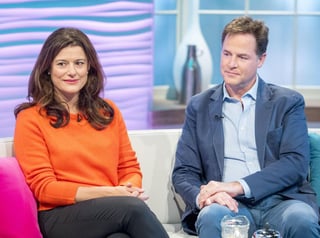 This week the former deputy Prime Minister of England, Nick Clegg, shared the story of his son, Antonio, who has been battling Hodgkin Disease, a type of blood cancer, since September 2016. The family visited the doctor with Antonio, now 15, when they discovered a painless lump on his neck. Thankfully, the doctor they saw considered the rarer, more serious conditions, and Antonio went through the appropriate tests to diagnose him with Hodgkin Disease. Some are not so lucky, however. Hodgkin Disease is an easily misdiagnosed case, as the symptoms are often seen as something less serious and more common. Claire Chambers, a young mum from England, was nearly fatally misdiagnosed when she developed Hodgkin Disease.

Claire’s symptoms of debilitating tiredness, breathlessness and night sweats started when she was four months into her first pregnancy. At this point, she was diagnosed with anemia, and Claire just assumed this was all part of being pregnant. But when the symptoms got worse after her baby was born, she returned to her doctor who then diagnosed post-natal depression.  Antibiotics and an inhaler for the breathlessness were prescribed, however, Claire then started picking up chest infections and tummy bugs. She finally pushed for a second opinion and was admitted into hospital where an x-ray revealed a 10cm tumour on her chest and on either side of her neck. 18 months after her initial doctor’s visit, and with symptoms worsening, Claire finally received her frightening diagnosis of Hodgkin Disease.

What is Hodgkin Disease (HD)?

Hodgkin Disease (HD) and Non Hodgkin Lymphoma (NHL) are types of blood cancer which develop when lymphocytes, (white blood cells) which help protect the body from disease and infection, start behaving abnormally. They quickly start to multiply, collecting in certain parts of the lymphatic systems such as the lymph nodes, usually in the neck, armpit and groin, causing tumours to form. The two diseases share broadly similar  symptoms and treatments though NHL is the more common of the two. And why Hodgkin? That’s thanks to Doctor Thomas Hodgkin who discovered this type of cancer back in 1832.

Who does it affect?

HD can develop at any age but is the most common cancer to affect teenagers and young adults between the ages of 13-24. It can also be more common in adults over 70.

The most common symptom is a small swelling in the armpit, neck or groin. This is usually accompanied by more general symptoms including:

Some sufferers will also have abnormal cells in their bone marrow which may cause any of the following symptoms:

If you are suffering from some of the above, don’t immediately assume you have HD as these are mostly very general symptoms which could be caused by a number of more common conditions. However if the symptoms persist, you should see your Doctor, and mention the possibility of HD so that it can be ruled out if not appropriate. If you’re in doubt, try putting your symptoms into the Isabel Symptom Checker, and take the list with you to the doctor.  When just two of Claire Chambers’ symptoms were entered, HD was top of the list: 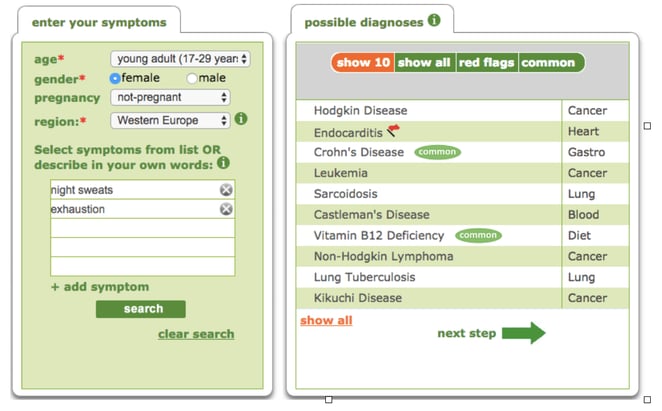 Like many cancers, it’s not known exactly why some people develop HD and others don’t, however a number of factors can increase your risk of developing the condition, such as:

HD isn’t infectious and is not thought to be genetic, although statistically your risk is increased if a close family relative has suffered from it, but it’s not known whether this is due to genetics or lifestyle.

If you’re concerned that you might have HD and the condition has appeared on the Isabel Symptom Checker, you should see your family doctor who will decide whether or not to refer you for a biopsy. This is a minor operation performed under local anaesthetic which involves removing a small piece of an affected lymph node for analysis. It is at this stage that the doctor can determine whether you have HD or Non Hodgkins Lymphoma. If either are diagnosed, you will then need further tests to check whether the lymphoma has spread or not. Depending on your symptoms, a number of different tests can be used such as:

Once you’ve finished all the tests, your doctor will be able to work out what stage your lymphoma is at:

Clearly this is a very distressing period and your doctor will do their best to reassure you and outline the treatment options. While it is obviously very scary, the good news is that in the majority of cases, HD is successfully treated with most patients going on to lead long and healthy lives. The outcomes for Hodgkins Disease and Non Hodgkins Lymphoma do vary slightly. Five-year survival rates are 88% for HD patients and 74% for NHL patients though the prognosis varies enormously depending on the extent the disease has spread.

How is Hodgkin Disease (HD) Treated?

Despite being one of the more aggressive cancers, HD is also one of the easiest to treat. Your treatment will completely depend on the stage of your disease, your age and overall health. A number of doctors will be involved in working out the best treatment plan for you. The most common treatment for HD is chemotherapy, or in some cases, chemotherapy followed by radiotherapy. Steroid medication is sometimes added to the treatment plan for more advanced cases or if the initial treatment hasn’t worked. Occasionally a bone marrow or stem cell transplantation will be required.

The most common long term complication of HL is a weakened immune system which means you’re much more vulnerable to infections. Some patients take regular anti-biotics to prevent further infection. Sadly, any patient receiving chemo or radiotherapy will always run a risk of becoming infertile. Sometimes this is only temporary, but sometimes it is permanent. HD sufferers also have a higher chance of contracting other cancers as a result of their depleted immune system. Keeping a vigilant eye on suspicious symptoms and maintaining a healthy lifestyle are the best ways to prevent future illness.

What became of Claire and Antonio?

After months of gruelling chemotherapy, Claire is now in remission . Despite the possible risks of infertility, tests have revealed this is unlikely, so she’s planning for another baby soon. But she is understandably concerned that a potentially life-threatening illness was so nearly missed: “If I’d accepted my original diagnosis, she says, “I probably wouldn’t be here today.”

Antonio is also in remission, and heading into his final year at secondary school before further education. Antonio’s timely diagnosis was key in his recovery, and Nick Clegg told daytime TV host Lorraine Kelly, “We were very lucky that he [the GP] spotted that it could be something more serious.” Using a symptom checker like Isabel, and discussing the results and all possibilities with your doctor can be the difference between a timely diagnosis and a misdiagnosis.