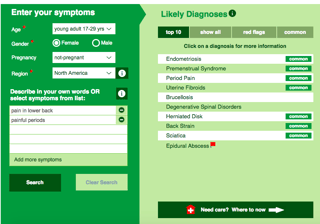 A recent article in the UK ‘Times’ newspaper has highlighted shocking statistics relating to the diagnosis of endometriosis, a common condition affecting girls and women of childbearing age. As many as 10% of women around the world have endometriosis, meaning 176 million people worldwide are suffering with the condition. Despite these numbers, the average sufferer has to wait over seven years, often enduring constant pain and repeated miscarriages, among other symptoms, before finally receiving a diagnosis. Caroline Overton, a senior consultant at the Royal College of Obstetricians and Gynaecologists, has called for more teaching and awareness on the condition, stating that “more must be done to recognise and understand the symptoms and to encourage women to voice concerns about their health.”

So why are women not getting diagnosed soon enough? Endometriosis shares symptoms with many other conditions and manifests itself in different forms. Family Doctors or GPs are trained to diagnose thousands of different conditions, and narrowing down the causes of symptoms which are associated with many other conditions is difficult. Often doctors will go with the most common condition for the symptoms presented, rather than considering all options, due to both time constraints and also the natural cognitive biases all humans have. This is where technology has a very important role to play. Using an online Symptom Checker like Isabel brings up many possibilities for the symptoms entered, and in doing so can help you reach a potential diagnosis with your doctor much more quickly by discussing results.

Endometriosis is a chronic, often debilitating condition which occurs when the lining of the uterus or womb, the endometrium, grows outside the uterus, usually onto the ovaries, fallopian tubes or other parts of the pelvis. Sometimes it can grow on the bladder or bowel, or other key organs. Every month, these cells behave in a similar way to those in the uterus, building up and then bleeding, in the way a period does, but unlike the uterus cells, the endometrial cells have nowhere to escape. This can lead to often quite intense pain, inflammation and a range of other symptoms.

Symptoms can vary enormously from one patient to the next in both type and intensity, and some women experience no symptoms at all, while others suffer years of debilitating pain and heavy bleeding. The American actress and director, Lena Dunham, recently disclosed that after years of pain which she described as “a fire slashing through my uterus” she had an elective hysterectomy. This is no easy choice for a woman of child-bearing age, but apparently her only option to free herself of the symptoms she’d endured for years. Endometriosis symptoms are usually very closely linked to the menstrual cycle and tend to be worse on the days leading up to, or during, menstruation. Key symptoms include:

As we’ve already mentioned, a typical diagnosis can take 7 to 8 years which is far too long. Charities and medical organizations are working hard to educate the public about the symptoms and help improve the diagnosis of this debilitating condition. Using a symptom checker like Isabel will help you come up with a list of possible diagnoses relating to your symptoms, which you can then discuss with your doctor. This should help speed up the diagnosis enormously. As the screenshot below illustrates, just by entering two of the key symptoms listed above, endometriosis comes up at the top of the list. 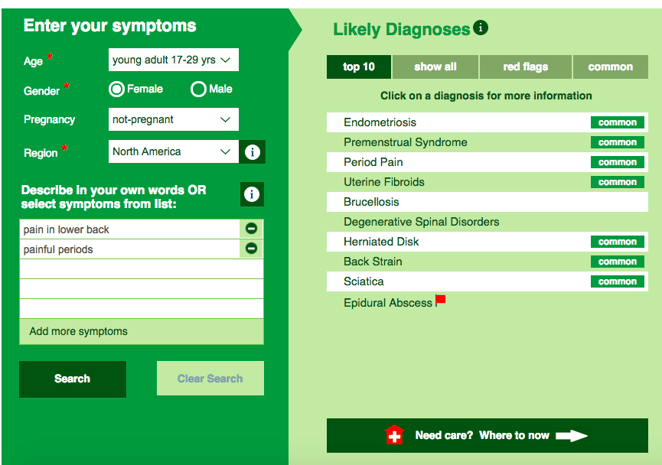 If your doctor suspects endometriosis, they may refer you for an ultrasound that will help to diagnose, but a laparoscopy is currently the only way to definitively diagnose the condition. This involves inserting a small telescope through a tiny cut near the navel under general anaesthetic, enabling the surgeon to study the tissue. This same procedure can sometimes be used to destroy or remove the affected endometrial tissue.

Sadly, there is currently no cure for the condition, but there are a range of treatments that help to ease the symptoms, as well as the ones already mentioned above. The type of treatment you receive will depend on the severity of the symptoms, your age, your desire to have children, and how much it is affecting your quality of life. These include:

One of the main complications experienced by some people with endometriosis is difficulty in conceiving, or repeated miscarriages in the early stages of pregnancy. Between 30-50% of women struggling with fertility issues have the condition. Endometriosis can damage the fallopian tubes or ovaries over time, which leads to problems conceiving. For this reason early diagnosis is essential. Luckily most women with mild to moderate endometriosis will eventually be able to get pregnant and carry to term after treatment. Other possible complications include:

The cause of this endometriosis is so far unknown but several theories have been suggested. It appears to be genetic and runs in families, so check with your family to see if anyone you are related too has been diagnosed. Problems with the immune system also put you at more risk of developing endometriosis. There is also a rare condition called retrograde menstruation, where instead of leaving the body as a period, womb linings flows up through the fallopian tubes and into the organs of the pelvis. This causes endometriosis due to an excess of blood, and is a secondary condition to the retrograde menstruation.

One person with endometriosis described how she started having symptoms at puberty. Once into her 20’s, she experienced bouts of pain and heavy bleeding. She later suffered 7 miscarriages and had 35 consultations before the condition was finally diagnosed. At this stage she made the difficult decision to have her womb and ovaries removed, thereby removing any chances of pregnancy.  She says: “If someone had told me I was infertile in my 20’s I would have had other options.”

Early diagnosis of endometriosis makes a massive difference both in terms of being able to lead a relatively pain-free life and improving your potential to conceive. Using a symptom checker like Isabel, as well as spreading awareness of endometriosis, should help to greatly speed up diagnosis, and consequently treatment, of this condition which causes pain, uncertainty and anguish to so many women around the world.