Could I have bowel cancer? Jonathan Walters and colonoscopies

UK footballer Jonathan Walters hit the headlines recently when he bravely took to social media to tweet, not about his footwork skills on the pitch, but about his experience with a recent bowel screening test. In a bid to encourage more people to get checked, Walters spoke about the heartache of losing his mother at a young age to the disease, using Twitter to get his message out in a series of humorous tweets about the procedures used for bowel screening.

...We managed to complete the journey without any incidents and went through to the ward to prepare for the tube and film crew who were going to have a look up my backside. Once the hospital gown was on I was ready to go...

Walters, who had the all clear, said there was however, a serious message behind the tweets. In the UK, free bowel screening is offered to the over 60’s (soon to be lowered to 50) while in the US, screening is recommended to anyone over 50, and yet the simple test, in the form of a stool sample, is not taken by up to 40% of people in this age category. In this blog we want to look at the screening procedure as well as the raw facts behind bowel cancer which is the 2nd biggest cancer killer in the UK and the US.

What is bowel cancer?

Often referred to as Colorectal cancer, depending on where the cancer starts (anywhere from the rectum or colon through to the bowel), this is one of the most common types of cancer diagnosed in the UK and US with the majority of sufferers being over 60. If diagnosed early, bowel cancer is treatable, and curable. Nearly everyone diagnosed at its earliest stage will survive the disease – early diagnosis really does save lives which is why being screened is so critical. 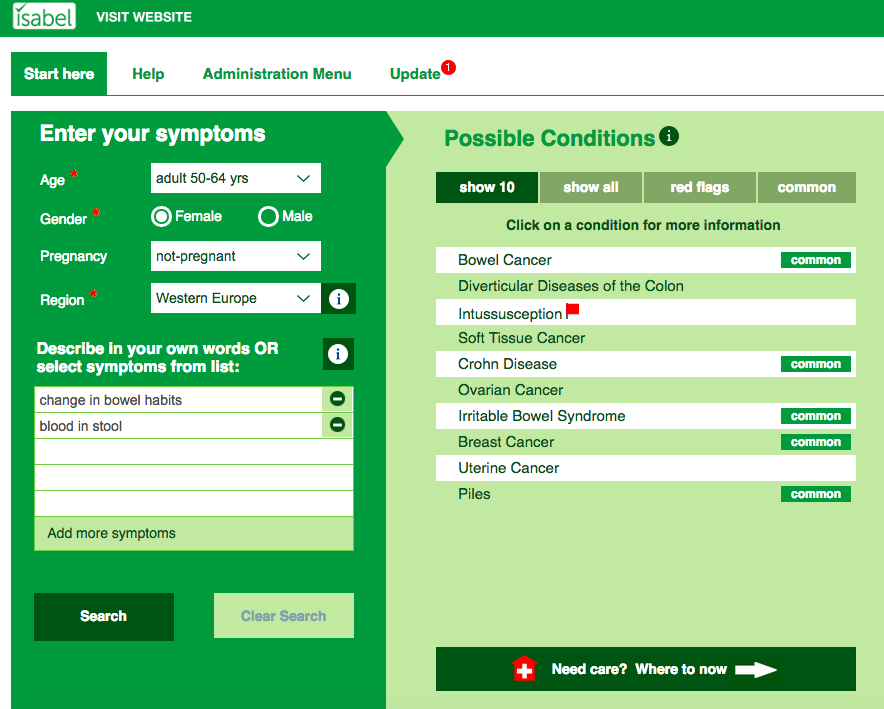 If you have any of the above symptoms, you should see your doctor. Most people with these symptoms don’t have bowel cancer, but it’s important to rule it out as quickly as possible, or even identify pre-cancerous polyps to be treated or monitored.

The procedures for a regular screening test or for diagnosing suspicious symptoms are virtually the same. If you feel you should get tested, or if you have any of the above symptoms, you’ll most likely be asked to provide a stool sample. Your doctor may also ask for a blood sample to check for anaemia, as you may be lacking in iron due to bleeding. If your test results suggest possible bowel cancer, you’ll be referred to hospital for further tests. These will most likely entail a flexible sigmoidoscopy which is a short, virtually painless procedure to examine your back passage (rectum) and part of your large bowel. A sigmoidoscope, or long thin, flexible tube attached to a small camera, is inserted into your rectum and up into your bowel. The camera relays images and can also be used to take biopsies of any suspicious looking tissue. The whole procedure shouldn’t take more than 5 minutes, after which you’re free to go home as no anaesthetics are involved.

In some cases, patients will be given a colonoscopy which is a more extensive look at your entire large bowel. If you want a more detailed (and humorous) description, read Jon Walter’s tweet thread on the subject:

Yesterday I went for a colonoscopy. My Mum, Helen passed away aged 40 of bowel cancer and because of her age I need to be checked regularly for any abnormalities of my bowel. To raise awareness of this monstrous disease I’m going to share my experience...

A colonoscopy is a more lengthy procedure involving mild sedation and takes up to an hour, but is pain-free and patients are free to go home (though not to drive) afterwards. Depending on the results of these tests, a further scan might be requested to confirm whether a suspicious looking polyp is cancerous. If bowel cancer is confirmed, treatment will depend on which part of the bowel is affected and how far is has spread. Surgery is usually the main treatment offered, but may be combined with chemo or radiotherapy. If detected early enough, treatment can cure bowel cancer. Unfortunately, if the cancer is more advanced, a complete cure may not be possible but the cancer can be slowed through a combination of treatments.

As this blog has hopefully made clear, prevention is so much better than cure. Early removal of potentially cancer-forming polyps is much easier and safer than full-blown bowel surgery. We need to do more to persuade the 40% of over 60’s who, whether out of fear or embarrassment, have opted not to take a quick and simple stool test. If you know anyone who falls into this category, encourage them to visit their doctor now. In the words of Jon Walters:

“It’s a vile disease that can be prevented with some education and awareness on early signs of the disease. There’s no shame in doing what I’ve done…”

Can Symptom Checkers be bad for your health?

The number of symptom checkers designed for patient use has mushroomed over the last few years.

Post-Acute Sequelae of COVID-19 (PASC) / Long COVID – What do we know?

As we near the 14-month anniversary since the first outbreak of COVID-19 was identified in December..