Could I have bone cancer? Bone cancer symptoms and diagnosis 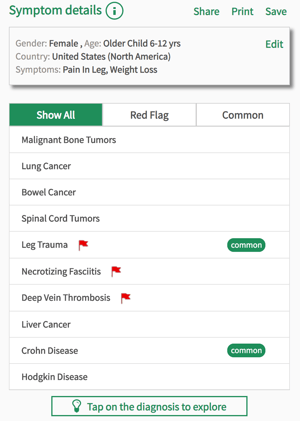 At the end of June, Nixon Whatcott from Utah, USA, passed away after an 18 month fight against bone cancer. He was just 7 years old.  Because of his age, his parents assumed the pain in his leg was just ‘growing pains’ but a visit to his local hospital later revealed cancerous tumours on his leg leading to a final diagnosis of osteosarcoma, one of the most common forms of bone cancer. If the cancer hasn’t spread, survival rates of osteosarcoma can be up to 75%. Sadly Nixon’s cancer had already spread to his lungs and abdomen, reducing his chances to 30%, and after several rounds of chemotherapy, Nixon lost his battle.

What is bone cancer?

Cancer occurs when cells start dividing and multiplying in an uncontrolled way to produce a tumor. The main types of bone cancer are:

Each of these cancers affects different types of cell, so the treatment and outlook will depend on which cancer you have. You will also be told whether you have a primary or secondary cancer. Primary bone cancer starts inside the bone cells whereas secondary bone cancer spreads to the bones from another cancer that started elsewhere, most commonly as prostate, breast, lung, kidney or thyroid cancer. Primary is much the rarer of the two but the symptoms for both diseases are generally the same:

Unsurprisingly, bone pain is the most common symptom. This usually starts off as a feeling of tenderness in a particular area which gradually progresses to a more persistent ache that doesn’t disappear when your body is at rest. While any bone can be affected, bone cancer most commonly develops in the long bones of the legs and arms. As in Nixon’s case, the cancer is often initially misdiagnosed as growing pains, if it occurs in children, or as arthritis in adults. Other symptoms may include:

What are the causes of bone cancer?

It is important to remember that if you experience bone pain, it is highly unlikely to be bone cancer which is one of the rarer cancers. However, if it is getting worse you should visit your doctor who will look for any swelling or lumps and ask whether the pain has affected your mobility. You may then be referred for an x-ray and if any abnormalities appear you’ll be referred to an orthopaedic surgeon or bone cancer specialist for further assessment. The definitive way to diagnose bone cancer is by biopsy, a procedure where a sample of bone tissue is removed for examination. You may also have to have a scan which will ascertain whether the cancer has spread to other parts of your body. After this you’ll be told what stage and grade your cancer is. We’ve written before about this often confusing subject so if you’re having problems understanding the different categories and gradings of cancer, do read our blogpost on this subject.

Putting your symptoms into the Isabel Symptom Checker will also bring up some other suggestions which you can research and then discuss with your doctor. 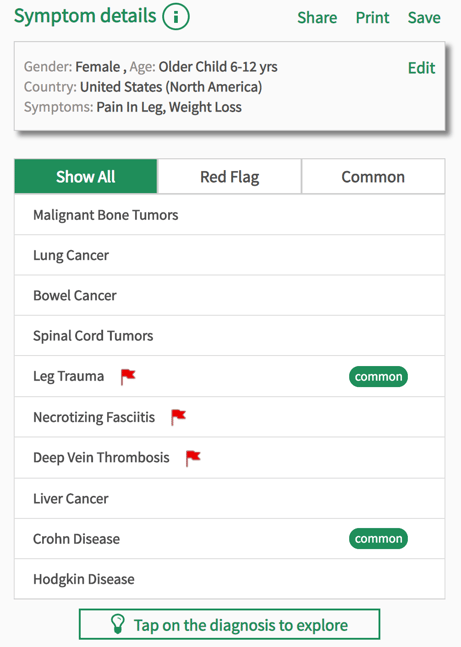 Your treatment will depend on your final diagnosis and how far your cancer has spread. Your age and general health will also be taken into account but overall, your treatment may include any or all of surgery, chemotherapy and radiotherapy. This will all be managed by an orthopaedic specialist, an oncologist (cancer specialist) and a specialist cancer nurse, who together will recommend the best form of treatment options for you. Surgery is often recommended to remove the cancerous part of the bone and it’s usually possible to avoid removing an affected body part in its entirety, though full amputations are sometimes necessary. If the cancer is near a joint, such as an elbow or knee, you may be recommended for a joint replacement.

As with any cancer, early diagnosis is key so if you have any suspicious symptoms, try entering them into the Isabel Symptom Checker and make sure you discuss them with your doctor.