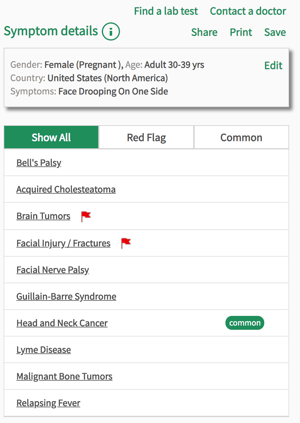 Bell’s palsy can be very frightening to experience or witness, and cause great alarm. Over a matter of hours, muscles in the face begin to lose function, and many mistake these temporary symptoms for the more serious condition of a stroke. While not as medically threatening as a stroke, Bell’s palsy, which most commonly occurs in those between the ages of 15 and 45, is an acute condition that should be treated within hours to encourage the best prognosis. In this blogpost we’ll explain the condition further, talk about the symptoms to look out for and how to differentiate between Bell’s palsy and a stroke, and what to expect with treatment and recovery.

What is Bell’s palsy?

Bell’s palsy is defined as a temporary paralysis of the face. We have a system of nerves, which work in pairs, that emerge directly from the central nervous system in the brain, and out through the brain stem. These are called the cranial nerves. The facial nerves are the seventh cranial nerves, and as a pair they are responsible for sending messages to and from the brain and the facial muscles to enable us to move our face. In Bell’s palsy, one, or in rare cases both, nerves become injured or inflamed, meaning messages cannot be transmitted correctly. Because it is usually only one of the facial nerves that is affected, the face most often becomes paralysed only on one side.

The cause of injury to the facial nerve is not known. It is thought that in some cases the cause can  be viral, for example through viruses such as influenza or pneumonia. Other factors such as stress and a lowered immune system have been indicated as possible causes, and certainly as risk factors. We do know that pregnant women in their third trimester are also more at risk of damage to the facial nerves, probably due to increased blood pressure and general strain on the body.

All the symptoms of Bell’s palsy occur in the muscles of the face, and as we mentioned, in 99% of cases they occur only on one side. The symptoms usually come on very fast, in a matter of hours, and reach their peak at around 72 hours. The loss of control in the muscles can range from mild to severe, and can cause the following:

Is it a stroke or Bell’s palsy?

Many people rightly become very alarmed when their own or a loved one’s face begins to droop over a matter hours, and may suspect a stroke. It is always better to be safe than sorry where a stroke is concerned, but there are some distinct noticeable differences between the 2 conditions:

We’ve written about strokes and how to spot them before, so read up on the F.A.S.T acronym for spotting strokes if you want to know more. Having said this, even if you are reassured that the condition is Bell’s palsy and not a stroke, you should still see a medical professional immediately. Go to the emergency room or call the emergency services if you are experiencing any of the above symptoms of Bell’s palsy. This is because the main development of Bell’s palsy occurs over the first 72 hours, and it is during this time that treatment is most effective.

How long until my face returns to normal?

The main treatment for Bell’s palsy, hopefully taken within the first 72 hours of onset, is steroids. These aim to reduce the inflammation around the facial nerve and therefore restore control over the facial muscles. Steroids help to reduce the inflammation, but the best medicine is time in this case, with most people experiencing improvement, with or without treatment, within a week to 2 weeks. 70% of patients will have a full recovery, and most within 3-6 months. Rest and a non-stressful environment give patients the best chance of full recovery, and some people may have to take time off work in order to recover. In some cases, patients are left with some more permanent nerve damage, often in the form of twitching or partial paralysis. In these cases, physiotherapy is recommended to try and rehabilitate and in some cases improve functionality of the facial muscles.

If you are concerned about any of the symptoms discussed in this blogpost, place them into our Isabel Symptom Checker for free and discuss the results with your doctor. Remember, if you are experiencing the above symptoms, whether or not you think it is a stroke, you should see a doctor immediately.