Could I Have Asthma? | Asthma Symptoms and Diagnosis

According to a number of recent studies, the question of whether or not you have asthma is debatable. Recent Canadian research carried out by The Ottawa Hospital suggests that as many as 33% of asthma cases have been misdiagnosed. The study, published in the Journal of the American Medical Association, examined 613 adults who had been diagnosed with the condition, and of these, 203 were deemed not to be suffering from asthma. The fact that 80% of these patients were taking regular medication for a condition they didn’t have, many of them on a daily basis, shows how important it is to get an updated and thorough diagnosis. A massive 90% of the patients misdiagnosed in this survey have now stopped taking any medication for the condition.

Asthma is a chronic inflammatory lung condition which can affect people of any age, but it often starts in childhood with the child even growing out of it by the time they hit puberty. It is caused by the inflammation or swelling of the airways, which become narrow and clogged with a sticky mucus in response to a range of triggers. This narrowing of the airways in turn leads to the breathing difficulties associated with asthma.

The symptoms above may seem relatively benign, but if left untreated asthma can lead to life threatening attacks and difficulties breathing efficiently, so it should always be taken seriously. 250,000 of the 300 million sufferers around the world die each year from the condition, and most of these deaths could be prevented with the correct diagnosis and treatment. The biggest risk to an asthma sufferer is an asthma attack, where breathing mechanics are restricted to the extent that daily activities become impossible. Recognising the signs that you might be having an asthma attack is imperative to get treatment for it as soon as possible:

If you think you might be suffering from an asthma attack and have no inhaler nearby, or if this is the first time you’ve experienced these symptoms, it is important to visit your Emergency Department as quickly as possible, or if need be, call an ambulance.

Asthma has many complex causes and triggers which is why it’s difficult to get a definitive diagnosis. It is also a highly variable condition which can change by the week, or depending on the time of year. For example, someone whose asthma is triggered by pollen may not show any symptoms during an annual asthma review in winter, but may trigger regular attacks throughout the pollen season. Likewise, those whose asthma is triggered by bouts of cold weather will often present as asthma free in the summer months.

Some people are more at risk of developing asthma than others, including:

How is Asthma diagnosed?

If you’re unsure what you’re suffering from asthma or a different similar condition, type your symptoms into the Isabel Symptom Checker to see if they match a diagnosis of asthma. Several conditions can cause similar symptoms to asthma such as Chest Infection or COPD (Chronic Obstrucitive Pulmonary Disease) so if in doubt, visit your Doctor who will carry out some simple breathing tests. The most common of these are:

How do I know if I have been misdiagnosed with Asthma?

Research from the Canadian study revealed a shock that the most reliable testing procedures, as listed above, were not used in 49% of the cases in the study. Most patients in the survey were diagnosed with the condition simply because they had trouble breathing or had a persistent cough. As a general rule, if the Spirometer has been used and inhalers have relieved the symptoms then asthma is the most likely diagnosis. However, if you’re unsure, especially if the symptoms are worsening or not responding well to treatment, you should seek a second opinion and ask for further tests. Equally, if you’re a long-term sufferer and feel you no longer have asthma, despite still taking medication for the condition, consult your Doctor. Over-treatment of the condition is just as important to correct, as some of the drugs used to manage asthma can have side-effects including muscle cramps, nausea and throat infections. Additionally, children diagnosed with asthma often avoid exercise which can in turn lead to weight problems, and these issues often overtake the initial diagnosis of asthma in a difficult circle to break.

There is currently no cure for asthma, but if handled properly, treatment can help control the symptoms allowing you to lead a normal active life. There are several different types of treatment, and you should talk with your Doctor to decide the best course of action for you. 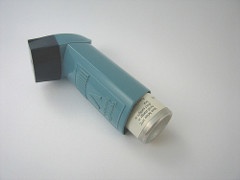 Short-acting Salbutamol inhalers, usually in the form of a blue Ventolin inhaler. This is used to quickly relieve symptoms for a short period of time by relaxing the airways. 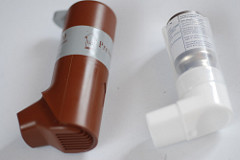 If you need to use the blue inhaler three or more times per week, your Doctor may prescribe you with a Preventer inhaler (usually brown or orange) which contains steroid medication and works by reducing the inflammation of the airways. Preventer inhalers don’t have the same immediate effect of the Reliever inhalers so you should always carry your blue inhaler with you in case of an unexpected attack

Learning to use an inhaler correctly is key in order to get the full benefits. Children will often be given a Spacer device which is easier to use. Spacers are also often prescribed when patients suffer common side-effects such as fungal infections and sore throats.

Learning how to avoid whatever triggers your personal asthma is also key. For example, if you suspect you’re allergic to the dust mite, buy anti-allergen pillow-cases. Learning to recognise the signs of a bout of asthma are vital as the sooner treatment is administered, the less likely the patient is to suffer from a major attack. It is estimated that 75% of hospital admissions for asthma and 90% of deaths could be avoided if correct treatment, such as a Ventolin inhaler, was administered sooner.

What to do when having an Asthma attack

If you’re already taking suitable medication and are using it correctly, your chances of getting a full-blown asthma attack are greatly reduced. However, if you aren’t sure what to do and your breathing is becoming harder:

The good news is that the vast majority of asthmatics, once they’ve been properly diagnosed and taught how to correctly administer their medication, should go on to lead a completely normal and active life. If you are concerned about any of the symptoms mentioned in this post, run all your symptoms through the Isabel Symptom Checker and share the results with your doctor.