Could I have appendicitis? Appendicitis symptoms and removal 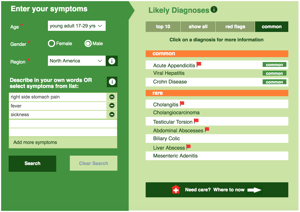 Appendicitis is an acute medical condition where the appendix becomes inflamed and can eventually burst. It requires urgent medical attention, and usually surgery to remove the appendix.

What is an appendix?

Your appendix is a very small organ that sits on the right hand side of your body, near your hip. It’s not clear what the appendix is actually used for, or whether we even use it at all anymore. Other mammals use their appendix to break down hard to digest foods such as raw meat and grass, so it is thought we have evolved our diets and digestive systems over time to no longer require the use of our appendix. A recent study also suggests that it has something to do with immunity in the gut and intestines, although it is too early to tell if this theory is correct. We do know, however, that people are able to live without their appendix with seemingly no consequences long term. This requires surgery however, so unless your appendix is causing you trouble, you shouldn’t need to have removed.

Appendicitis occurs when the appendix becomes inflamed. This can be due to becoming blocked by stool, a foreign body, or in rare cases a cancerous growth. It can also simply react to an infection in the body and become inflamed and sore in this way. Symptoms usually begin when the appendix first becomes inflamed, but can progress very quickly. If left untreated, an inflamed appendix will inevitably burst or perforate. This means the fluids inside the appendix then spread around the area, into and onto other organs such as the intestines. Infections can easily spread in these conditions and this is known as peritonitis, which can be life threatening as it can cause irreparable damage to the lining of the intestines and other surrounding organs.

The biggest indicator of appendicitis is a stomach pain, which contrary to popular belief usually starts as a general ache in the middle of the stomach area. It does, however, quickly localise to the lower right part of the abdomen, and many say it is a sharp stabbing type of pain that will not go away and is worsened with pressing on the area, coughing, or bending over. There are other symptoms which often accompany the stomach pain and they are:

It is important to note that these symptoms, including the stomach pain, are similar to the symptoms of many other common illnesses, such as a stomach bug, constipation, IBS, severe urine infections or a pelvic infection. Monitoring the pain closely is the best way to ensure you don’t miss something like appendicitis, as if you wait too long the appendix could burst within a matter of hours. If the pain is worsening and it is constant and unbearable, you should seek medical attention urgently, so doctors can assess whether it is appendicitis or another acute issue. Our Isabel Symptom Checker allows you to enter all your symptoms in a list, and then research or discuss the results with your doctor. We also have a ‘where to now’ feature which will tell you what kind of medical attention you require. Constant and severe stomach pains should always be assessed urgently, as you can see from our symptom checker’s recommendations: 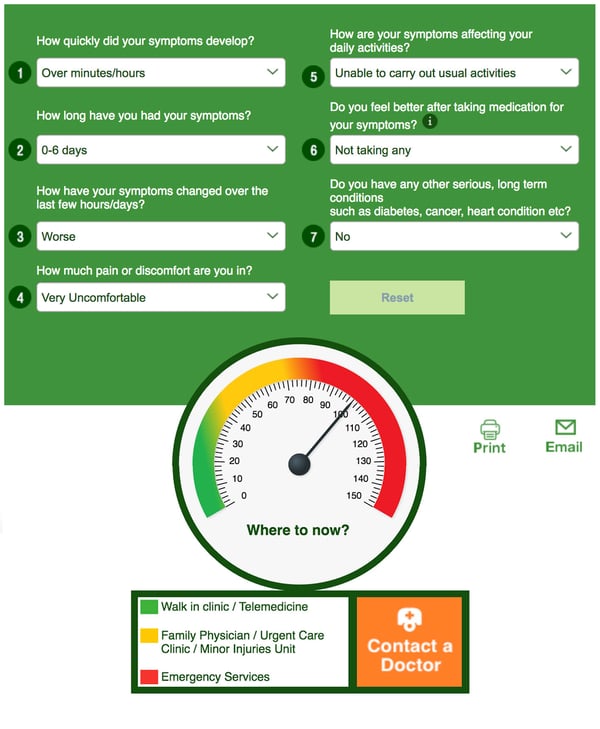 Bloodtests are taken to look for signs of an infection somewhere in the body, and this is combined with a physical examination, including pressing on the painful area, and imaging scans such as an ultrasound. This is all to try and determine if it is the appendix which has become inflamed or infected. Sometimes it is not clear if the appendix is inflamed, but because it is an acute condition and the appendix could burst if left untreated, removal is usually recommended anyway. Removing the appendix requires surgery, which is usually done as keyhole surgery. This involves placing small cameras and tools through a small hole no bigger than a keyhole and cutting out the appendix, and means recovery times is much quicker.

In some cases, however, this is not recommended. If imaging scans show that the appendix has already burst, they may choose to do open surgery to ensure they clean up all the fluids and infection. An incision is usually made in the lower right portion of the stomach to access the infected area. Recovery time is slightly longer here, due to both the more invasive surgery, and also the course of antibiotics needed to ensure the infection is treated.

If you are experiencing symptom similar to those listed, enter all your symptoms into the Isabel Symptom Checker and visit a doctor urgently. They will be able to asses you and determine what treatment you require.