How the Diagnosis Was Made:

Paediatrician Dr. Jennifer Snow who treated Sierra found her presenting symptoms puzzling as they were unusual.  Dr. Snow researched the symptoms and came across a case report of a child with similar symptoms which she said gave her a “aha” moment where she thought that bubonic plague could be the cause and contacted Dr. Wendy Drummond who specialized in Infectious diseases.  Bubonic plague is very rare, but was an important consideration in Sierra’s differential diagnosis work up due to her symptoms and exposure to the dead squirrel. If left undetected, then Sierra may have developed septic shock.  Instead she received appropriate antibiotics and is expected to leave the hospital shortly.

Dr. Snow had to carry out her own research and find case reports for this case in order to make a diagnosis.  The disease is rare and both doctors had not come across a real life case of Bubonic plague before.  The Isabel differential diagnosis list came up with the diagnosis of Yersinia pestis for Sierra’s symptoms.   This could have quickly given Dr. Snow a list of potential diagnoses to consider without having to do extensive research using different information sources, and therefore she would have reached her “aha” moment quickly and efficiently.  Because evidenced-based clinical information is available from the diagnosis on the Isabel information page, she would have been able to evaluate the associated symptoms, investigations and most up to date treatment for this disease with the accessiblity of having it all in one place, as well as easily access online case reports and other medical web resources available on the internet. 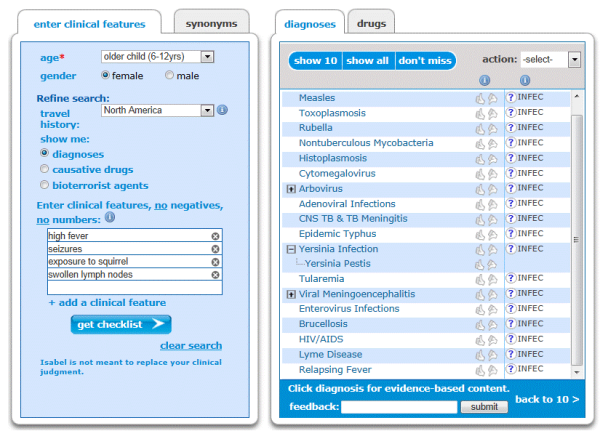 Yersinia pestis causes plague and is transmitted to people by infected flea bites.  Infection presents as a sudden onset of systemic symptoms like fever, painful lymph node swelling (buboes).  Yersinia pestis exists worldwide but particularly Asia and Africa.    It is an infection of wild rodents transmitted through flea bites.  In North America, plague occurs in 15 US western states and its bordering regions including southwestern Canada and north Mexico.  Plague incidence is seasonal, but cases increase in warmer months when animal hosts and their associated fleas are most active and people are likely to be outside.  In the US, squirrels are the most important US host although transmission from domestic cats mainly in veterinary workers has been described.

A rapid diagnostic test against F1 antigen can be carried out and a positive test is considered evidence of plague.  White blood cell counts will be elevated and other tests to consider include blood cultures, bubo aspirate, sputum culture if you suspect pneumonic plaque and CSF culture for septicemic plague.

Treatment for those in a contained setting and diagnoses with plague includes parenteral streptomycin or gentamicin (with or without doxycycline) plus supportive care.

Untreated bubonic plague had a mortality of 50% to 90%.  Septicemia, meningitis or pneumonia caused by plague is normally fatal.  Early treatment and therefore early recognition is essential.  If there is a delay in treatment of longer than 24 hours then systemic symptoms are associated with a high mortality.  Problems result as the disease is rare and not considered as a potential possibility due to its rarity, Isabel differential diagnosis considerations can help plug this gap in knowledge of rarer conditions and ensure patients are diagnosed and treated accordingly before mortality risks increase.