Amenorrhea is the absence of menstruation or monthly periods.  It may occur in women before the menarche (before periods have started), after the menopause, during pregnancy or after an operation like a hysterectomy.  There are two types of this condition: Primary and Secondary. 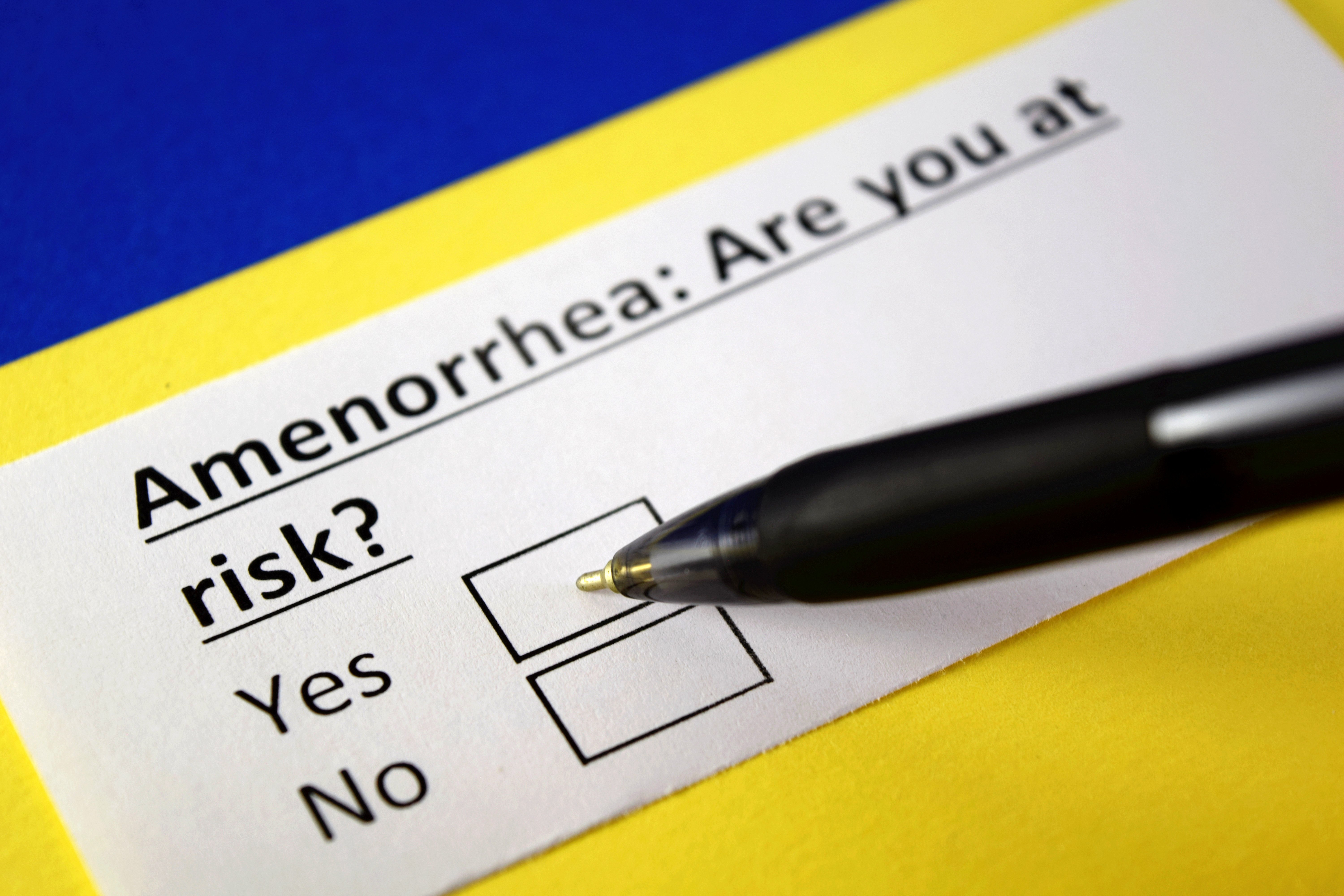 Primary amenorrhea occurs in less than 1% of the population and is when menses (monthly periods) haven’t occurred by the age of 15-16 years.  If other secondary sexual characteristics such as development of breasts or growth of pubic hair are also absent by age 14 years then a Doctor should be consulted.  If these other characteristics have developed but the monthly periods haven’t commenced then it may be advisable to wait until aged 15 years before consulting a Doctor.

In the case of a 30-39 year old woman experiencing amenorrhea the following problems should be considered in partnership with your medical professional to decide on what the cause of action should be.

This is the most common cause of amenorrhea and can be easily overlooked, as females haven’t considered that they could possibly be pregnant.  You can still become pregnant even if you do not have regular periods.  Also, some medical treatments used to treat amenorrhea can increase the chances of pregnancy.  It you do not want to become pregnant and have been diagnosed with amenorrhea ensure you use contraception to prevent pregnancy. It is also worth noting that women who are breastfeeding, even if periods have not yet returned post having a baby, have the potential to become pregnant, so contraception should be used if you do not want to take the risk.

This means that a woman’s hormones are out of balance.  It can cause ovarian cysts and also irregular periods or missed periods plus other symptoms like acne, weight gain, thinning hair (alopecia) and depression.  If left untreated and not diagnosed it can also lead to diabetes and heart disease.

This is an infection of the reproductive organs in women.  Several types of bacteria can cause PID including those of a sexually transmitted nature like Gonorrhea or Chlamydia.  The bacteria normally enter the vagina and if left untreated can spread around the reproductive system, causing the infection to spread and symptoms to worsen.  Symptoms include abdominal pain, fever, painful sexual intercourse, painful urination, irregular periods and vaginal discharge.  As they are caused by bacteria they need to be treated with antibiotics to treat the infection and prevent complications and sepsis arising.

When periods stop due to excessive exercise there is a problem, as the body thinks it has entered starvation state.  It isn’t just the amount of exercise but also types of exercise performed that affect periods, especially those associated with low body weight which include ballet or long distance running.  This happens as the amount of energy being consumed by the body is not balanced by adequate nutritional intake and the body begins to shut down organs which are not essential for survival.  The reproductive system therefore stops menstrual periods as there is not enough energy available to support a pregnancy.

Even in female athletes who train hard and eat plenty, amenorrhea is common.  This is due to the release of stress hormones that lead to feeling so good after exercise - the body’s normal response to exercise.  This release of stress hormones interferes with the reproductive hormones necessary to keep the menstrual cycle regular and flowing.  A diagnosis of exercise related amenorrhea is a diagnosis of exclusion; only when the woman has been resolved for other causes of amenorrhea listed above should this be considered as a diagnosis.

Asherman syndrome is caused by the formation of scar tissue in the uterine cavity. This can occur after several dilation and curettage procedures, where endometrial tissue is taken from the uterus by a health professional to test the tissue.  A severe pelvic infection can also lead to Asherman syndrome.  Symptoms include amenorrhea, repeated miscarriages and infertility.

This is a rare cause of amenorrhea but if there are very high levels of prolactin in the blood (hyperprolactinemia) then this could be a potential cause.  It should be remembered that Hyperprolactinemia can also be caused by hypothyroidism and some medications like Phenothiazines.

There are certain factors which may increase your risk of amenorrhea which include:

How you can help your doctor:

Before your consultation with you doctor, think about the following questions they may ask you.

Keep a menstrual diary, documenting your menstruation cycle, how long a period is, how frequently or infrequently your periods occur, what the color of the menstrual bleeding is and how thin or thick it is. Remember to also document any spotting or vaginal discharge you get in between periods.

When is Amenorrhea an emergency?

Run your symptoms through the Isabel Symptom Checker, download our app for apple and android: