9 Types of Cough - symptoms, causes and when to seek help 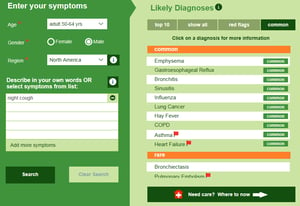 A cough is the rapid expulsion of air from the lungs when the air passages are irritated. Cells within the air passages become irritated by fluids, mucus or material and a cough reflex is initiated, forcing air out of the lungs under high pressure to clear the irritating substances and to protect the lungs. A cough reflex can be voluntary or involuntary. In this post we go over the several types of cough and their common causes, as well as discussing symptoms you shouldn't ignore when you have a cough.

A cough is considered ‘acute’ if it lasts less than three weeks and ‘chronic’ if it lasts longer than eight weeks in adults or four weeks in children.  There are various types of cough and the conditions associated with those coughs can overlap.

Otherwise known as a wet cough or phlegmy cough, this makes a person’s chest feel heavy and the cough brings up mucus or phlegm. Each cough can produce a clump of mucus and therefore these types of cough are called ‘productive coughs’.  Chesty coughs are caused by viruses from colds and flu and they can happen after a sore throat. Chesty coughs are worse in the mornings as you tend to cough less while asleep, during which time the mucus produced by the cells in the air passages builds up overnight, leading to excessive coughing and mucus expelling when you wake up. Other more serious causes of chesty coughs include asthma, heart failure or chronic bronchitis.

This is the most common type of cough.  It is caused by irritation in the throat and they tend to be the most annoying type of cough. It is a non-productive cough as it produces little or no phlegm. Sometimes a post-nasal drip is felt which is caused by inflamed tissue in the nose producing excess mucus, which then drips down into the throat. This post-nasal drip triggers the cough reflex. The most common causes are colds, flu, hay fever or allergic rhinitis. If a post nasal drip is the cause of the tickly cough, then over the counter decongestants and antihistamines can help alleviate symptoms.

A dry cough, another non-productive cough, occurs due to irritants in the air passages and causes can include colds, flu, hay fever, asthma, acid reflux, bronchitis and certain medications used for treating high blood pressure.

This is also a non-productive cough, but it is not caused by physical irritants or the need to expel anything. A nervous cough is aggravated by feeling anxious or stressed and tends to disappear when the person sleeps. Other causes of cough need to be excluded before a doctor diagnoses a nervous cough. To manage this type of cough the root cause of anxiety or stress needs to be addressed.

If you cough worsens or seems to appear only at night whilst you are trying to sleep then this could be an important symptom to identify with your doctor.  Whilst it could be one of the more common causes of a cold or flu, where the mucus pools at night in the wrong parts of your airways when you lie down, it could also be symptomatic of acid reflux. When you are lying down at night the acidic contents of your stomach may travel back up your food pipe (esophagus) whilst you are lying flat triggering a night cough. Additionally, in asthma, coughing  typically not only worsens during exercise, but also during the night.

This is called a ‘chronic cough’ and is defined when a cough lasts more than eight weeks. The most common causes of persistent cough are allergic rhinitis, sinus infections, asthma, gastroesophageal reflux, eosinophilic bronchitis, smoking, infection, and medication side effects. Rarer causes include lung cancer, chest lymphomas, emphysema, sarcoidosis, and fungal infections including coccidiomycosis, histoplasmosis and tuberculosis. As you can see the possible causes of persistent cough are diverse and you should see a doctor if you have a cough which lasts longer than three weeks, or if you develop other symptoms including shortness of breath, chest pain or coughing up blood. If you have other long terms conditions including asthma or Chronic Obstructive Airways Disease (COPD), then you should also see your doctor if your symptoms are worse.

Croup cough specifically occurs in children under 5 and is caused by the same virus as those which cause the common cold, making the airways swell. First signs of croup include a stuffy nose and a fever.  As the voice box (larynx) and windpipe (trachea) become swollen and irritated there is less room for air to move into the lungs and the child produces the hoarse ‘barking’ cough, sometimes compared to the sound a seal makes. If the airways continue to swell, then it can make it more difficult for the child to breathe and they develop the high-pitched squeaking noise of stridor when they breath. The symptoms worsen at night and when the child is upset. Most cases of croup can be treated at home and it will clear within a week. Allow them to breathe some moist air from a steam filled bathroom, ensure adequate fluids are taken, and using over the counter medication such as acetaminophen to relieve fever. If they develop fast rapid breathing, indrawing of breath where the skin pulls in under the ribs when breathing, or they have a bluish tinge round the mouth, then medical attention should be sought.

Otherwise known as (pertussis), this is a serious respiratory infection which causes violent coughing fits. A vaccine against whooping cough is generally administered as part of the vaccination program but whooping cough can spread from non-immunized people to those who haven’t yet received the vaccination including young babies. The ‘whooping’ sound occurs when the child gasps for breath after a coughing fit. Babies may not cough or make the whooping sound but may gag and gasp.  We’ve written about whooping cough specifically on this blog.

Anyone presenting with a sudden episode of coughing or choking should seek immediate medical attention, in case a foreign body is present. We also have a blogpost on what to do if someone is choking.

Acute complications of coughing include:

When to consult a health professional

You should see your doctor if you experience any of the following:

Emergency care should be sort if you have a child who is:

The causes of the various types of cough do overlap and so determining the type of cough and its severity and nature will help you decide where to seek care and treatment if needed. To help you distinguish possible causes of your cough type, use the Isabel Symptom Checker to enter all your symptoms and get a list of possible diagnoses to discuss with your doctor.