60 million US adults say they have experienced a misdiagnosis

The National Patient Safety Foundation (NPSF) and Institute for Healthcare Improvement (IHI) have just published a survey of “Americans’ Experiences with Medical Errors and Views on Patient Safety” and the results are truly shocking.

The NPSF/IHI survey is particularly significant as it repeats and expands on their original survey carried out in 1997 and also the survey The Isabel Medical Charity commissioned from YouGov in both the UK and US in 2005. This means that broadly the same questions have been asked on 4 occasions over a period of 20 years. The sample sizes for each of the surveys has been 2,200 to 2,500 which is regarded as statistically representative of the US population. The answers have been consistent across all the surveys which demonstrates they are very credible and the results are likely to be accurate.

How many people have experienced misdiagnosis?

The shocking bottom-line figure in this most recent survey is that 1 in 4 Americans say they have experienced a misdiagnosis either personally or via someone close to them. This is up from 1 in 6 from the survey our charity commissioned in 2005. The US population of adults is estimated at around 240 million, meaning 60 million Americans have experienced one or more misdiagnoses. This may sound like a large number at first, however, according to Hardeep Singh’s study of diagnostic errors in the outpatient setting, 12 million experience diagnostic errors yearly. To use the jumbo jet measurement that got attention for the seminal IOM report “To Err is Human” in 1999, this is equivalent to over 300 jumbo jets of people who have experienced a misdiagnosis every day for a year!

How credible is this survey?

Those who don’t want to believe the results will take the usual course of discrediting it, saying that these are just people’s opinions and not real data. The crucial point to make is that this survey measures what people think, and what people think is important. It doesn’t actually matter if they are right. Any commercial industry that consistently got these results in their customer surveys would be out of business very quickly. Having said that, some of the results and statistics that have come out of the survey are both extremely insightful, and also fall in line with many other studies on the subject, and this points to the study actually being highly credible.

The survey was carried out by the National Opinion Research Center (NORC) at the University of Chicago with a large sample size of 2,536 adults.

41% of adults in the US said they have experienced some kind of medical error personally or via someone close to them, comparing to 42% in the 1997 survey. 73% of those who said they experienced a medical error said that the error had a long-term or permanent impact on theirs or the patient’s physical health, emotional health, financial well-being and family relationships. In my own family’s experience, we are still actively dealing with the effects of Isabel’s misdiagnosis 18 years after it happened.

Misdiagnosis is the most common medical error

When given a list of 15 different types of medical errors the most common chosen were diagnostic errors. 59% of respondents who said they had experienced a medical error said it was a misdiagnosis. Interestingly, 42% said they “received a diagnosis that didn’t make sense”.

Being insured also played a big part. 64% of those insured thought their provider made an accurate diagnosis compared to just 41% of uninsured. For the ‘timely diagnosis’ section it was 62% for insured but only 37% for the uninsured. 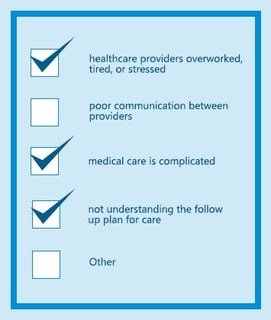 Research on diagnostic error has always shown that it is multifactorial and, therefore, it’s significant that the respondents in this survey, on average, picked 7 factors from a list of 23 that contributed to the error. Half said the error was due to the healthcare providers being ‘overworked, tired and stressed’ and 47% blamed poor communication between providers. Only 5% identified just one single factor. 35% attributed the error to the fact that ‘medical care is very complicated’. I think this shows a good understanding by the respondents of the issues in healthcare and would match many of the issues that healthcare professionals would also cite.

Patients are expecting a misdiagnosis

Although most Americans do not think it likely an error will occur when they receive care, a significantly high 35% still think it ‘moderately or even extremely likely’ that it will. Are there any other dangerous industries with comparable results? I doubt even 35% of soldiers going to war would say it’s moderately or extremely likely they will be killed or injured. Certainly, the comparable figure for those flying on a commercial plane would be tiny.

Improving diagnosis and learning from misdiagnosis

The results of this survey are both fascinating and shocking, yet sadly, very believable. I wonder why we do not have riots on the street? We easily get shocked when even 20 or 50 people are killed or injured in a terrorist attack or in a tragic accident but seem to shrug off thousands being killed every day due to misdiagnosis.

If you are a patient, the message coming over loud and clear is that you need to get informed and make sure you understand your own symptoms as much as possible. If you don’t, then based on this survey there is effectively a 25% chance you will get misdiagnosed. So know your symptoms, question your doctors and start a discussion to reach a diagnosis, not a one-way conversation.

Using differential diagnosis generators like Isabel for doctors, and symptom checkers like the Isabel Symptom Checker for patients, can help broaden differential diagnoses, promote discussions and ultimately improve the diagnostic process, preventing diagnoses from being missed or not considered. Read our white paper on "Why and How to Improve Diagnosis Decision Making" to learn more: