In 2016, the World Health Organization (WHO) reported that measles was at an all time low across Europe, with only 5,273 cases being recorded, and 547 of these being in the UK. In 2015, the UK only had 91 cases confirmed, and this meant the country achieved the WHO elimination status, which dictates that the number of cases reported  has been low enough to stop the disease circulating around the UK. Unfortunately, these figures have now risen for 2017 within Europe to over 20,000 of which the UK accounted for 282 cases.

The US achieved WHO elimination status for Measles in 2000, but similarly to Europe, they have experienced an unprecedented increase in cases. In 2014, the US confirmed a record 667 cases, reported from 27 states. In 2015 they experienced a large multi-state outbreak linked to an amusement park in California.

A Rise in Cases of Measles

Certain parts of Europe have low immunization coverage.  Romania is fighting a huge measles outbreak with 5,500 cases of measles reported in 2017. The cause of this increase has been linked to a vaccine shortage and poor healthcare facilities. A large section of the population in Romania live in severe poverty so the risk of measles being contracted is higher and the disease spreads more easily. Italy has the second highest number of cases reported in 2017, due to Italians being dissuaded from taking available immunisations by anti-vaccine campaign groups. The government in Italy has now ruled that children must be vaccinated against common illnesses before they can enrol in state-run schools.

In contrast the US has low rates of measles compared to Europe. Rates of vaccination within the US have been stable since the Vaccines for Children (VFC) program was launched in 1994 and national coverage levels for the combined Measles, Mumps and Rubella vaccine (MMR) are 91.1% in children aged 19-35 months.

IThe increase in mesales cases within Europe and the US is due to foreign travel. More people are travelling from country to country and therefore are exposed to these illnesses where cases are higher within that country or an infected person is visiting another country and brings the infection with them. If they come into contact with people who are not vaccinated, have a pre-existing condition such as cancer which makes the person immunosuppressed, or if a baby has not yet been vaccinated due to them being too young, then measles can take hold.

Measles is a highly contagious respiratory virus that spreads through the air when an infected person coughs or sneezes. It can happen to anyone of any age, but is most common in children as it is easily passed around schools. Measles has many signs and symptoms, which occur at different stages of the disease, and it can last up to 2 weeks or even longer with complications or a weakened immune system. The disease has an incubation period of between 3-21 days, but symptoms most commonly begin to show 10-12 days after infection.

Early signs and symptoms can last between 2-4 days and include:

A defining feature of the measles is a rash, which occurs around days 2-4. 1-2 days either side of the rash development, however, the patient may have koplik spots. These are small blue-white lesions on bright red background of buccal mucosa, and often disappear once develops.

A maculopapular rash appears 2-4 days after fever onset and begins on the face and head, progressing to the trunk and extremities. The rash will then fade over a few days, but the patient remains contagious for up to 4 days after the rash appears. It should be noted the rash may not occur in immunocompromised patients, and in those people who have had measles vaccinations or have had measles before.

The rash in atypical measles appears first on the distal extremities and progresses to the head. This can occur in young adults aged 11-29 years, and they can become quite unwell with sudden onset of fever. Many atypical measles patients have pneumonia with pleural effusions. 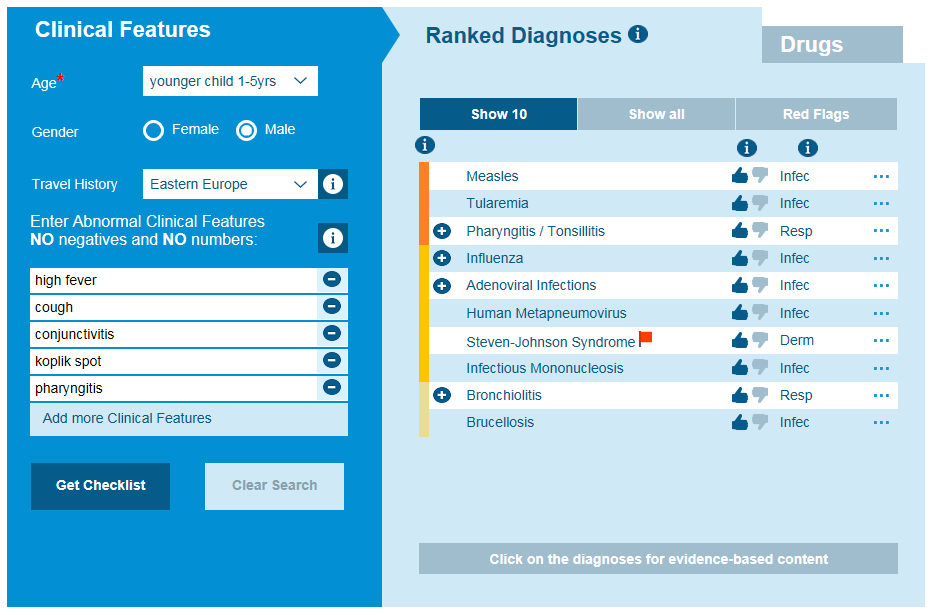 Diagnosis is dependent on clinical recognition of the symptoms and serologic and molecular (RNA) testing. Being aware of the patient’s travel history or contact with other people who have a similar illness will aid the diagnosis so ensure you ask these questions. Think of atypical disease presentations and look for other symptoms which could show complications of measles are occurring.

Measles is a virus, so there is no specific therapy and treatment is supportive care. Hospitalization may be required for treatment of complications or secondary infections. In developing countries where cases are high, the treatment of children with vitamin A to help the immune system fight the virus has shown a decrease in morbidity and mortality. WHO recommends vitamin A for all children with measles worldwide.

The measles virus suppresses the host’s immune system which results in a reactivation of latent infections or superinfections by a bacterial pathogen. Complications are more likely to occur in children younger than 5 years or adults older than 20 years. Pneumonia is commonly seen as a complication and can be due to tuberculosis or another bacterial cause. Pleural effusion, hilar lymphadenopathy, hepatosplenomegaly, hyperesthesia and paraesthesia may be seen as well, and risks to these complications should be assessed upon diagnosis of measles.

Common infectious complications include otitis media, interstitial pneumonitis, croup, encephalomyelitis, diarrhea, sinusitis, stomatitis, keratitis which can cause blindness. In developing countries with the higher number of cases, measles remains a leading cause of blindness.

Rarer complications include purpura fulminans, hemorrhagic measles, disseminated intravascular coagulation, subacute sclerosing panencephalitis, thrombocytopenia, appendicitis, pericarditis, myocarditis and acute pancreatitis. 1 in every 1,000 patients develops an acute encephalitis which can result in permanent brain damage and is fatal in 10% of patients.

Vaccination with the Measles, Mumps and Rubella (MMR) vaccine remains the most important weapon that exists to prevent cases of Measles occurring and then spreading worldwide. The MMR vaccine is very safe and effective. Even in countries like the US where measles has been given the WHO eliminated status, cases can still occur. Measles could re-establish itself in the US if vaccine coverage levels drop. In Europe, the number of cases continues to rise with a 400% rise in 2017 compared to previous years. Research has shown that those who refuse the vaccine or who have limited access to the vaccine tend to group together in communities which is exactly the conditions measles needs to thrive in. Therefore, outbreaks occur in certain areas or communities where many measles cases are seen. These community pockets make it more difficult to control the spread of the disease. Prevention is better than cure, and diligent vaccinations are the best way to prevent outbreaks and reduce the numbers of cases, both in Europe and around the world.

Have you read our white paper on "Why and How to Improve Diagnosis Decision Making?" Select the button below to download it and read all about why at Isabel we think it's so important to tackle and improve diagnosis.