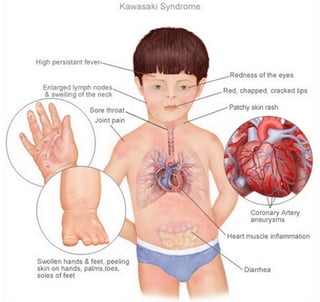 Kawasaki Disease also known as Mucocutaneous Lymph Node Syndrome, Kawasaki Syndrome or Lymph Node Syndrome is a medium vessel vasculitis of childhood.  It causes inflammation in the artery walls of the body including the coronary arteries which supply blood to the heart muscle. Professor Michael Levin from Imperial College London states “Neither the public nor the medical scientific community have adequately appreciated that Kawasaki disease is now the commonest cause of acquired heart disease in children in the UK and other developed countries.”

Due to a lack of awareness and knowledge about Kawasaki disease it is often misdiagnosed or is diagnosed after significant delays.  If Kawasaki disease is recognised early (within 10 days of the illness starting) and treatment initiated, then the disease can be treated and complications of coronary artery aneurysms can be avoided.

The disease occurs worldwide with the highest incidence in Japan and in those who are Asian/Pacific Islanders.  Rates are higher in black and Hispanic children compared to white children.  The peak hospitalizations with the disease are from December to March.  The disease is more common in boys than girls.  76% of children who are diagnosed with Kawasaki disease are under 5.  Siblings of children affected are 10-30% times more likely to develop Kawasaki disease as genome-wide linkage studies suggest single nucleotide polymorphisms in the ITPKC gene confers susceptibility.

This is unknown but the cause is thought to infectious, due to the abrupt onset and resolution of symptoms, seasonal predominance, clusters and epidemics of the disease, and oligoclonal IgA plasma cells found in Kawasaki disease tissue.

Kawasaki disease is a clinical diagnosis.

The key symptoms are: 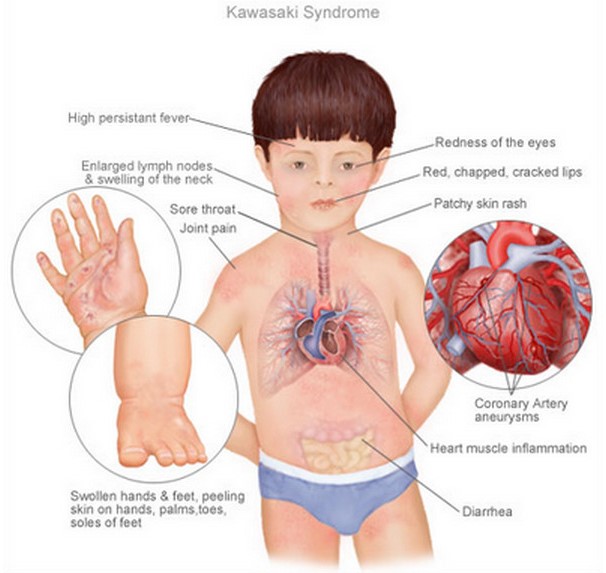 Patients with Kawasaki disease may show:

If Kawasaki disease is suspected or confirmed then an ECHO should be performed as aneurysms of coronary arteries and rarely iliac and axillary aneurysms can form which are serious lifelong complications.  A chest X-ray checking for interstitial pneumonitis and an abdominal ultrasound looking for gallbladder hydrops may also be done.

If Kawasaki disease is confirmed then combination therapy with intravenous immunoglobulin (IVIG) and Aspirin will be instigated.  There is research which proves if this therapy is commenced within the 10th day of illness then it can significantly reduce the incidence of coronary artery aneurysms.  This is the reason why prompt recognition and treatment of Kawasaki disease is so important.  With early diagnosis then the complications which can arise from the formation of coronary artery aneurysms can be reduced.

If coronary artery aneurysms do occur then in consultation with Cardiology team it may be necessary to commence antiplatelet therapy and anticoagulation.  Close follow up is recommended in any patient who has cardiac aneurysms.

Isabel decision support showing red flagged don’t miss diagnosis of Kawasaki disease which often is only recognised after a delay in diagnosis.

Have you seen our whitepaper on Successful Adoption of a tool like Isabel into institutions: 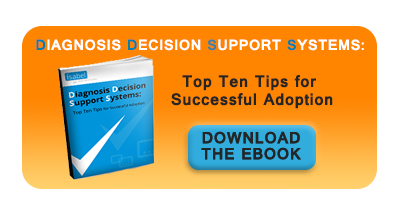