Documenting your Differential Diagnosis Could Save You in a Malpractice Case

We are often asked by clinicians whether they would be better or worse off in a malpractice case if there was a record in the medical notes of their full differential diagnosis and the diagnosis missed was in that list. Our view is that it’s always better to have documented what you have done and thought. If you were wrong and had a reasonable explanation for why you did not think the diagnosis missed and on the list was the most likely and the one that you treated for, then it is better to be able to show that you thought about other possibilities. At the very least you show yourself to be a concerned and caring clinician rather than one that couldn’t be bothered.

A case described in “The Clinical Advisor” this week demonstrates this very clearly.

The case concerned a urology physician assistant (Ms P) who saw a teenage boy who presented 6 weeks earlier in the ED with blood in his urine. The teenager had been seen in the ED by a urologist (Dr B) who had ordered lab results which had revealed both hematuria and proteinuria. The urologist diagnosed a urinary tract infection and prescribed antibiotics.

The teenager had returned to the ED as he had not responded to the antibiotics and was complaining of continued hematuria, sore throat, fever and right flank pain.

The urology PA called the urologist who made the original diagnosis. He maintained his view it was a UTI and said to continue the antibiotics. The PA challenged the diagnosis and questioned whether it could be something else but was overruled.

2 years later the teenager returned to the ED spitting up blood and with pain in his side below his ribs. Tests showed that his kidneys had failed and that he had immunoglobulin A nephropathy, a severe kidney disease that would require hemodialysis three times a week. A malpractice case followed.

“In his certification for the lawsuit, the nephrologist alleged that Dr. B and Ms. P had departed from the standards of practice among members of the same health professions with similar training and experience by failing to include nephritis as a differential diagnosis for the patient when he presented to the ED.

Ms. P explained to her defense attorney that she had had reservations about the diagnosis at the time, but had not noted anything on the chart and had deferred to Dr. B. The attorney explained that without notes proving that she had challenged the diagnosis, they had no choice but to proceed on the basis that the presentation appeared to be a UTI.”

It is interesting to note that Isabel’s list of possibilities for just the clinical features from the initial visit to the ED shows the actual diagnosis at the top of its list but does NOT include UTI within its top 10 suggestions. Had the PA used Isabel it may have given her much more confidence in challenging the urologist’s diagnosis and also she would have had a documented differential diagnosis proving her challenge. 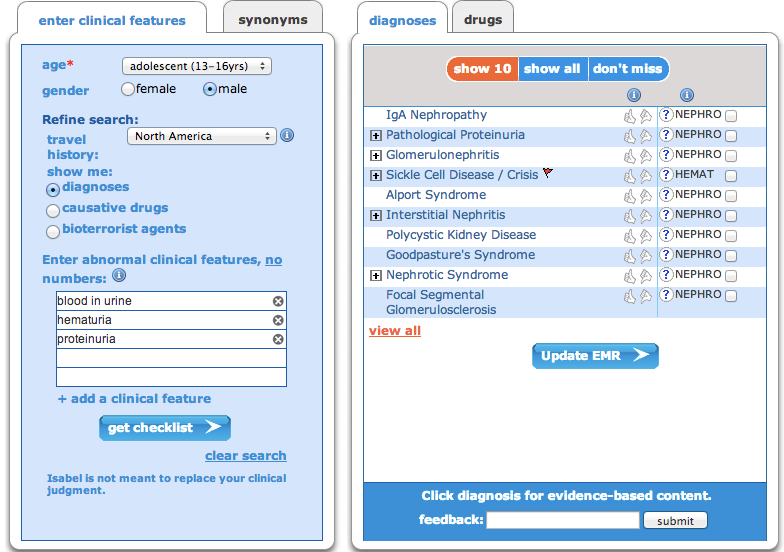